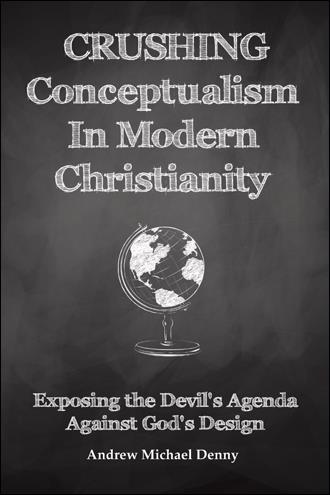 For the most part, Christians understand how we fit into God’s plan, as part of His kingdom. We know that we are fearfully and wonderfully made for God’s pleasure, as products of His workmanship. We were made to be reflections of God; made to obey Him. We are put here to seek and save the lost. But the devil also has an agenda, a premeditated plot against humanity. And he is diligent about keeping Christians blind to his scheme. Part of his tactic is influencing mankind so subtly that we embrace a distorted perception of the world around us. His purpose is to remove biblical absolutes from the equation, in efforts to cause God’s creation to question their Creator. This goes back to Genesis chapter 3, when the devil first attempted to place question marks where God established periods. Now the serpent was more subtle than any beast of the field which the Lord God had made. And he said unto the woman, Yea, hath God said, Ye shall not eat of every tree of the garden? —Genesis 1:3 Conceptualism is defined as “any of several doctrines existing as a compromise between realism and nominalism and regarding universals as concepts.” Common synonyms for the word “conceptual” include 1) theoretical, 2) imaginary, and 3) notional. In essence, conceptualism is the opposite of absolute certainty. It is having your own preconceived ideas of reality. In just a few moments of time, the devil was able to fashion an alternate reality for Adam and Eve. And if he was able to create enough conceptualism to cause the fall of mankind this soon after creation, then how much more could he accomplish in a little over 6,000 years? When Adam and Eve ate the forbidden fruit, the effects were devastating. It triggered a domino effect, a string of evil among humanity. After Adam and Eve were exiled from the garden, one of the next events we read about is the murder of Abel. Interestingly, God’s response to Cain was this: “If you do what is right, will you not be accepted? But if you do not do what is right, sin is crouching at your door; it desires to have you, but you must rule over it.” For God to describe sin as “crouching at your door” is frightening. Yet we are faced with this same reality today, as it is the same evil presently at work. It is continual. It does not sleep. Today it seems that we have minimized the severity of spiritual warfare in the church, despite that it is a reality that must be addressed. For we wrestle not against flesh and blood, but against principalities, against powers, against the rulers of the darkness of this world, against spiritual wickedness in high places. —Ephesians 6:12 There is a selective mentality within the churches today. Depending on the denomination, “truth” appears to be determined by what is commonly understood within a group’s limited capacity of knowledge. When a group holds to a core doctrine, revelation, or statement of faith, it often comes at the expense of further insight. When a collective body of believers emphasizes certain concepts insomuch that other principles are deemphasized, they remain unaware of further realities. This is compartmentalization. In turn, it becomes more about what defines a group’s core identity rather than what aligns with the totality of Scripture. A group can be so focused on what their denomination or movement has accomplished and taught over the years, they become susceptible to this dangerous mentality. Consequently, their only instinct is to disregard what they do not already believe or practice. For we dare not make ourselves of the number, or compare ourselves with some that commend themselves: but they measuring themselves by themselves, and comparing themselves among themselves, are not wise. —II Corinthians 10:12 With regard to the church, I consider this to be the true definition of compartmentalization; measuring and comparing ourselves by ourselves; allowing ourselves to entertain ideas within the confines of our organizational limitations; accepting tradition blindly. When a denomination measures truth by their own traditions, there is no room to mature. This is a dangerous trend that many groups have followed; a trend beginning with compartmentalization but ending in doctrinal isolation. This is not to say that all denominations display this behavior. Of course, some are more extreme than others. Nevertheless, this is the nature of denominationalism. When a core belief or statement of faith is only seen by a select theological community, this tends to be the separating factor. Therefore, to a certain degree, denominationalism is a subtle form of isolation involving a group as a whole. Compartmentalization explains how some church establishments can believe they are superior to others. When a group is only aware of their denominational practices, they cannot properly evaluate what God is accomplishing on a broader scale, among other groups. They are only familiar with their own doctrines and interpretations of Scripture. Thus, many groups could easily be misled, assuming they are the “true church,” while others are not, simply because they have approached the Bible from a biased position. This book was designed to inform all professing Christian establishments what God is revealing to His people on a broader scale. It is to break the spiritually-elite mentality of those who believe their doctrinal position is superior to all others. Ultimately, my prayer is that your ability to learn will not be hindered by your inability to unlearn. Moreover, the goal is to crush the conceptualism in modern Christianity.

A heavy spirit of conceptualism has infiltrated the modern Christian establishments. Our traditions, philosophies, theologies, etc. Everything our beliefs are built upon has been influenced by an elite world-class system. Have you ever felt like there has to be more to our placement in this world than going through the motions of the Sunday morning ritual called “church?” More to this thing we call “Christianity?” If so, this book is what you have been waiting for. A truth movement has emerged. A remnant of modern “Ark Builders” endeavors to awaken those who are still asleep. Every day we see evidence of what the Bible describes as “spiritual wickedness in high places” (Ephesians 6:12). Those who secretly govern our world have an agenda to unite and target professing Christians. The motive is world dominance, and the method is mind control, to brainwash the mass into conforming to what is socially acceptable and politically correct. But we are not ignorant of the enemy’s strategies. This book equips its readers with information exposing this deception, as it bridges the gap between conspiracy theory and demonic activity. You are about to open the door to a world you never knew existed, a reality of which you never knew you were a part. Prepare yourself. Once you see, you will never be able to unsee this realm again.

Andrew Michael Denny, now a three-time published author, has inspired many individuals through his writings. In a world where Christianity has assumed multiple façades by adopting various doctrines and practices, Andy’s passion for knowledge has led him on an undaunted quest for truth. His associations are not limited to any single group, organization, or denomination. Rather, his ministry has allowed him to establish multiple interrelationships among a diversity of Christian networks. In recent years, Andy has become more involved with Christian circles outside the mainstream scene, as he considers the underground setting to be more consistent with the biblical model. With his wife and two children, Andy resides in southern Indiana.