6 Tips on How to Get Published, Part One

Keith Ogorek, senior vice president of marketing for Author Solutions and a published author, offers his advice on how to get your book published. He explains his six tips for holding yourself accountable and eventually self-publishing your work.

6 Tips on How to Get Published, Part Two 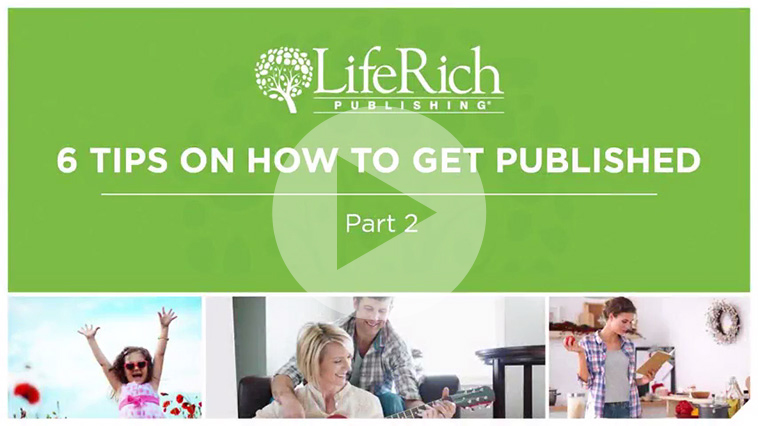 Back to Writer Bites

Hi, I'm Keith Ogorek. I'm really happy that you're going to spend some time watching the webinar, "Six Tips on How to Get Published." In part one of this webinar, we're going to look at six tips that I've learned from talking to many authors on what it takes for you to get published. In the second part, we're going to look at four paths to publishing that every author has available to them today, and we're going to look at the drawbacks and advantages of each path. And then finally, I'm going to give you some tips on how to think about which path is the best for you. So let's get started with part one.

Ten years ago, I was at a writers' conference, where a well-known author was giving the keynote address at lunch time. Before she began her talk, she asked everyone in the audience who was interested in getting published. Well you can imagine, because it was a writers' conference, that everyone raised their hand. Then she said something that was actually very discouraging to most of the audience. She said, "Well most of you know you'll never get published." At the time when she made that statement, it was true. The only way for someone to get published was to find an agent and the agent to sell the book to a traditional publisher, which for many, was a daunting and long task. But today, everything has changed. Now there's more opportunity for authors to get published than ever before. However, because there's more opportunity, there's also confusion because of the number of choices you have. That's why in this seminar, "Six Tips on How to Get Published," I want to help you understand what your options are, because you never know what could happen to your book if you follow through and write it well and get published.

One of my favorite examples of what's possible today is Lisa Genova. Lisa's a name that may be familiar to some of you, because she wrote a very well-known book called "Still Alice." But what many people don't know is Lisa actually self-published her book back in 2007. She had written a book about memory loss and dementia impacting a woman in her mid-50s. At the time, it wasn't a topic that people were speaking about, and it wasn't a topic that most publishers were interested in. But Lisa believed she had a really good book and a story that needed to be told, so she self-published because no publisher would take her. She developed a platform to promote her book, and Simon & Schuster saw the book, decided they wanted it, and Lisa then went on to publish "Still Alice" with Simon & Schuster and also published additional books with them. Even more exciting after that, the film rights for "Still Alice" were sold, and the movie was made based on her book. Two years ago, Julianne Moore was nominated and won the Oscar for Best Actress for her portrayal of Alice in the movie, "Still Alice." She stood on the stage the night of the Oscars and thanked Lisa for writing the book, "Still Alice." Now, I'm not saying if you publish that your book will do as well as Lisa Genova's book did, or that your book will end up being made into a movie, but what I am saying is that if you publish, you never know what could happen to your book, and this is the best time in history to be an author. So in our time together in these seminars, I want to share with you six tips on what it takes to be ready to publish, and in the second part, I'm going to identify the four paths to publishing that are available to you today, the advantages and drawbacks of each path, and how to choose the best path for your publishing journey.

Now, one of the key questions I always try and answer is: "Why do some people publish and others do not?" Having an idea for a book is really easy. Starting to write a book is easy. But writing to the finish is one of the most difficult things most people will ever do. So why is it that some people actually can become a published author? Well, I myself have authored three books, and more importantly in the role I have as a marketing director, I've had hundreds if not thousands of conversations with authors. From those two experiences, I've identified six common characteristics of writers who actually go from manuscript to finished book and impacting people with their writing. So let's look at those six tips.

The first is, set a date when you want to hold a copy of your book. It may be an artificial deadline, you may just need to pick a date out in the future when you want to have your books done, but for many people, it's usually more effective if they tie it around a particular event. You may have a speaking engagement, or a holiday. One of my favorite examples is an author I know who decided he wanted to give everyone who attended his 50th birthday party a copy of his book. So he picked a date and worked towards that end.

So those are two of the tips. The next two are: determine the best time for you to write and block that time on the calendar. What do I mean by that? Well I've had conversations as I said with hundreds of authors and what I've come to see in my own life as a writer, and in the life of many authors, is there is one time during the day when they're more effective writing than others. I remember the first time I was thinking of this as a possibility, I was having lunch with an author that I know who actually has authored more than 22 books and her husband. And I asked her if she had a favorite time or a more effective time to write than others. And before she could answer the question, her husband spoke up and said, "5:30 in the morning." He knew that living with her and watching her work that she was more productive very early in the morning than she was any other time, and so she made an appointment on her calendar, and set that as a time for her to write. If you roll forward about four or five years, I was again testing this theory on someone. In this case, the author was male. I was having lunch again with her and his wife, and I asked him the question, and before he could answer, she said, "10:30 at night right before he goes to bed." So it was interesting that in both cases their spouses could identify and answer the question for them even though the times were different. It doesn't matter what time it is, what does matter is that you commit yourself to writing during that time. So that's the third tip.

The fourth tip is to make yourself accountable to someone. This seems like a very simple thing, but it's actually very important. If you think about any goal you want to accomplish, it's always much easier if you have someone to hold you accountable. Whether it's a support group or whether it's a running buddy or someone like that, finding someone whether it be a friend, an editor, an agent, a publishing consultant, someone who can hold you accountable will help you get to your goal more quickly than if you just try and do it as an isolated person.

So that's four of the tips. So here are the last two. Number five: start planning your promotion before you finish your manuscript. Unfortunately, too many authors don't think about marketing while they're writing. That's actually the most important time for you to think about your marketing. First thing you should do is describe your audience. That's one of the key things to creating an effective promotional plan for a book. Figure out how you're going to reach them and decide what help you will need. Understanding who your audience is will help you decide what's the most effective way to promote your book once you are finished with it. One of my favorite examples is an author that I know who actually has written a book, written two books now, around Irish history. They're fictional accounts, but they're books that she now takes to Irish festivals around the country and promotes. She's found a great audience amongst that group. That's a great example of someone who understands her audience and does something about it.

The last thing I would tell you, and this is a tip that I give to authors and the one that I hear the most about, is plan an event to celebrate the publication of your book. I can't tell you how many times I get emails from authors to thank me for suggesting that they held an event to celebrate their book. Book launch events are a key motivator to getting things done. Now, you can always do it at a bookstore, but I would encourage you to be more creative than that. I, myself, did a book launch for the children's book that I did at a church, because the story was built around the nativity story. I know of a woman who actually wrote a book, and it was based in her hometown and included many of the things that she had seen growing up as part of the description in the book. One of the things she did is she included a restaurant, a local diner, and that's where she did her book launch event. The owner of the diner was so taken with it, that my understanding is there's now a menu item named after her book at the diner, and he sells the books at the cash register. So, if you think about ways that your book can connect with audiences, you will find an interesting way to do an event.