The Bible in Verse

A Poetic Interpretation of Holy Scripture 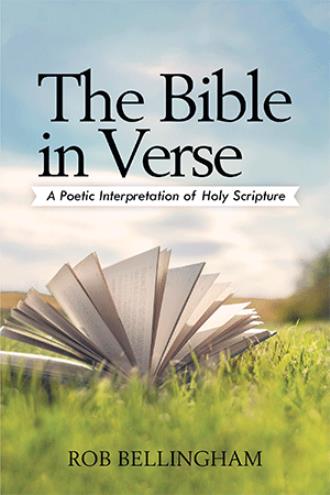 In the beginning, bereshith, the Genesis text begins, God created heaven, earth, and many other things. The world was dark, shapeless, with no life or light, God said “Let’s have light,” so made day and night. Water, water everywhere, in heaven and down below, God sorted into clouds and rain, sea, lakes and snow. Earth was next on the agenda, of God’s creative plan, He filled it with plants, trees, fish, animals, birds, man. He made stars, sun and moon, seasons hot and cold, “Be fruitful and multiply” all creatures were told. Scholars claim that one third of the bible is poetry, more easily recognized in Hebrew than most English versions. In a poetic interpretation of the entire bible inspired by a conversation with God in 2010, Rob Bellingham shares a collection of rhyming couplets intended to be theologically sensitive regarding both gender and doctrine. Bible in Verse is a volume of inspirational rhyming couplets that offers a creative, succinct, and memorable look at a very familiar text.

Rob Bellingham trained for ministry at age twenty, pastored two churches, and traveled with his young family to Bangladesh and India to work with the poor. After a decade, he returned to New Zealand where he worked for TEAR Fund and World Vision and served as international leader of a mission. Now retired, he enjoys playing tennis, gardening, writing, and serving on church mission committees in Auckland and Rotorua.