The Tales of Owl B. Rightback 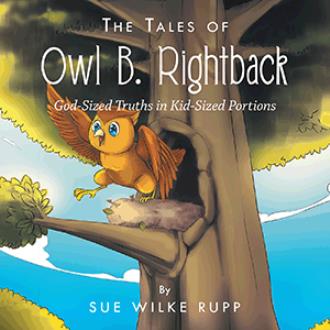 Psalm 91:1 “We live within the shadow of the Almighty…” (TLB) It was a beautiful, sunny day and Callie the caterpillar was inching her way along a branch, trying to get to a leaf so she could have a little snack. Suddenly she stopped, realizing a big shadow had overtaken her! Oh no, she thought, something very big is close to me and it might EAT me! At the same time, Owl B. Rightback saw something moving near his tree limb, so he bent over to get a better look. “Well what do we have here?” he said to himself. “Oh! It looks like a fuzzy little worm!” He put a smile on his face as he greeted the creature. “Hello, little worm! What is your name?” “Uh, uh,” stammered Callie. “Uh, my name is Callie and I’m a calla-pitter, not a worm!” she said with a huff. “But you’re not gonna eat me are you?” OB gently chuckled as he replied, “My goodness, no! I’m not going to eat you. I’d like to be your friend!” “That’s good cuz I’m hungry and I need to get to that leaf so I can have a snack!” With that, Callie started scooting along the branch again, still within OB’s shadow. “Allow me to introduce myself. My name is Owl B. Rightback, but my friends call me OB. And, did you say you’re a ‘calla-pitter?’ Don’t you mean a ‘caterpillar?’” “Oh shucks!” replied Callie. “I get that word wrong every single time. It’s a hard one to say and I AM one! Calla…no wait…cata…catter…yeah, caterpillar! Shew! I finally got it right!” “Hurray for Callie,” said OB. “Good job, my new friend. You sounded it out and then you said it right!” “Thank you, Mr. OB. But you really scared me there for a minute. When I saw your great big shadow, I nearly fell off the tree branch!” “Excuse me for a minute, Callie,” said OB. “Owl B. Rightback!” And off he went to get alone with God. “Father God, do you have something you want Callie to learn?” he asked. A few minutes later, OB flew back to his perch, having heard from the Holy Spirit what he needed to say.

Using a play on words of "I'll be right back," our main character seeks advice from God for himself and for his friends. Owl B. Rightback simply declares his name, then flies off for a moment of prayer. When he returns, he has insight into each different situation. These child-sized stories encourage children not only to go to God with their questions and fears, but they also include life lessons on topics such as wisdom, fear, thankfulness, salvation and others.

With 20 years of experience co-directing children's church for kids ages 2-12, Sue Wilke Rupp brings her lively storytelling to kids once again as Owl B. Rightback searches for wisdom. As a puppeteer and former children's radio show host, she has a unique way of feeding children bite-size pieces of Biblical truth. Mom of 4 and Grandmother of 8, her stories and lessons have been kid tested and approved for decades.