As it is Written

Book One: A Study of Last Things

by Christopher A. Clanton 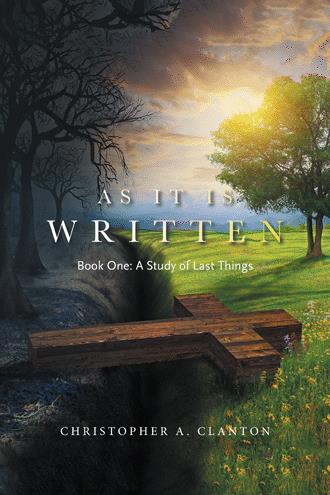 The term “apocalypse” originally meant a revealing or unveiling of something that had been previously hidden, not its destruction. The term usually incorporated colorful or pictorial language that tried to teach a truth that was meant to be hidden from common eyes but plain for those that would seek out its meaning. That is why the Apocalypse of John is more commonly translated as the Revelation of John in our English bibles as the Greek word behind both English words is the same. The colorful language of the Revelation is not unique to the New Testament as many of the Old Testament prophets also spoke with similar terms that we can look back on having now seen how they were fulfilled. By doing so, we can gather the proper meaning of these terms as they were meant in the bible. When we do this, we find these terms are very consistent and once understood very plain. This language, though mostly lost on us today, was very common in the first century when Revelation was written. More importantly, the early Church was made up of many Jews and Gentiles who were familiar with the language of the prophets in the bible and would have been very familiar with this type of language. By and large, the first-century Church relied on the Old Testament for the bible as the new was still being written during this time. We also know that the prophets were emphasized by these early churches as we see the apostles and Jesus quote them more than most other Old Testament books. We shall delve into this to a lesser degree in this book to help our understanding when the needs arise. I daresay that an understanding of the apocalyptic language of the prophets is critical to properly understand the Revelation which was written in the same fashion. This should also be done with a clear understanding of these events built by the non-apocalyptic sayings of Christ and the Apostles to be a guide against errors in the interpretation of apocalyptic writing. I say all this to reveal an issue we have in our modern society. Today, we think apocalypse means the end of the world, but that is not what this word means when dealing with the bible. The Revelation was meant to be a revealing of truth related to specific events that I believe have been shrouded by false teachers throughout Church History. These revelations were meant to glorify truths laid out in the bible by the Apostles, Prophets, and Christ himself, and were never meant to cloud the truth. This is exactly what is declared by the opening verse of Revelation: Revelation 1:1: The Revelation (This is the same word as apocalypse. Revelation is a revealing of something. The subject of which is very clearly laid out in the following words) of Jesus Christ, which God (The Father) gave unto him (Jesus), to shew (the old way of saying show) unto his servants (So the purpose of this revealing was to teach his Church something. The question is what? It is immediately answered) things which must shortly come to pass (So the revealing of the truth about Christ was given to Jesus for the first-century Church to declare things to them that would shortly come to pass. What was going to come to pass is directly linked to a truth about Jesus, a truth given to Jesus by the Father. This should be our first clue among many of what the focus of this book was meant for and it has little to do with our future but much to do about theirs. This is what is plainly declared. The verse ends with how this was to be declared to the first-century churches), and he (Jesus) sent and signified it (Meaning he approved and sent it) by his angel unto his servant John:

Does bible prophecy revolve around antichrist and Israel, or Christ and His Church? Does Jesus return to defeat Antichrist, and vast armies, or does he come in victory to defeat Death? These questions and more will be answered in this book. “As it is Written,” is a labor of love that seeks to challenge the mainstream modern views of eschatology, which is the study of the end times. In this book, readers will learn where the modern teachings came from, and learn that the modern views are less than 200 years old. This book will compile a list of all the modern teachings and then compare them to what Christ and the Apostles taught. This will show a stark difference between what the early church taught and what we teach today. The book concludes by analyzing several key passages that have been misinterpreted by modern teachers and looks back on how our forefathers understood them and sees which interpretation is more accurate to the texts.” When all is done, readers will be left with a hopeful outlook on the future and the promise of a glorious reign of Christ culminating in His victorious Second Coming. This is all done without prophecy charts, or going back to the Greek, rather it takes the simple approach of asking the question, what did Jesus say about His Second Coming, and what did his disciples teach? It turns to the bible and lets them answer this question from their own testimony. This will also reveal how these things were promised even in the Old Testament.

Christopher A. Clanton lives in a small mountain community in Southern California with his wife Amber. He has a passion for the Church and a desire to see the people of God return to the simplicity of the gospel, a love for the bible, and a rich hope in the glorious promises of Christ. He is a bible teacher at a local Baptist Church, where he teaches adult Sunday-school every week. He has spent the last several years studying Church history and writings from Christians giants that lived in centuries long past. He has a love for the bible and a desire for all to know and understand its beauty and lessons.