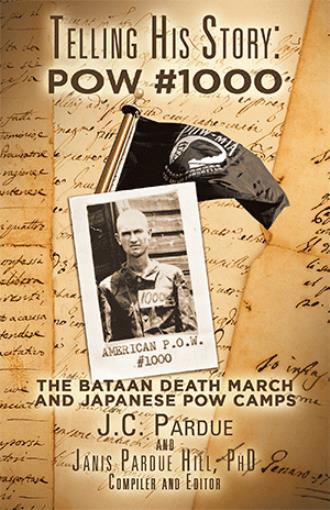 The Japanese captain said: “You will all die here.” The finality of his words was ominous, but they were the words of an enemy the American and Filipino captives had come to know as they were force-marched northward on the Bataan Peninsula. They took hope in the fact they had survived thus far. They had already witnessed the brutality of the Japanese guards on the infamous Bataan Death March as they bayonetted, shot, beheaded, or buried alive any who fell. But then came the camps where the POWs lived and walked with Death.

Such was J. C. Pardue’s nightmare. In Telling His Story: POW #1000, Dr. Janis Pardue Hill, as primarily a compiler and editor, provides the details of his story. This memoir covers both his entry into the US Army Air Corps and his experiences in, and after, World War II: the battle to hold Bataan; the surrender of Bataan; the brutal, inhumane treatment on the Death March and in the POW camps; as a slave in Japan, and as a survivor determined to live a Christian life.

Most prominent among her father’s memories was the miracle of his Bible. Surviving a direct hit from a fragmentation bomb, confiscation in a POW camp, and disposal on a Hell Ship, his Bible always returned. His most treasured possession, that Bible came home with POW #1000, who attributed his survival to the faith acquired and absorbed from the weapon he considered the most valuable of all—his Bible.

Janis Pardue Hill, PhD, a retired university professor and lifelong educator, holds a BS in English education, an MA in literature, and a PhD in curriculum theory. She has worked in secondary and university classrooms, as a Program Coordinator in the Louisiana Department of Education, and as a Curriculum Coordinator in the Ouachita Parish School System. Dr. Hill and her husband, Charles A. Hill Jr., have two children and three grandchildren and live in North Louisiana.