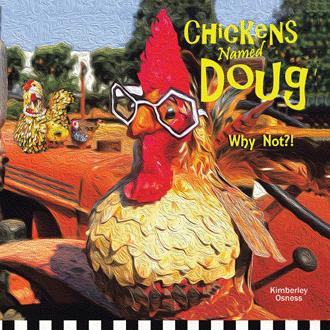 Chapter 1 Just Ordinary Chickens? “He put your feet on a wonderful road that took you to a good place to live. So, thank God for his marvelous love, for his miracle mercy to the children he loves.” -- Psalm 107:7-9 (The Message) When Brayden heard the horn blast, he jumped out of bed, dressed quickly, and raced downstairs. Without speaking, he grabbed his grandmother’s hand, and together they went outside to see Grandpa and the new chickens. Farmer Coatsworth was really looking forward to getting the chickens to the farm because his grandson, Brayden, was visiting and Brayden loved chickens. He started to unload the chickens from the cages but his wife Carolyn stopped him. “Hold on, Howard,” she said with a smile. “There’s something very important that needs to happen first. Brayden, what do you think we should name the new chickens?” “The time has come!” one of the hens said to the little chicks with great excitement. Back at the poultry farm, the chickens had no names. But, today, the chickens would each get a name and settle into life at their new farm. This was the moment the chickens had been waiting for. It was all they talked about as they traveled to their new farm. The three-mile drive seemed like 300 miles to them. As they traveled to the farm in the back of Farmer Coatsworth’s truck, an enthusiastic young roo asked the rooster next to him what they would do on the new farm. The rooster, who wore chicken-wire-framed glasses that made him look very distinguished, answered, “Well, they’ll give us each a name, we’ll get some food, and then we’ll move into our new chicken coop.” “That’s it?” said the young roo with great disappointment. “No. The hens will lay eggs, and the roosters will strut around the yard all day long,” the rooster replied while practicing his strutting. “That’s it?” said the roo. “Yep. That’s it!” the rooster replied. To cheer up, the roo spent the entire trip wondering what his new name would be. At one point, the rooster heard the little roo muttering out loud, “I hope my name is Noah…no, Ryan! Wait, I want to be called Neal.” They passed several farms along the way and as they approached each one, the little chicks would flutter their wings and ask, “Is that our farm? Is that our farm?” The rooster didn’t know so he just answered, “Maybe.” Finally, the truck slowed and came to a crossing. One road led to the right and one to the left. The sun was just coming up, but in one direction the chickens could see an old farm in horrible shape. Farmer Coatsworth turned the truck toward the old farm, and the chickens’ hearts sank. The farmer pulled into the farmyard, got out of the truck, and walked toward the barn. From their cages, the chickens could see a huge Red-shouldered hawk in a tree near the chicken coop, and they could tell he was not happy the farmer had arrived. “Is this our farm?” asked the roo with eyes wide open. “Maybe,” the rooster replied. But in his heart, he really hoped it wasn’t. “Why would anybody want to live here?” the little roo said. They were so pleasantly surprised when the farmer came out of the barn, got in his truck, and drove back to the main road. The chickens were so relieved, and they began clucking with delight as the farmer drove across the road toward a beautiful farm. A magnificent rooster, perched on top of the barn, watched as the farmer and the chickens arrived. And it was a delightful farm! There was a large yellow house with a huge porch surrounded by beautiful flowers, and a chicken coop next to the barn. And to top it all off, the sweet fragrance of the orange blossoms from the orange groves helped the chickens forget about the old barn across the road. The farmer pulled into the farmyard, and he honked the horn, startling the chickens. And then, just as the sun began to rise over the orange groves, the chickens heard the magnificent rooster crowing from the top of the barn. “Is this our farm?” the roo asked the rooster in the chicken-wire-framed glasses. The rooster adjusted his glasses and took a long look at the beautiful farm. “Yes. I think we’re finally home,” the rooster said with relief. “So when do we get our new names?” the roo asked. “Very soon,” the rooster answered. “Very soon.”

A farm can be a big, scary place for a chicken. Just like people, chickens want to be well cared for, protected, have something to eat every day, and feel special. The Coatsworths’ Farm would be the perfect farm for a flock of chickens, if it wasn’t for that horrible hawk, a pesky fox, and the fact that all of the chickens will have the same name. Who does that to a chicken?! The red-shouldered hawk and the fox don’t care what the chickens are called. They just think of them as breakfast, lunch, and dinner. Strutting around the farm all day long sounds like a life of ease, but the chickens learn there is more to life than just sitting on the fence, watching the world go by. And once the chickens learn why they are called Doug, they are in for the adventure of their lives. They are on this farm for a reason, they are special, and there are chickens who need them. It all starts with a loving farmer and his grandson, a rooster like no other, and some neighbors in need.

Kimberley Osness loved growing up as a preacher’s kid. She resides in California and is currently a creative production manager for Disney Parks. Her favorite roles, though, are being a daughter, sister, friend, and Aunt Kim to 22 nephews and nieces. Her love of God and family is the foundation behind her story of redemption, faith, and bravery. God made my life complete when I placed all the pieces before him. When I got my act together, he gave me a fresh start…God rewrote the text of my life when I opened the book of my heart to his eyes. - Psalm 18:20, 24