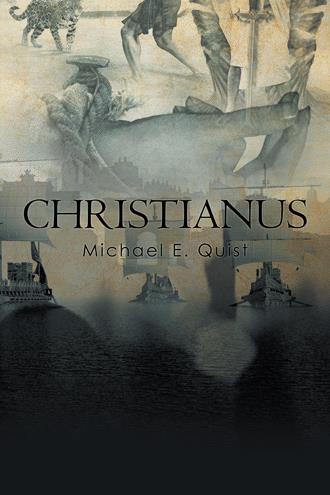 Whimpering, the fallen noble continued, “now that I know that you are God, allow me this one chance to redeem my life and mitigate the consequences of my actions. Please, Mighty One. Please.” Pressing her face against the stone floor, the empress waited, trembling. She wondered what it would feel like to be struck by Heaven’s sword. She remembered in horrible, poignant detail the descriptions that had reached Rome of the death of the Judean ruler, Herod, called the Great. He, too, had supposedly been struck down by God, after being called a god himself by a sycophantic crowd. Shuddering, Agrippina thought of Rome’s chief doctor, Lucius Feren, and his report regarding the Judean ruler. The doctor had investigated the death personally, and all of Rome was aghast. Herod’s flesh had rotted, maggots eating him from within his own belly, every aspect of his manhood reduced to filth, corruption and horror. Doctor Feren had been pale as he had described what he had seen. The Judean had lasted for three weeks, his body putrefying, wracked with the worst agony the doctor had ever witnessed. Drugs were useless for relieving the tortured man’s suffering, and in the end the once-powerful ruler was begging for death, his rich bedsheets drenched with the filth of his decay, foul-smelling liquid seeping from his lips. No one could even bear to enter his room. Shaken to her core, Agrippina continued to wait. Would it be quick? The thought of her graceful, beautiful body rotting away like Herod’s was unbearable. Surely, she would be far better off if she were to drive a dagger into her breast or throat and end it all in an instant. Agrippina began to consider it. Should she do it now, quickly, before the angel struck her? Wouldn’t it be better to die mercifully at her own hand than to be torn apart by this bloodless thing filled with the wrath of God? Who could say what tortures it had in mind for her? Tortures. Agrippina suddenly saw herself, sitting at the feet of the bound Christian woman in the hold of the galley. She saw herself draw the dagger across the woman’s defenseless skin, and she suddenly understood with horrible clarity the enormous value that the Creator placed on each of those drops of blood that she, empress of Rome, had so casually shed. Every crimson orb from that girl’s veins held infinitely more value to the Almighty than everything that she, mother of Caesar, had ever owned, done, or been. In an instant, the tall noblewoman realized that she did not matter in the eyes of God. She was now merely an object of wrath, despised, executed, tormented forever, and forgotten by everyone that did matter. The images continued in their unrelenting horror. It was she, not her soldiers, raping the helpless Christian, brutally ravaging every last aspect of the woman’s dignity and innocence. It was the empress who was beating the woman’s body, slashing the skin from her back with the whip, stomping her legs, destroying her flesh. She was pounding the nails through the woman’s wrists and ankles. She was the hyenas, tearing at the helpless legs, feeding on flesh that was immeasurably precious to the Creator of the Universe. The empress’s crimes revolted against her in horrible succession, until Agrippina collapsed, weeping, her face in the dirt of the floor. Still, it was not over. Jerusalem. Agrippina suddenly saw the young rabbi, beaten by her soldiers, and she realized that her hands were covered with the man’s blood. But he was not just a man. In a stunning instant, the empress suddenly knew that this man was also God. This man was the Creator in human form, an incarnation sent to earth for the purpose of saving all of mankind, and the empress was personally and brutally nailing him to a cross outside Jerusalem! It had to end. Desperately clutching her dagger, the empress of Rome raised the edge to her throat. One quick slash, and it would be over. But would it? Agrippina could now see the far side of death. Demons with jagged claws and teeth were waiting for her. They were hungry, and she was the food. The vicious hyenas attacking Sarah’s body in the arena looked tame and harmless compared to this group of ravenous creatures, who clamored for and impatiently awaited her arrival. Agrippina now realized that her death would be merely the doorway into a prison more horrible than any she had ever imagined. A vast lake of burning lava and sulfur was waiting to cover her skin and torture her flesh in an endless ritual of unendurable agony, attended willingly by cruel, insatiable demons, who would tear and eat at her forever. “Oh, please, God. Only you can save me from this. My punishment is more than I can bear.” The empress sobbed, overwhelmed with fear and horror. “Please, save me. If your Son truly came to grant your mercy to the people of the earth, is there a drop perhaps available to me, a crumb of chance for me, falling unheeded from the favored children’s table? Your beloved daughter Sarah forgave me; can you also forgive me?” Tears streamed down the elegant cheeks as the empress continued her plea. “Please tell me that there is some hope. I can change—I will change. I accept the redemption you offered your people, if you now offer it to me, and I accept that you—and you alone—are Lord of the Universe. I will never worship another. Is your Son’s blood sacrifice strong enough to save me, the most evil and horrible of all the Roman people?” Words failed, and the woman fell to her face in the dirt, weeping.

Christianus tells the story of how Christians can change their world through obedience to the leading of the Holy Spirit. Set in first-century Rome, the display of phenomenal Christians (including a “guest appearance” by the Apostle Paul), provides believers today with a practical view of how Christian patience and submission in a hostile world can cause world-changing responses in the people who are privileged to witness sacrificial obedience to Christ in action.

A doctor of philosophy in education with a passion for the truth, Dr. Quist has been writing Scripture-based philosophy and stories throughout his careers as military man, businessman, teacher, and pastor. Inspired to write Christianus from such works as The Robe, The Silver Chalice, Ben Hur, and other fantastic works of ancient Christian life, he has written Christianus to display how Christian obedience can change the look of a dangerous secular world.