A Biography of Isaiah Thornton Montgomery 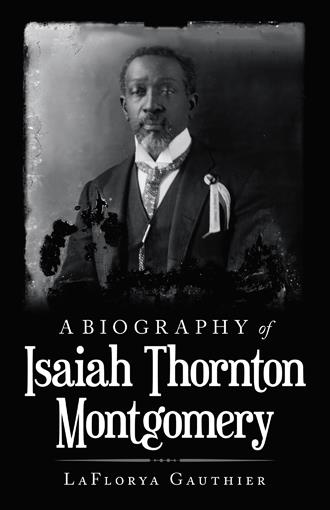 This book is the story of a man who was most unusual for his time. He was better educated than many prominent whites in Mississippi at the time, and because of that education, learned first with his family, later in the huge international Davis library, he had a profound and extremely advanced understanding of his environment and time. His father always had the idea of establishing a place where blacks could have control of thei9r own lives. With his two sons, Isaiah and Thornton, they temporarily realized it. However, with the failure of that attempt, the idea did not die, although it had to be put aside temporarily. This is the story of a slave family like no other in all the annals of slavery in the United States of America. The Montgomerys were freed by taking refuge in Ohio during the Civil War. Afterwards, they returned to the place of their bondage, legally freed by the Thirteenth Amendment. They bought and operated the plantations where they had been slaves, plus an adjacent plantation, and won numerous prizes for their cotton. Benjamin Montgomery, Isaiah's father, was the persistent planner behind all of this. He, too, was better educated than most of his contemporary white acquaintances. He had his own library and total access to the Davis extensive library. He designed and built devices of all kinds, owned companies, and constantly out maneuvered white businessmen and bureaucrats. His success provided comfort and security for the community. Not only did his son, Isaiah, duplicate his father's ultimate plan of a homeland for blacks and founded Mound Bayou, Mississippi! They were quintessential examples of self-made men! It has been said that Isaiah's historical significance derives from his role as an African American accommodationist and entrepreneur. though his 1890 address and his activities on behalf of Mound Bayou, he displayed a consistent belief that educational and economic advancement, not political activity, offered the best means for African Americans to improve their plight. He carefully monitored his own actions and those of his fellow Mound Bayou citizens to ensure the continual support of their white community. Today Mound Bayou stands at the edge of a new era. As glorious as its past has been, Mound Bayou seems to have to break with some of its cherished traditions if it expects to survive in the midst of changing economic patterns. Mound Bayou prepare your future for future generations and envision all tomorrows with the determination and desire that will keep alive the standards of excellence set by Isaiah Thornton Montgomery.

In all the annals of slavery in the United States of America, there is no other story like that of the Montgomerys, they were freed by taking refuge in Ohio during the Civil War. Then they returned to the place of their bondage, legally freed by the Thirteenth Amendment. They bought and operated the plantations of their bondage, plus an adjacent plantation, and won numerous prizes for their cotton. And although this experiment failed, the idea of a permanent home for blacks did not. For Isaiah carried out his father’s lifelong plan of a permanent homeland for blacks and founded Mound Bayou, Mississippi in 1887.

The author has been a newspaper and magazine journalist, and a radio producer/announcer. As a radio producer she hosted and produced a program at Radio Canada International, Montreal, for the African market in English and French. As well, she did extensive free-lance work in both official languages. She was the producer and announcer for a weekly program in French at Radio Nord Joli, as well as a board member in St. Gabriel de Brandon, Quebec for seven years. She is a published author: “Whispers in the Sand”, published by Genesis Press, in three editions and translated into Swahili and also published by Ballantine Books; “Charlotte’s Tree” and “The Romance Writer’s Handbook” published by IUniverse, plus numerous other books with a publisher that has ceased publishing. (Therefore, all rights to books published with them have reverted to her). She was in charge of the English Language Service at Radio Senegal in Dakar for ten years and was educated at universities in the United States and Montreal. She was the founding president of the first romance writers association in Montreal: Writers Association for Romance and Mainstream (WARM). She is a member of and literary judge for Quebec Writer’s Federation, Montreal. Her Internet media connections are: eBay, Linkedin, Twitter, Instagram, Google (also one of her Internet search engines), Pinterest, Yahoo and Amazon. Her new Website is under construction.