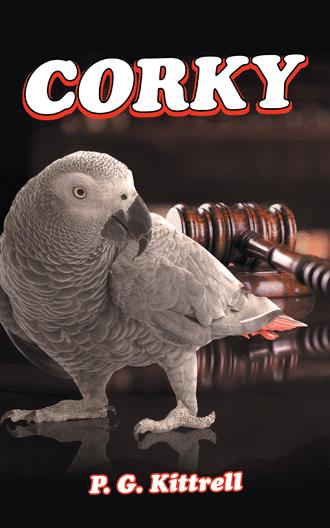 “All rise,” ordered the bailiff. Judge Alexander entered and got situated. “Let’s get started. Mr. Carrington, call your next witness.” “Thank you,” said Mr. Carrington. “The people would like to call Corky.” “Objection!” shouted Mr. Gilstrap. “It’s pointless when we’ve already heard counsel won’t be able to ask the bird question.” I raised my hand as if I was still in school. Judge Alexander pointed to me and asked, “Ms. Sikes, is there any way this can be done?” I stood up and replied, “In all fairness to Mr. Brewster, Mr. Gilstrap has a very valid point – Corky will only respond to me. As a suggestion for you to consider – if the attorneys would write down their questions, I will ask Corky.” “With such an unusual witness,” said the judge, “unusual methods are called for. I will allow this line of questioning.” I took the cat carrier to the witness stand. The ledge was wide enough to set the carrier on. I opened the door and motioned Corky to come out. He stuck his head out and cautiously stepped out. I looked at the judge and said, “I’m going to first ask him a ‘yes’ and a ‘no’ question so you can see how he answers.” “Very well,” she replied. “Proceed.” “Corky,” I started, “I’m going to ask you a lot of questions so don’t get upset. Okay?” No response “Is your name Corky?” “Clean house.” I looked up at the judge again. “Give us just a minute, please.” I grabbed the mixed nuts can and took the plastic lid off and said to Corky, “Turn around.” He did and I said, “Fire away.” When he was done I put the lid back on, held it up to the judge and said, “Parrot Porta-potty.” “Let’s try this again. Is your name Corky?” Yes-bounce. I looked up at the judge and said, “He bounces up and down meaning ‘yes’.” Mr. Carrington, seated, said, “Let the record reflect a yes response to the question.” “Corky, is my name Linda?” I continued. No sway. “He sways from side to side to indicate ‘no’.” Mr. Carrington said, “Let the record show he answered ‘no’” “Corky, do you know what a kangaroo is?” He laid his head over to the side. “That would be his ‘I don’t know’ answer.” Right on cue, Mr. Carrington said, “Let the record show an ‘I don’t know’ response.” “I think we are ready to go,” I said, looking once again at the judge. “Obviously, the questions have to be a yes/no type of question. “What would you like me to ask first?” Mr. Carrington wrote on his legal pad. My first thought was that he could have been a doctor with his handwriting, but I managed to get the jest of the question. “Corky, that day in the woods, you saw a man with another man. Is that man here now?” Yes-bounce.

Teri has established a very unique friendship with her pet, an African Gray Parrot, by the name of Corky. On one of his flight times outside the home, he witnessed a murder. He helps law enforcement by testifying in court. This news worthy event attracts the FBI who solicit his help for a case they are working on in conjunction with the CIA. This case takes Corky back to Kenya where he is from. Now he has the chance to stay where he was born.

Ms. Kittrell has a love for animals and enjoys good courtroom drama. Her writing takes the reader through pertinent issues with a little humor along the way.