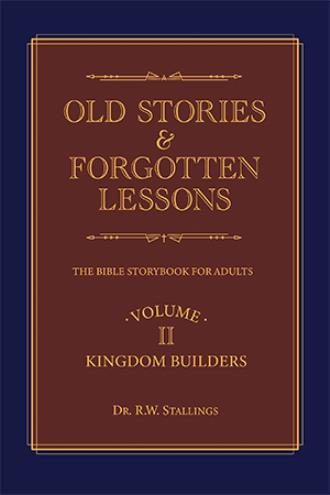 The message the world hears from the church in America is confusing. Many of us have drifted so far from biblical teaching that those seeking our help cannot find it in the church. The picture of God we present is so removed from biblical truth that even our own children are without froundation and are leaving in great numbers. I do not accept the premise that the non–churched world has rejected God; many have never heard the compelling unfiltered Gospel truth preached with love. When we discard the biblical text and do not teach it to our people we give away the power to help those really needing the church. The church must make her own peace with God before the world can hear the voice of God from the church. Old Stories & Forgotten Lessons, Volume two is a Bible storybook written for adults. Volume two contains the stories of Moses, Joshua, the Judges and the Book of Ruth. The stories are set in time and place with secular history and each is self–contained with lessons gleaned from the stories to help us live our lives in a world which often denies that God exist. These stories should give us courage to face a society which often has angry words for those of us who believe in God. Our children are facing a hostle world which is not their friend; they will often feel isolate because of their belief. They need to know how the heros of our faith lived and led successful lives.

Dr. R. W. Stallings is a biblical historian with sixty years of teaching the stories of the Bible. His love for the Bible stories began at an early age in vacation Bible school and became his lifelong study. He received his Master of Divinity (MDiv) from Hamma School of Theology at Wittenberg University in 1978 and in 1982 received his Doctor of Ministry (DMIN) from United Theological Seminary. During his ministry he served as pastor, evangelist, college administrator, seminary lecturer, church development facilitator and was the regular speaker for a daily program on Christian radio in Dallas Texas. The Reverend Dr. Stallings is also the author of Old Stories & Forgotten Lessons, Volume one.