Memoir of a Vietnam Veteran 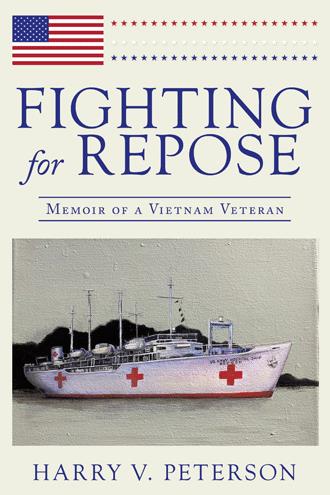 Harry Peterson has written a gripping, suspenseful, intense true-story account of the author's service in Vietnam onboard the Navy hospital ship USS Repose (AH-16). He was an electrician working in the bowels of the 450-feet ship. Traversing back and forth Da Nang's coast along the DMZ (Demilitarized Zone), USS Repose (AH-16) and its staff admitted and cared for American servicemen by the hundreds, the wounded, the dying, and the dead in body bags. Harry was nineteen. Plagued by dyslexia all his childhood and adulthood, Harry navigated his challenging journey through life with patience, persistence, and his unshakable faith in God. He rose from being third from the bottom of his high school class of 650 to electrician on USS Repose (AH-16) to Commissioned Naval Officer and retired as a full lieutenant to Chief Administrator in reputable hospitals. He achieved success in his post-navy endeavors by going to college despite grave challenges: being shunned and spit on, including the murder of his ex-wife. Labeled as dumb in grades 1 through 12, it was not until very late in life that he was diagnosed as a dyslexic. It is almost impossible for him to read anything and understand what he has read. Early on he realized that if he were going to accomplish anything in life, he would have to find a way to succeed. He came up with the philosophy of “I can do it through patience and persistence”. He made it a habit to always practice his philosophy every time he wanted to learn something new. Whenever he conquered something, it would take him longer than normal to learn it, but he would stick with it until he succeeded. He never gave up. He applied the same philosophy in writing Fighting for Repose. His patience and persistence paid off. He earned a degree in Industrial Engineering with minors in math and physics, a private pilot’s license, a masters in scuba diving, Associate degree in Architecture, stationary engineer’s license, commercial & residential contractor licenses, and a commission as officer in the United States Navy. Harry reached the pinnacle of his career, owned his construction company, enjoyed financial security and family bliss with his wife, and two daughters. Just when he thought life could not get any better, he was diagnosed with Post Traumatic Stress Disorder caused by his Vietnam tour of duty. His thirty-six years of marriage disintegrated into a divorce. Left with only the shirt on his back, he would have descended into homelessness if it were not for a loving sister and brother-in-law who threw him a raft. Fighting for Repose is a metaphor for Harry’s lifelong battle with dyslexia, PTSD, and, ultimately, fighting for his life.

Fighting for Repose is a gripping, suspenseful, intense true-story account of Harry Peterson’s service in Vietnam onboard the Navy hospital ship, USS Repose (AH-16). As a nineteen-year-old electrician working in the bowels of the 450-feet ship, he traversed Da Nang’s coast along the demilitarized zone, with his ship admitting and caring for critically wounded American servicemen by the hundreds. In his foreword, Alvin J. Hower, author of No Greater Service: A Peace Corps Photo Memoir, writes, “Harry Peterson’s story reminds me of Forrest Gump! At an early age, Harry, like Forrest, is deemed a slow learner (but with a bad knee not leg), was bullied, had a love interest that was possibly involved in drugs in one way or another, and Harry was sent to Vietnam. But, like Forrest, Harry is an endearing character that always did the right thing.” Full of life lessons on survival and laced with insights on enduring war, PTSD, and dyslexia (that was not diagnosed until he was in his 60s), this memoir will inspire you to always do your best to persevere and follow your moral compass.

Harry V. Peterson was third in his high school class of approximately 600 students, (third from the bottom that is), but through grit, patience, and persistence rose to become a petty officer third-class electrician mate, earned a BS degree in Engineering, commissioned Naval officer, and resigned his commission as full lieutenant in 1979. He reached the pinnacle of his careers as chief engineer, associate hospital administrator, and owner of the New River Construction. A licensed private pilot and open water master diver, Harry retired in 2010, and lives with his wife Lari in Florida. This is his first book.