Adventures of the High King

Where the Trees Glow 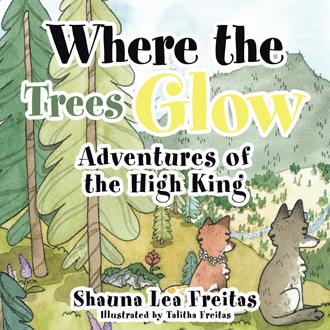 Where The Trees Glow Daisy chewed on her breakfast roll while staring at the dark trail in front of her. This would surely be the most exciting birthday she’d ever had. Today was her 10th and for her gift, nanna Lacey had told her of a quest. She pawed through the knapsack her parents filled for her journey and thought about her morning. Nanna Lacey said she needed to follow the dark trail through the forest all the way until she got to where the trees glowed. If she made it, she would see the High King and be able to ask for a blessing. All her life she’d been bullied by the other animals. How she longed for a friend, a true friend! The High King could make that happen. The dark trail was named well and most animals, Daisy included, went around it. Today had to be different. Daisy let the pine and dirt smell fill her nose. Daisy put on her knapsack and exhaled. She picked up a paw and then paused at the rustling of grass. “And what do you think you’re doing?” Sneered Barry, a cub from school. “I’m going to find the High King.” Daisy whispered shakily, all courage fleeing. “My Uncle tried that and never found Him, plus he almost didn’t make it back. It’s a useless fairy tale.” Barry snorted and walked off. The foreboding trail mocked her silently. She felt like failure was certain. But without that blessing, Daisy would always be laughed at. NO, it was worth the risk. She adjusted her pack and started walking. The farther down the trail Daisy went the more nervous she became. She hadn’t heard a bird or even seen a dragonfly for hours. She looked up at the dense pine branches above her and felt trapped beneath them. It was eerie having the only sound be her small paws on the dirt path. Daisy distracted herself from the scary forest by daydreaming about what it would feel like to have everyone in the meadow be her friend, wave to her and share picnic lunches. Daisy was still in her daydream when a fur-raising sound came from close by. A sloppy gloppy growly growl! Daisy froze. Was that a monster? She was just a little fox…maybe she should run. But what if it wasn’t a monster at all? Sloppy, gloppy, growly growl! Daisy took a deep breath for courage, crept behind some thick shrubs and peered through the branches. Squelch. Whimper. A shape struggled in a bog, up to it’s furry chin in mud. Daisy moved the branches to see better, and gasped! A small coyote needed help fast! “Don’t move, I’m coming!” The coyote looked up in surprise as Daisy fought her way to the edge of the bog. “Careful!” The coyote squeaked. The coyote was sinking and Daisy needed a plan!

Daisy is a fox who is on a quest to find the High King so she can receive a blessing and finally get friends. Others have said he doesn't even exist but Daisy is going to give it all she's got. Along the way she meets another creature on the same quest. Things are looking pretty good until Daisy is faced with making the hardest decision ever.

Shauna Lea grew up in the wilds of Idaho where she sometimes saw more animals than people. She read stories until she ran out of books and then imagined up her own stories until she could get to town and find more adventures encased in paper. She now lives in Montana with her wonderful husband, amazing daughter, who is also her illustrator, and two precocious pups.