FROM A COLT’S PERSPECTIVE

by Sonia A. Pickering 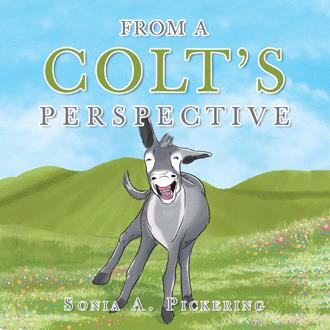 As we drew closer, Jesus stepped away from the crowd and came towards us. The men handed me over to Jesus. He thanked them for completing their assignment, and told them to go refresh themselves. Then Jesus looked at me with such love and tenderness, and my little donkey’s heart melted. Immediately I fell in love with Jesus. Instantly I felt warmth travelling from my head down my long, brown neck, all the way down to my hairy, wobbly legs. I immediately felt strength flowing through my entire body. My legs felt sturdy beneath my body. My back felt like I could carry the world on it. A newness of life and energy was coursing through my body. I found a reason to live! The crowd that was standing around, started spreading their clothes on my back. Then Jesus climbed onto my back. He spoke to me in such reassuring tones, leaning forward, as He caressed my face and neck with His gentle hands, telling me that everything was going to be okay. That visible, physical affection from Him made my day. I felt special! I was firm on my feet. Jesus did not feel like a burden. He was as light as a feather. Not to mention His gentleness with me. I was experiencing His tender, loving care. I mattered to Him. At that moment, I loved Him even more. Persons were placing their clothes on the road, and some were cutting down leafy branches from the trees and also spreading them on the road. It was a large crowd in the city that day. It appeared as if the entire city came out to witness this grand entrance Jesus was making. Persons were running before me and still many others followed behind. The people started shouting “Hosanna! Blessed is He who comes in the name of the Lord”. Oh it was such a joyous occasion! The crowd was celebrating Jesus’ entry into Jerusalem, and guess who was in this great parade…….this gala event……this grand entry……me….Kholt! My head was held high, my steps were steady, sure and precise, as I so proudly and humbly carried the King of kings and the Lord of lords on my back. I was full of courage and felt very brave. Not an ounce of fear was in me as I carried my Lord atop my back. I immediately knew that it was for this very purpose that I was born. To be the colt that was chosen to transport the Savior of the world through the streets of Jerusalem, with the crowd exalting Him. If I did not do anything else in my life, I was fulfilled carrying out this significant task, on this particular day. I trotted elatedly and triumphantly down the branch and coat covered street, and up the hill to the temple, where I deposited my precious cargo. Jesus skillfully alighted from my back and went into the temple. Sorry that my services were ended so quickly, I was taken to the stable where I was fed and given water to drink. That night, I could not go to sleep that quickly, because the events of the day kept playing over in my head. My purpose might have lasted but a few minutes, but I accomplished what I was called to do, and I did it with all my heart. Over the next few days I started hearing of things about Jesus, and why He was in Jerusalem. I knew He was facing a trial and much suffering. I sneaked out of the barn where I was being kept, to witness what was happening that fateful and memorable Good Friday. I saw Him struggling to carry the cross up the hill to Calvary. I wanted to help Him so badly, that I tried forcing my way through the thick crowd, but I was pushed away, I could not get through. Oh that I could have been able to carry the cross for Jesus and help Him bear His burden! What was wrong with these people? Could not someone help Him? Then in answer to my silent question, I saw a man who was asked by the soldiers to do so, helping Him to carry His cross. I could not bear the sight of the cross and the injustice that was being done to Jesus. Seeing the tragic event of Jesus’ crucifixion was really disturbing and overwhelming. I turned my head away until everything was finished, because I loved Him so much, and could not stand to watch what was taking place. I was sad because I wanted to say goodbye, but did not get the chance to. When everything was over, and the crowd dispersed, I gathered the courage and went up to Jesus, hanging there on the cross. My entire life flashed before my eyes, as I stood there at the foot of the cross. My birth, my life growing up, farmer Joe and his family, mom and dad. The hurts, the disappointments, the failures, every negative aspect of my short life, all was played back to me like a reel from a movie. Now I finally saw how it all made sense, at that moment. I was beautifully and wonderfully made. I was not a mistake. Meeting Jesus, and given the opportunity to serve Him, to be used by Him, even for a short time, was worth it all! As I looked at Him, I knew it was love holding Him on that cross. I also realized at that moment that He not only died to redeem mankind, but He died to redeem all of creation, trees and animals, and that included me…..Kholt!

As Jesus Christ spreads His inspirational message across the world, Kholt is born on a farm outside Jerusalem, Israel. The young donkey is considered worthless by his owner, Joe, because he is too small and weak to do much work on the farm. Even worse, the farm animals do not like him either, and Kholt has caught them snickering behind his back. When Kholt overhears Joe telling his children that he cannot afford to feed an unproductive animal and must kill him, he starts crying. But when one of the children suggests that Joe tie Kholt to a tree on the road to town and allow someone to take it, Joe finally agrees to the plan. As Kholt bravely decides to embrace this new chapter in his life, he sets off down the road with his head held high without any idea that he is about to discover that the Lord needs a donkey just like him.

Sonia A. Pickering is an ordained pastor who seeks to show the love of Jesus to children of all ages. She currently serves as an Associate Pastor with the Cambridge Community Outreach Tabernacle in Cambridge, Massachusetts, and carries out duties as the Oversight Pastor for the women’s ministry. Sonia and her husband, Everett, have one daughter.