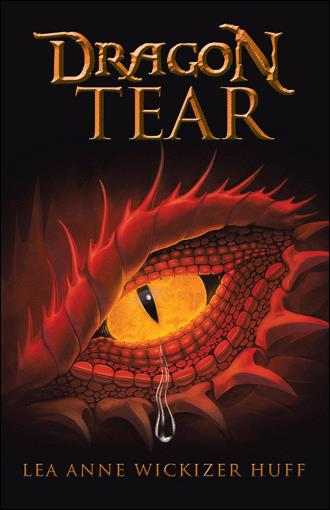 They rode on through the day until the forest began to lose its light. It was time to stop for the night and make camp. They got down from their horses and pulled the gear from behind the saddles. Jack began taking Muffin’s saddle off when Elmer climbed on top of his backpack. “Do you have any pretty, shiny goodies in here to give to Elmer?” he asked. “Elmer wants to see in Jack’s bag. Please, please open and let me look inside. Maybe you… what is that around your neck, Jack?” Elmer climbed up Jack’s leg and clutched on the front of his shirt. He looked at the dragon tear hanging from the silver chain around Jack’s neck. “What pretty, pretty, shiny trinket is this what Jack wants to give to Elmer? Oh, my! Elmer has not seen such a beautiful bauble since, well… since I left Ian a moment ago. Tell, Elmer asks. Tell what this is?” Elmer pointed out his finger and touched the dragon tear on Jack’s chest. Neither Elmer nor Jack expected what happened next. A bolt of red light flashed out of the stone onto Elmer’s finger. For a moment, Elmer was illuminated in a red glow and hung helplessly in mid-air in front of Jack. A second later, the red flash retreated and Elmer fell, still and silent on the ground. Ian ran over to them and both boys knelt down next to Elmer. “Is he ok?” asked Ian. “I don’t know if he’s alive.” Before Jack could answer Elmer began to stir, lifting his hand up to his face. “My, my, my. Elmer not feel so good now. Jack has powerful magic that Elmer does not want anymore. Elmer will be ok but will not go near Jack’s shiny again.” “You scared me, Elmer.” said Ian. “Are you sure you are ok?” “Yes. Elmer ok” he replied. The boys finished unpacking their horses and carried their gear and packs over to the side of the trail just to make camp. They began picking up logs and branches that had fallen from the trees to make a campfire. The boys worked quickly, making a pile of deadwood and gathering another pile of larger branches and logs to use later in the evening. After they set their blankets and packs by the pile of wood, Jack opened his pack and removed the flint and his knife to start the fire. He struck the flint, sending sparks onto the logs and raised the knife to strike again. He stopped when he was distracted by a screech from Elmer. “What are you doing? You are not doing that! Stop! We don’t have funeral pyres in the forest! Stop and don’t burn my brothers and sisters and oh, the gods will be angry…!” Again, it was Ian who rushed over to Elmer, trying to calm him. “These are just dead branches, Elmer. They aren’t dead wood elves. We are just building a campfire, not having a funeral. Calm down.”

Eleven-year-old Jack Carter begins sixth grade at a new school. He’s more intelligent than other kids his age, but his grades are far from perfect. Jack suffers from headaches and strange dreams, but he keeps these things secret, even from his mom. In the dreams, someone calls to him, but Jack doesn’t know who or why. An extra severe headache lands Jack in the hospital, which is when his life flips upside-down. He wakes wearing a strange necklace and receives a warning that he must escape the hospital immediately. The reality Jack knew has disappeared, replaced with a strange world of magic and dragons. With no time to adjust, Jack is tasked with restoring the four towers that balance the universe. Using his intelligence and strength, Jack faces incredible obstacles he never could have imagined. Along the way, he discovers who he is and his true purpose, all while saving his home from certain destruction.

Lea Anne Wickizer Huff is a lifelong resident of New Carlisle, Indiana. She began writing stories at a young age and has continued throughout her life. Lea Anne attended Indiana University, South Bend, and is an Army veteran. Lea Anne has four children’s stories out in publication; “Growing”, “Uncle Byron”, “The Fearful Knight”, and “The Mischievous Child”.