In the Eye of the Centaur 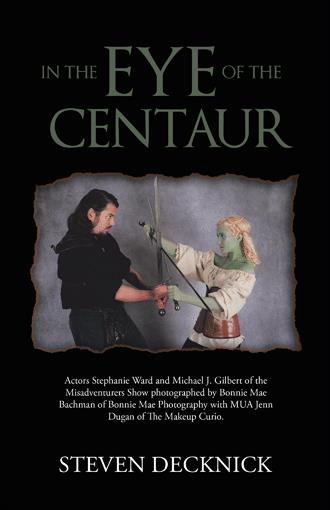 I have got to get out of here! I looped the cord around my hand, then grabbed each sword by the hilt. I didn’t get a chance to take my first step toward the door when the swords began to glow and pulsed with power. The hilts throbbed and warmed in my hands even as the swords suddenly felt lighter. Then the Captain's door chime rang. "Cap'n?" Mister Gruff called from the other side of the door. My escape plan suddenly became worthless. I had to get out. But how? Improvising again, I put the tip of one blade into the gap at the edge of the statue's back end, using the sword as a lever. The statue glided aside easily, as if it were on wheels. The passage opened just enough for me to slip into the darkness behind the statue. By a stroke of good fortune, I hadn't chosen the side with the hinge. Behind the centaur, I pulled the wall switch I found with two fingers, as I was still holding a sword. The centaur statue slid back into place and closed the doorway with a quiet click. I could only hope that Captain Moore didn’t witness my escape and he couldn’t follow. I leaned against the wall of the corridor, panting through the panic. I was breathing excitedly, but as quietly as I could. I heard Mister Gruff and the Captain leave his quarters, and then nothing. Finally certain that I was not being pursued, I stealthily padded my way deeper into the maintenance passage. I would miss Leroy, but my loss of not seeing him further was counterweighted by a powerful desire to get back to my family. The two swords and the pearl artifact were a challenge to carry in the tight space of the passageway. The swords continued to glow in my hands, so I was thankful no one was here to see them. Their brightness helped me to see my path. The blades throbbed in my hands as I came near a low pipe, as if warning me to duck. They were oddly lightweight and maneuverable. My slightest gesture easily moved the blades into position ahead of my steps. They practically floated now, but had been so heavy when I first lifted them off from the statue. I paused to change my hold on the artifacts, as I was worried about dropping the centaur's eyeball as the cord was drooping and slipping from my hand. I set down the swords point first to stand them against the side of the passage. The sword tips hissed as they contacted the floor, sinking into the solid metal. The glow of the swords faded and the hissing died away. I raised the loop of black cord up and over my head, resting the eyeball artifact around my neck. I reached for the swords, one and then the other. Each blade was arm-wrenchingly heavy, until I held both. Then they glowed, and it was as if they lifted into the air under their own power. This was Leroy's plan and it was working. Would I be able to thank him when I reached the surface? Maybe there was still time to convince him to come with me. I stopped and stood there alone in the passageway. Strangely, shouts echoed through the inner walls of the ship. Must be that Captain Moore sent out warriors looking for me. I hurriedly resumed my steps toward the escape pods. The next thing I remember, I was there. Could I do this? Could I leave by myself? I resolved that I had to—and in a hurry. I couldn’t be sure, but the muffled noises that I could hear through the walls sounded like the fire of weapons. I set the swords inside the pod very gently, one at a time. There was only a slight hiss but no damage as the points rested on the floor of the pod. It was as if the swords knew that I didn’t want to damage the pod. Their glow faded slowly after I released each from my grasp. As if triggered by my movement, an alarm abruptly rang out—I had never heard an alarm on the ship before. A blaring horn blasted three times. Did I trip an alarm? My mind must have been playing tricks on me here alone in the darkness, as I thought I heard footsteps in the maintenance passageway. The rapid thumping noise was probably the pounding of my own heart. The horn blasts were followed by a message in a mechanical voice. "Warning! We are being boarded!" it said.

In the Eye of the Centaur is a Science Fiction tale with Fantasy creatures, featuring Terrah the Dryad from the Orion's Belt constellation. It seems Terrah can't do anything right as she struggles to make friends and strains to win a videogame contest, when she is abducted by space-faring pirates. She escapes to Earth where she is attacked by Captain Moore and chased into the clutches of an ice-breathing dragon. Through her journey, Terrah discovers friendship, self-confidence and self-acceptance from Matthew 22:39.

A lifelong learner and reader of fantasy and science fiction, Steven Decknick is a Christian medical professional with a love of stories. The author studied the cultures of China, Latin America, Russia and The Middle East and enjoys including foreignness, medicine and Christianity in his writing. He has been married to the love of his life for over 30 years and they have raised six wonderful children in upstate New York. This is his first novel.