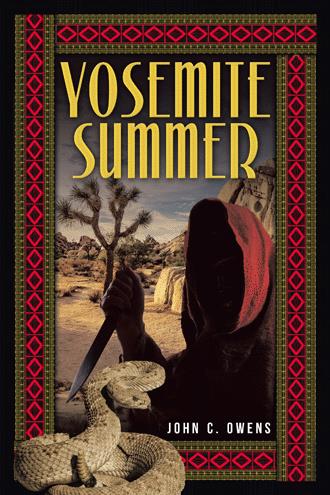 Searchin’ Sam headed back to his cabin and put on a pair of jeans and a T-shirt. It was getting chilly, so he went to grab a jacket, but stopped and grabbed his damp, smoky priestly robe instead. Smells like smoke. A little damp. Maybe that’s a good thing -- it’ll add a bit of gravitas. He laughed to himself. Sam grabbed his the stick he had used as a staff in the play, threw the gown around his shoulders like a cape and headed off to find the lovebirds. As he topped a nearby hill, an old man approached, walking his dog. “Good evening, sir. Have you seen a boy and girl out walking this way?” “No.” The old man smiled and stared at the costume. Sam turned theatrically to him, warning him of dangers in the night in a theatrically somber tone. Sam then proceeded to the camp lake, which was really a good-sized pond. A cordoned off section served as the camp’s swimming area. It was formed from an impoundment of a large feeder creek to the Merced river and replete with small coves and reedy expanses. Finding no one, Sam turned and headed away into the fields along a path bordering the creek. The sky was darkening quickly now, but Sam knew this area well; besides he had a strong flashlight. As he walked on, he occasionally called out “Toni,” but didn’t receive an answer. A dog barked then yelped a few times in the distance. Then silence again. Sam walked along the path near the edge of the old woods, swinging his light this way and that, occasionally looking into the trees. He knew the path ahead bordered a drop off of about six to eight feet on his left, so he took extra care hugging the opposite edge of the trail. Through the night silence Sam stopped to listen several times as he thought he heard what sounded like the murmuring of voices emanating from the woods. He headed off the path through the waist-high weeds toward the noise and a stand of old trees. Lights shimmered in the distance through the trunks and Sam beelined toward it. He turned off his light, bent over and crept closer. They might be poachers. As he approached, torches flickered, and Sam strained to make out the words of a low-pitched chant. Sounds like a foreign language. Kind of like a Gregorian chant, but coarser. A flash of light came from a clearing ahead. He stopped and stared. What in the world is going on? The old man he’d met on the ridge suddenly stood up from the weeds beyond the clearing. The man shouted something incomprehensible and just as suddenly he fell back down. Sam watched, transfixed with horror as hooded figures walked slowly around a tall pale man wearing a cloak and standing beside the large pile of rocks. He held a long black knife high above his head. On this makeshift altar was a young woman about his sister Dani’s age. That’s Toni. Horrorstruck, he opened his mouth to call out a warning to the girl, but a hand clapped it shut from behind. He struggled to move, but a pair of strong arms held him fast. A voice whispered in his ear, “Quiet now. It’s too late for the girl. Their guardian knows you’re here and he’s coming for you. Don’t move. Stay silent.” The arms let him go slowly and the man came around to face him. “Sam, go back the way you came, right now. I can hold the beast at bay while you retreat. Quickly. Go now.” “What? Who are you?” Sam blurted. There was a rustling in the brush, a loud rattling and then a hissing noise. “Not now. Go!” the man whispered urgently. “And don’t speak. Run!” Sam tore back through the weeds toward the path. Behind him the noise increased, followed by more loud rattling. A loud female scream echoed through the night air and Sam felt every hair on his arms stand up. A loud scuffling noise came from where he had just been. Like a modern-day Lot, Sam didn’t stop to turn and look. A rattlesnake? Man, that must be a BIG one! A series of muffled thumps erupted from behind and all noise stopped. As he neared the trail, he remembered the drop off ahead and fumbled to turn on his flashlight. He shook it and flicked at the switch while he ran. A blue flash lit the area, causing him to turn as he ran. He was suddenly aware that he was sailing through the air. Pain lanced through his leg as it gave way under him. He hit the ground rolling awkwardly. Everything went black as his head hit a rock.

Yosemite Summer details the spiritual challenge to a group of young men who unexpectedly encounter supernatural evil in series of powerful events dealing with a missing girl. Former detective Lou Decker and his sidekick, Hank Cloud travel to California to assist in the investigation with spectacular results.

John C. Owens MD practiced emergency medicine for 35 years in both the Detroit urban area and in the hinterlands along Lake Michigan. He served as Van Buren County assistant medical examiner for a decade encountering death and homicide in many forms.