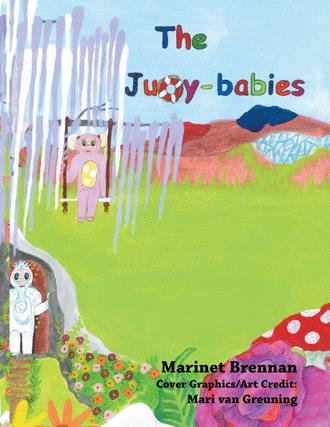 Together the foursome head towards the horizon. Guided by a far-off column of fire, they head with trepidation towards the dreaded Plaga Valley. They walk and they walk, through thick sand and onto rough gravelly land. They walk and walk, through dense dried-out groundcover and darting past tumbling tumbleweeds. They walk and walk until they start to smell something which make them stop in their tracks. It is a very strong, pungent odour that smells like metal, like iron. They look closely and then they see it; a long, red, bubbly river filled with thick gloopy slosh. “Bleh!” say the four almost in unison. “It stinks!” says Flora, pinching her nose. “Well, the only way to Pardes is onwards and forwards. So, red river here we come,” says Timber, cautiously dipping his toe into the goo. “Yuck,” he says. “This is disgusting!” The other three follow his lead and step into the thick, red, slushy slosh. The bubbles are big and round and when they burst, they spray a thin layer of slimy, red mist over them. They were a few steps into the goo when Floral gasped, “My feet,” she starts to stomp in the goo. “My feet feel as if they are bubbling. It’s sore!” “Mine too!” shouts Lita. “Quick, let’s get out of here!” They wade as quickly as they can through the river. Red hot bubbles burst everywhere. SLOSH, SLOP, SLOOP, SLOSH, SLOP, SLOOP. Finally, with a long, desperate jump, they lift themselves out of the gloop and onto the dry sand. “Ooooh, aaah, ouch! My skin is blistery and bubbly!” cries Timber. “Ouchy ouchy!” cries Ciryl. “I just know we are going to regret this journey! I told you it wouldn’t be easy.” “Come on, now,” says a brave Lita. “Pour some sand onto your feet. It will cool them down.” With their feet covered in sand, the four continue on their journey, stopping every few steps to pour more sand onto their aching feet. They trudge on. The smelly red river lies far behind them. Just as Timber was bending down to pour more sand on his feet, he feels a little pinch. He feels another pinch, and another and another. What could it be? “Guys, I think something is nipping at my toes and feet. I think there’s something in the sand,” he says. “Gotcha!” he says, holding up one of the little wingless creatures while inspecting it. “And what might you be called, hmmm?” he asks. Suddenly he feels an intense itch where he felt the pinch before. He looks down and sees a small red bump on his foot. Suddenly the others start to shriek and stamp. “Lice!” shouts Ciryl. “They are lice! Get off! Get off! Get off!” The four stamp and stamp the sand off their feet. “Ooh, my feet are so itchy. I just want to scratch-scratch-scratch them,” says Timber “Come on, Timber!” shouts Floral. “Walk faster so they won’t crawl up our legs.” The four walk as fast as their limping legs could carry them. They walk and walk. They stamp and stamp. They scratch and scratch. “Look, there are some rocks ahead,” says Lita. “We can climb onto those and shake the sand off our feet. Hopefully then the lice won’t nip at us.” “Good idea,” says Floral. “We can also have a picnic and a little rest.” The foursome quickly pick up speed. When they come to the rocks, they stomp and stamp their feet until the last of the lice have tumbled off the rocks. Timber unpacks his rucksack. It is filled to the brim with food. He passes around the aloe leaves and artichoke heads. The four sit in silence. They are famished and tuck into the food. There is munching and crunching and biting and chewing. As they are feasting on their food, they suddenly become aware of another sound; a high-pitched, buzzing noise. It gets louder and louder and louder. They look up and stare in horror! A large cloud of blackness is heading in their direction….

Lita, the Juoy-baby of inner-light, chooses to give up a blessed life, filled with immense beauty and abundance, to embark on a very important mission. Despite being the beloved daughter of King Abner, ruler of Pardes, she becomes a Limp in the land of Faragh, a desolate and forsaken place. Here she learns that life is tough; a daily battle for food, shelter and survival. A battle between the haves and the have-nots. Her path crosses with three fallen Juoy-babies who she persuades to join her on her journey back to Pardes through the ominous Plaga Valley. In the Valley the foursome is challenged around every corner, facing terrifying ordeals, beasts and life-threatening dangers. It is an onerous quest. Can Lita’s light help lead these fallen Juoy-babies safely back to Pardes … and at what cost? The Juoy-babies was written for children 8 years and older with the hope that it might start a conversation about God, Jesus and the stories of the Bible. It aims to reignite a curiosity and interest in picking up and reading the best book ever written: The Bible. It is important to emphasize that this story is just that: a story. However, it points to the Truth. King Abner and Lita are ‘created ambassadors’ of God’s glory and serve to illustrate God’s brightness, attributes and character.

The ‘Juoy-Baby of Words’ is Marinet Brennan, a busy mother of four young Juoy-Babies. She was born in the Western Cape, South Africa, but now lives in Dublin, Ireland. She graduated at the Universities of Stellenbosch and Cape Town with degrees in Speech Pathology and Audiology. This is her first Novelette. About the Illustrator: The ‘Juoy-Baby of Pictures’ is Mari van Greuning, a busy wife, mother, grandmother, artist and author. She lives in South Africa in a small Northern Cape town called Springbok. She is a qualified Personal Assistant, but chooses to pursue her creative talents instead.