What was God planning before he created the Heaven and the Earth? 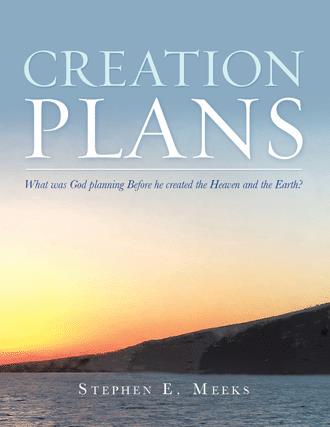 Chapter 1 Time Gen 1:1 In the beginning God… Gen 1:14 And God said, Let there be lights in the firmament of the heaven to divide the day from the night; and let them be for signs, and for seasons, and for days, and years: The first and most enduring act of God, according to his revelation, was to create what we now refer to as the fourth dimension, time. Time was the first dimension that was created, according to Genesis 1:1. Duration of existence began as if it had always existed. God started the clock of time and set the rest of his creation in motion. Everything that follows is creation from the voice of God in time, and it all started with a dimension of duration that God had intended to be eternal in its effect. God, in his wisdom and foreknowledge created the duration of time into which he placed the rest of his creation. He designed the systems of the separation of the day from the night; and let them be for “signs, and for seasons, and for days, and years:”(Gen 1:14), and then within his eternity, opened it up to contain his creation, life, and love. In the infinity of God’s existence, time is the duration of his outpouring of love and grace to make a beginning of Eternal beings to serve and worship Him. He spoke at the creation, yet as he spoke he put eternal plans in motion that he knew beforehand would unfold as history. It was his desire to not only do these things, but he created beings that would have a capacity to remember these acts, and he would teach them to learn how to write them down as a message to future generations. All of the events we know of, except the beginning of God and eternity, are included in the envelope of time. God recorded the beginning, and at this point in the book of Genesis did not say anything about what was before time. He did not reveal much of it to us and did not include it in many of his revelations. He also did not say whether or not he created other beings, except the angels, or other universes with other times to contain them. All we know from his revelation to us in Genesis is that there was a beginning, a singular event that begins his story. Science has considered time, and research has been done almost exhaustively about it. A contribution from Albert Einstein combined time with space in his theories, where he calls the new description of his understanding, "Space-Time." Time https://en.m.wikipedia.org/wiki/Time Space-time https://en.m.wikipedia.org/wiki/Spacetime

Before God created the universe, it apears to some of us that he must have had to undertake a lot of planning. God planned for all his creation to be put together and operate through mechanics, electrical and magnetic fields, and forces. He designed and planned for tiny subatomic particles to attract and repel, spin and fly. His atomic model baffled us for thousands of years. Yet, he also planned for life and spiritual existance. Stephen E. Meeks speculates on all of God’s planning in this important work, drawing on his knowledge of scripture and science. He seeks to discuss questions such as: What steps did God take to create life and achieve His plan of salvation? Did God keep some things a secret? What was he doing Before the creation? The author examines how God reveals his plan for a strong and orderly foundation on which He physically built creation and how His basic building blocks are revealed by science. From string theory and subatomic particles, light, day and night, and the heavens, to life, cellular mechanics, and more, this book hopes to share with you a new appreciation for God’s amazing work.

Stephen E. Meeks has a special interest in science and creation. He was originally headed to university to become a teacher, but God led him to Florida Bible College instead. He worked in the areas of equipment mechanics, technology and design, and has always been fascinated by the details of God’s engineering.