A Study to Strengthen Our Faith and That of All Believers and Readers by Drinking Deeply from the Fount of God’s Holy Word to Help All of Us Keep Our Eyes Fixed on Jesus! 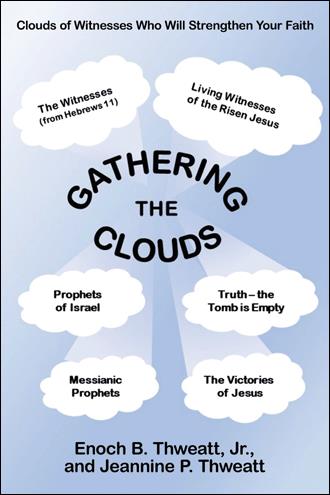 After a special study of many Biblical texts, the authors stated that, as a result of this study, their faith was much stronger. They were encouraged to write about these texts and share their findings with fellow Christians. From the responses they received, the authors were convinced that it was these scripture texts themselves that were crying out, Share our message with all believers everywhere! They then recognized, in hundreds of texts, the formation of Six Clouds of witnesses -- stories that demanded to be heard. From these Clouds came three things: a clearer understanding of the heart of God, the coherent message of the coming Messiah, and the strong testimony of the witnesses of Jesus, the Risen Messiah, victorious over death. This book is dedicated to letting God's word do the strengthening of every reader's faith -- in God and in Jesus, the Risen Messiah.

Enoch B. Thweatt, Jr., BA, Bus Ad, Vanderbilt; MA, Peabody College; MTh, Harding School of Theology (HST). He has served as: teacher/principle of elementary and junior high, classroom supervisor of student teachers, was elected to the board of directors of Taipei American School, and helped several small congregations become self-supporting. Jeannine P. Thweatt, BA, Biblical Languages, Harding University, She has served as: faculty secretary at HST; taught Greek to non-English speaking Chinese; published an English/Chinese songbook; and teaches English and Bible to international students on line. Together, they established the Christian Service Training Center in Taipei, Taiwan. In the U.S. they have helped establish a Chinese congregation in Nashville, TN, and have together taught many American Christians to sing in Chinese, and use the Pinyin (pronunciation alphabet) correctly. At present, they are working on the second book in A Trilogy of Clouds. Jeannine was secretary to five HST professors during the five years they lived in Memphis, 1973 -- 78. Jeannine: two quarters at David Lipscomb College (now University). When her mother was diagnosed with pancreatic cancer, Jeannine took care of her until her death in 1947. Jeannine later studied Chinese at Soochow University and Taipei Language Institute, both in Taiwan. After raising their seven children, she completed her B.A. degree in Biblical Languages at Harding University, minor in Chinese, graduating with high honors in 1985. Jeannine has taught basic Greek to Chinese students, published a song book in Chinese, and currently conducts World English Institute internet studies with students all over the world. The Thweatts began the Christian Service Training Center for local Christians in 1983. Later, at the request of young Christians, full-time training in the English language was offered. In addition, daily classes in basic American history and Bible completed the curriculum. This prepared them for study at Christian operated and other universities in the U.S. and other English speaking countries. The Thweatts live in Mempnis where they continue to study and write. Jeannine has begun to play a dulcimer, and Enoch loves to watch the birds at their feeders..