A Novel about the Compton Family—Tories in the Revolutionary War 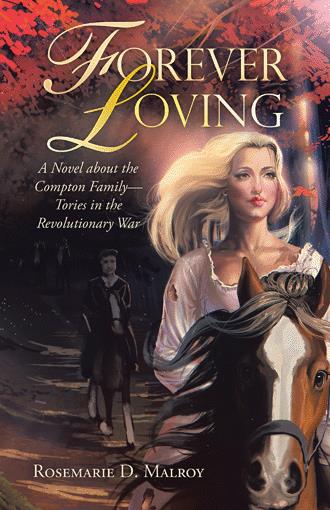 Chapter 1 War Long Island, New York April 19, 1775 The Continental Congress dispatches General Washington to command the army at Lexington and Concord. Frustrated, seventeen-year-old Elizabeth Compton picked up her hairbrush and threw it across the bedroom. She said to Nancy, her maid, “I don’t care what anyone thinks. I’m going to marry Matthew Ellis. I’ve known him all my life, and we are perfect for each other. He’ll ask me to marry him. I know he will.” “Hush, hush, child. Your father wants to see you.” Elizabeth walked down the long, dark hall, mumbling, “They all think me a child, yet many young women my age are married.” Elizabeth shuddered. What did her father want? Did he know about Matthew? She entered the large library with gold-embossed books and mahogany walls. The sun had set, and the bronze sconces were lit. Papa looked up at her, his expression somber. He was an impressive man with gray hair and intense eyes. He straightened his evening jacket. “Sit down, Elizabeth. I need to talk to you.” Sitting down, Elizabeth sucked in her breath, hoping he didn’t know anything about Matthew. Her father spoke with stern words. “We’re at war now, Elizabeth. I command you not to visit Mary Thompson. I don’t care how long she’s been your friend! You don’t understand things.” Papa’s bushy eyebrows lowered as he frowned. “Those Thompsons are Whigs—or traitors. We, as Comptons, revere our king. Taking his pipe from the silver holder, he adjusted himself in his plush, red velvet chair at Compton Manor. “But, Papa—” “Be quiet, Elizabeth. This is reality.” The Compton Manor household spun in turmoil with scurrying, whispers, and concern. Lord Compton sat ignoring Elizabeth, his face creased by worry. She knew what he was thinking, as he spent a lot of time talking about it. He hadn’t expected the North to capitulate to the South’s demand for continued slavery. If the country had not united, the North wouldn’t have the power to wage war. The Continental Congress said it was better that the South have slavery than all citizens be enslaved by Britain. Now these united states would fight against Britain. The Congress said that after the new country triumphed over Britain and they had a stable government, they would solve the problem of slavery. That meant that now they would go forward to fight Britain, and her father would be in jeopardy as a loyal follower of the king. Pretty Elizabeth, with her expressive blue-green eyes and ash-blond hair, usually coaxed Papa her way, but this time she knew he stood firm. She arose and marched out of the library, her green silk dress swishing. Mary, her best friend, an enemy? Impossible. She had loved Mary as long as she could remember. If gentle Mary was an enemy, what would Matthew, her secret love, be? Tears welled in her eyes. At least her father didn’t know about Matthew. The last time she saw Matthew, they quarreled over the war, and now he might leave to fight with the Whigs. She had to see him to ask his forgiveness and establish their relationship. No matter what Papa said, she needed to talk to Mary, Matthew’s cousin. She might know why he hadn’t sent a note. Usually Mary delivered Matthew’s messages to Elizabeth at the back of the mansion in the grape arbor. Determined, she grabbed her navy cloak and ran down the back stairs, slipping out the servants’ entrance, glad the dark night enfolded her. She knew the ten-minute walk through fields and woods to Mary’s by heart, and the light from the Thompsons’ house would guide her part of the way. Fingerlike clouds covered the moon and came together, making the night blacker. She felt a drop of rain, shivered, and drew her cloak closer. If there were soldiers on Smith’s Road, would she be able to see them in time to hide?

In 1776 America is war torn in the revolutionary war and 18- year- old Elizabeth is torn too. Her convictions hold her loyal to King George, but her lover, Matthew, is a patriot. Must she flee with her family to Canada or should she remain in New York and marry him? A determined beauty, Elizabeth endures the grief of death and the grueling escape to Canada with her family and the handsome bondsman, Edward, who eventually loves her. Can her love for Matthew endure forever? Traveling to St. Brunswick and Quebec City, Elizabeth finally learns the answer.

Rosemarie Malroy led a varied life being a forester's wife living in isolated forests, Indian reservations, and Wash. D.C. This enables her to write with diversity. Some of the elements of the story she took from her family's history--Tories that fled to St. Johns or PEI. She has written and published for years,and she and Jewell Johnson started the Fountain Hills Writer's Group winning awards for helping writers. A widow, she is the mother of three sons and five grandchildren and lives in Fountain Hills, AZ