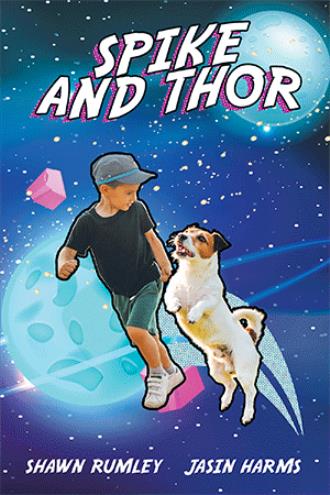 David says "hold on" points his finger like a gun and pulls the trigger at Spike. he falls over dead, playing dead.. another trick taught since day one. David muffles his laughs, he opens the door. he says "WOW! MJ, sorry I had no idea you were here". MJ smiles and says "the door was wide open, I've been calling up here for like 5 minutes and I heard talking so I came in". David says "you heard me talking to someone?, oh I was reading comic books, maybe that's what you heard" MJ says "sounds fun, while she looks around the room. OK I'm here to tell you about tomorrow and to see spike". David says "I was just telling spike, about how I was going to take him to a persons house and he got so excited and crazy I had to shoot him". MJ shines with pleasure saying "that's great" together they say "OK then." They both blush a bit, MJ looks down, sees Spike just laying there. MJ says "AW! look at her". Motionless Spike, David says "watch this". Davis kneels down saying "oh by goll! my dog, can anyone help me!". MJ laughing at the whole scene "you there! young girl! help! Check for a heartbeat!" MJ now on her knees plays along listening for a heartbeat says "I hear nothing" MJ giggles saying "she's a goner" David pretends to use the defibrillator paddles like the ones on TV, Spike wiggles around the bed, then again with the paddles, they laugh and their eyes meet, they have known each other for almost a decade but have never really met, not much alone time at work. They smile slightly, just then spike gave one more jerking motion, pop your her head up, they both acted so surprised for the resurrection, Spike so excited began jumping all around, MJ started petting her, Spike calmed down.

Watch as a young David gets smarter and becomes Thor. Every superhero needs a sidekick and who better than Spike. Watch these young rascals get in trouble. As a young man perform an operation on a puppy. Admire the culmination that comes from a speaking animal.