Giving Christianity Back to Agape Love

A New Paradigm for Being Church Together 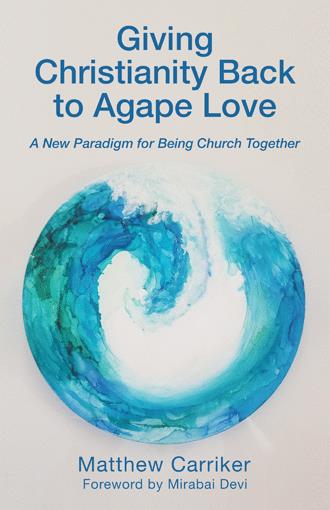 I grieve deeply the hurts that have been done in the name of Christ. A superficial glance at history shows how entrenched the church has been in anti-semitism, the subjugation of women, and the rejection of persons who are lesbian, gay, bisexual, transgender, or gender non-conforming. A quick historical study shows the oppressive violence of the church towards people considered “heathen,” “pagan,” or “heretics”, which includes Muslims, Native Americans, “witches”, atheists, and anyone considered non-Christian. And, the church is complicit in what Jim Wallis calls “America’s original sin- the theft of land from Indigenous people who were either killed or removed and the enslavement of millions of Africans who became America’s greatest economic resource.” For centuries, Christian circles have been defined by theological beliefs rooted in a vengeful, violent, judgmental God. These beliefs have been the foundation for vengeful, violent, judgmental Christian behaviors. It is no wonder that people aren’t interested in church. Modern people resonate with Gandhi’s statement, “I like your Christ. I do not like your Christians. Your Christians are so unlike your Christ.” The current perception of Christian culture and communities is so toxic that the majority of young people outside the church think of Christians as judgmental, hypocritical, anti-gay, and out-of-touch with reality. Overall, most people see Christianity as a set of outdated beliefs. And they’re not wrong. So we grieve. Yet, an increasingly vocal minority in the church is seeking a different way. This minority mourns the fear and violence committed in the name of Jesus, while seeking to move the church in a radically different direction. In this new direction, love comes first, and beliefs are secondary. “Are we ready to say that Christianity must no longer be defined by a list of unchanging beliefs, but rather… by a way of life centered in love, as embodied by Jesus?” A consistent thread in Jesus’ life is his persecution at the hands of the religious elite for challenging laws, traditions, and beliefs that weren’t in alignment with love. Jesus was considered a heretic in his day for asserting the supremacy of love. Prophetic Christians today are simply saying that we never fully got or lived this message in our church communities. Jesus’ life and ministry weren’t about ushering in a new set of beliefs. Early followers of Jesus were known as “The Way.” Albeit imperfectly, those early disciples sought to live out the path of love that Jesus embodied and taught them: “By this everyone will know that you are my disciples, if you love one another.” (John 13: 35) In short, Jesus offered a new way of holding our beliefs, based on one criterion- love. In the gospels, Jesus respects the law and beliefs, except when they no longer resonate with, you got it, love. Jesus’ question to Christians today is simple- do your beliefs align with love? This question calls Christians towards deep self-reflection and examination. If we are known as Jesus’ disciples by our love, not by our beliefs, then we must take a long and close look at how we re-orient our lives and our communities. Jesus came to bring in the age of love. The early church was on fire for divine, unconditional, inclusive love. Imperfect though this early church was, those disciples and communities were so magnetic because they lived out a way of love and grace, even when it meant persecution and martyrdom. Most of Jesus’ difficult words were directed at religious authorities whose beliefs acted as a barrier to love. Several hundred years later with the era of Constantine, Christianity on the whole reverted back towards a foundation of beliefs. It is perhaps the ultimate irony that beliefs again became primary, now in Jesus’ name. Since the 4th century C.E., it has been a vocal minority of mystics, prophets and peacemakers that have seen the path of Jesus first and foremost as the path of love. This vocal minority is increasing. Our current reformation in religion does not negate the importance of beliefs. Indeed, our beliefs influence and determine our behavior. Our modern day mystics and reformers are encouraging us to move back to a simpler creed: that love is our path, love is our guide, and love is our foundation. In this spirit, we ask of any belief, ritual, or tradition- does it align with love? Let’s test it and find out. Can we be as unforgiving with traditional Christian beliefs as scientists are with their hypotheses? Most every other discipline in human history has change and evolution built into it. Yet theology has been resistant to this trend. The hoards of people voting with their feet about church are proof enough that this trend is no longer tenable. Scholars, theologians, pastors, mystics, and religious leaders from all walks of life- we must begin the difficult task of examining and evaluating our faith. As we do, we will find that there is much to leave behind. This is the “rummage sale” Christianity must undergo to survive as a religion. It is a much needed purification of unhelpful religiosity, so that the spiritual depth of Jesus’ life and ministry can emerge once again. As people of faith, we “do not grieve as others who have no hope.” And this is the good news- that underneath all the rubble and grief, there is something beautiful, powerful, and largely untapped. It is the witness of “The Way.” It is the embodiment of unconditional love, service, and peace that we see manifested in Jesus’ life, teaching, and ministry. It is the life that Jesus lived, and that he calls us to in his parables and teachings.

How could a church that has been plagued by anti-Semitism, the killing of the Crusades, and the violence of the Inquisition (to name a few) be redeemed of these evils? Quite simply, it has always returned to Jesus. When you return to Jesus, you return to the heart of his message: agape. Agape is a Greek word in the New Testament referring to a love that is without limits and beyond conditions. Agape is the love that God has for us, and that we are called to have towards one another. This book centers around this one assumption: God loves us unconditionally. Our task- individually and as communities- is to be instruments of that love. This book reenvisions traditional Christian beliefs- including sin, the Bible, salvation, homosexuality, pluralism, Jesus, and atonement theology- through the lens of agape love. What would the Christian life look like if we embodied the good news in community as contemplatives in action? In a time when churches are dying and failing, giving Christianity back to agape love has the power to bring life into a religion that feels old, worn out, and over-institutionalized. To return Christianity to Jesus is to give the church universal back to a love that is boundless, free, and unconditional; to a love that finds its heart in service, peacemaking, and radical transformation; to a love that will set the world on fire.

As an ordained Christian minister in the United Church of Christ (UCC), Rev. Matt Carriker currently pastors a new church in Waltham, Massachusetts called “Agape Spiritual Community.” Matt leads Christian and interfaith retreats for youth and adults, and is a spiritual/life coach. Matt is passionate about altering Christianity today into a spiritual tradition that models the unconditional love of God and the life and teachings of Jesus, and that engages in both contemplation and action. This is his first book. More info about “Giving Christianity Back to Agape Love” and Agape Spiritual Community can be found here: https://www.achristianyogi.com or http://www.agapewaltham.org.