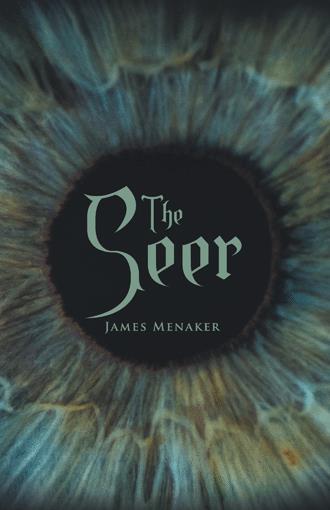 Clack. Clack. Clack. The Seer's staff echoed throughout the deserted stone hallways of the Royal Palace. Wall mounted torches flickered as he slowly walked by, alone except for his wavering shadow and his thoughts. The Seer's eyes darted back and forth as he took one labored step after another. "What am I doing here?" he whispered in a raspy voice, unable to speak any louder. "Why me?" The Seer's heart pounded furiously, fear driving it faster and faster. He walked with hunched shoulders as if carrying a pack of stones on his back. Yet he continued moving forward, step after step. Clack. Clack. Clack. Suddenly he realized he was standing in front of the Great Doors which led to the Royal Dining Hall. His mind went blank. His mouth went dry. Sweat poured down his face. His knees shook as he tightened his grip on his staff to keep from falling over. The Seer squeezed his eyes shut as he lowered his head, "I can't do this. Not like this. Not on my own." He started to turn from the door when he heard a familiar voice. "Eli? Eli is that you?" A small, balding man wearing a fine black robe with red trim hurriedly approached from the opposite side of the hallway. A smile spread across the Seer's face as he breathed out a sigh of relief. "Of course," he muttered to himself, shaking his head. "Of course you are here." He stood erect and turned to face the smaller man, "Hello, Obi." Obadiah had been a friend long before he had moved to the capital and become the Palace Overseer. "It is you! The guards told me there was a dirty beggar claiming to have a message for the king," Obadiah embraced his childhood friend and chuckled. "Eli, it is so good to see you again. I had no idea they were referring to you. How did you get in here? I thought the guards turned you away.” He took a step back, examining the Seer for the first time. "In the name of all that is good and holy, what are you wearing? And why do you smell like the wrong side of a horse?" Obadiah took two more steps back and brushed off his robes as his nose wrinkled. “What happened to you?" The Seer barked a great laugh. "It's camel.” Obi looked completely confused. “The tunic. It is not horse, it’s made out of camel's hair. Do not ask me why. It is a long story and it is nowhere near the craziest part of my life right now. Speaking of which," Eli's voice dropped as he took on a serious tone, "I need to make a request.” Obadiah motioned his friend over to a cedar bench in the hallway, "Of course, anything you need." Both men sat as Obadiah said, "Now what can I do for you?" The Seer sat silently for a moment having an internal debate. He closed his eyes and nodded as he came to a decision. "Obi, I do have a message for the king," he stood and looked right into his friend's eyes. "I formally request an audience to present my message to King Ahab." He waited silently for the Overseer to respond. Obadiah gave his friend one more long, questioning glance and then tilted his head and looked at the ceiling as he thought through the King's schedule. "All right, I could find some time for you two days from now. The king listens to..." "Tonight, Obi," the Seer said softly, "Right now." The smaller man whistled and wiped his hands on his robes as he stood up, "That's impossible and you know it. Let me move some things around and I could get you in tomorrow." The Seer shook his head and approached his friend, putting his hand on Obadiah's shoulder, "It's got to be tonight. It's big." "How big?" Elijah stroked his short, black beard as he tried to figure out how to respond. "It is fire from heaven, fate of the world, life and death, good versus evil, future of our nation hanging in the balance big." The other man raised one eyebrow. "This is historic, Obi. After tonight, nothing will be the same ever again." Obadiah took a step back. He took a deep breath and thought for a moment. "Okay, but this better be good. Wait here." The black and red cloak whirled in the air as Obadiah turned and entered a side door. The Seer stood silently in front of the Grand Doors, awaiting his audience. He stood straight and calm, free of the terror that had accompanied him into the Palace. He chuckled to himself, thinking back on his adventures with Obi, and then took a deep breath, telling himself he was ready to deliver this message. With a loud crack the doors opened and a wave of chaos crashed down over him. The Seer brought his hand up to shield his eyes while they adjusted to the heat and light pouring out of the Hall. Hundreds of people were crammed into the Great Hall stuffing themselves with every morsel of food they could find. The air was filled with laughter and screaming and songs and cursing, every guest straining to be recognized over the din of the chamber. The only open space in the entire Hall was the path from the main doors to the Royal table. The Seer let out a breath that he did not realize he had been holding. He took one step, then another, slowly making his way through the revelry towards the King. Every step that he took brought more eyes upon him and more silence upon the room.

Legends say that long ago a mystical order of men and women walked the earth. They were known as the Seers. Stories claim that they saw the invisible, knew the unknowable, and performed impossible feats of power. They wandered the earth as champions for the oppressed and heralds of days to come. Seers were cloaked in mystery and suspicion, but when they spoke, the wise listened. Elijah is a Seer, widely considered to be the greatest of their order. He is called to confront the powerful King Ahab with five simple words, “There will be no rain.” The Seer narrates the dangerous, exciting and God-given journey of the prophet Elijah in an entertaining and engaging way. This young adult adventure brings the ancient story to life and shows that when gods battle for the future of mankind, one person can change everything.

James Menaker is a life-long resident of Fairbanks, Alaska. The winters there are long, dark and cold…perfect for writing a book. He is a part-time youth pastor, part-time writer, part-time blogger, part-time non-profit manager and full-time husband and father.