My Friends Wouldn't Let Me

A Story of Courage, Determination . . . and Love

by John A. Broadwell 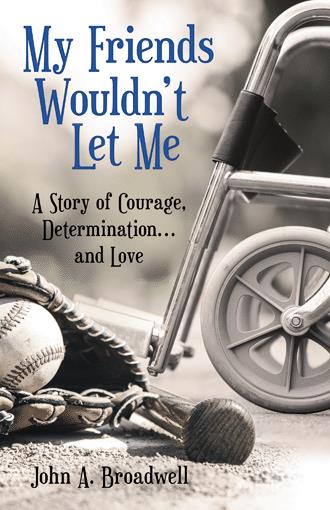 They arrived at the Minute Mart and pulled into a parking space right in front. There was only one other vehicle, a rusty fifteen year old Ford pick-up that looked like it had once been blue. Bobby noticed a Bixby High School Spartans decal in the rear window. What are people from Bixby doing up here? They’re a long way from home. “That old truck looks like it’s from Bixby,” Bobby told Laura Sue. “We beat Bixby during the season. Their fans and players were really nasty. They were the worst sports we played all year. One of their team parents got on Coach Brawley so bad that I thought Coach might go into the stands after him. When we got home, he dropped them from our schedule for next year and after.” “Maybe whoever has that truck will be nice,” she replied. “Buddy and I’ll wait here.” Bobby opened the door and rolled out of the van and up to the automatic door opener button at the store. As soon as he entered the store and the doors shut behind him, he knew something wasn’t right. He looked to his left, toward the cashier. He recognized the young man behind the counter, but couldn’t recall his name, maybe Ralph. The cashier was standing rigid and Bobby noticed a drop of blood coming from his nose. His face, upon a closer look, appeared bruised. “Are you ok, Ralph isn’t it?” Bobby asked. Ralph didn’t respond right away. Bobby heard a sound coming from behind the counter, but not from Ralph. He couldn’t make most of it out, but someone apparently hiding behind the counter was talking to Ralph. “Turn around and get out. We’re closed,” Ralph said. But, the way he said it… his voice trembled. Bobby assessed the situation. Someone was holding Ralph hostage, and probably robbing the place. Was the perpetrator alone, or did he have accomplices? He couldn’t turn around and run away, leaving Ralph to the robbers. “I’m not leaving Ralph. The police are on their way.” A bold bluff. Hope they believe me. When he said that, the previously unseen figure behind the counter stood up. He was a tall, slim, rather unkempt character wearing a Bixby Spartans tee shirt. Not too bright. Wearing his high school’s shirt to a robbery. But, what Bobby saw next sent a chill down his spine. The thug was waving what looked like a small pistol. It also turned out he was not alone. Another person, a little heavier and taller, with long hair that looked like it had not been washed in a couple months, came around the corner of the row of shelves in front of Bobby. What if they see Laura Sue and Buddy in the van? He rolled forward to try to put the front door out of their sight line, if possible. “Well, look what we have here. You’re that cripple from Brookside. You guys cheated to beat Bixby,” the guy with the pistol said. “Let’s teach him a lesson. Then we’ll get the cash, a few beers and hit the road.” These lunatics are really stupid. They surely can’t believe we wouldn’t call the cops and tell them what happened. Unless they plan to kill us both. That would mean they’d see Laura Sue when they leave the store, and kill her too. They couldn’t leave any witnesses. The Bixby boy with the pistol came up to Bobby’s chair and leaned into his face. “I’m gonna whip your butt,” he said. “I don’t think so,” Bobby said. “In fact, if you leave right now, you’ll only have the police to worry about and I won’t have to hurt you.” The guy with the gun straightened up. He and his buddy doubled over with laughter. “You’re sitting there, helpless, in a wheel chair and you’re threatening me?” He stepped back and looked at Bobby. He pulled his arm back. “You ever been pistol whipped?” “Last chance,” Bobby said. As the assailant started forward, Bobby completed his reach into his left saddle bag, pulled out the pepper spray and let him have it full in the face. Bobby was careful to turn his head so the spray would not hit him. The gun fell as the pepper spray took effect. He screamed in agony, trying to wipe it from his eyes. The more he wiped it, the worse it hurt. His accomplice made a rush toward Bobby. “You’re gonna get it now, you…” But, Bobby was ready. With a single motion, he slid the billy club out of its place in his left saddlebag and backhanded his attacker in the face. He heard the crunch of the fellow’s nose breaking. While he seemed suspended in space right in front of Bobby, Bobby took the opportunity to strike another blow with the club and the guy went to the floor. Meanwhile, the first thug, still blinded and screaming, tried to salvage the situation by throwing himself toward Bobby. But, his perspective, as well as his sight, was off and he fell a little short. Bobby gave him a crack on the side of his head as he fell. “Pick up the gun, Ralph,” Bobby ordered, “and give it to me.” “It’s Paul.” “What? One of these guys is named Paul?” “No, my name is Paul.” “Sorry, Paul. I thought it was Ralph.” Just then, he heard sirens approaching. Within seconds, it seemed, two armed policemen, pistols drawn, burst through the door. “How did you know to come?” Bobby asked. They ignored him for the moment while they took in the carnage and removed the pistol from Bobby’s hand. Then, satisfied that any threat was neutralized, the cop that seemed to be in charge said, “A woman called 9-1-1 from the pay phone next door and said there was an armed robbery in progress.”

Bobby Murphy was a popular high school senior and a star athlete when his world turned upside down after an accident that left him without the use of his legs. With a supportive family and good friends, Bobby struggled with his disability, learning to overcome the obstacles that someone who cannot walk faces. He then found success on the baseball field and the love of a special girl.