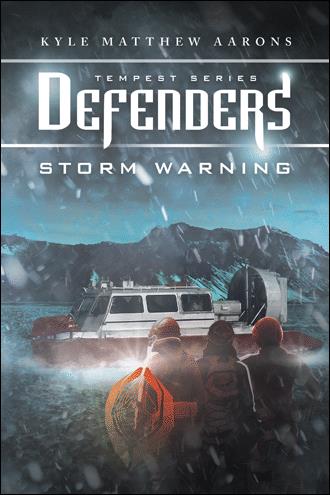 Battlement's voice came over the radios of all the hovercraft. "BEARS 97, I am giving you Priority Alpha clearance from USDT 19 Command to retrieve the target by any and all means necessary. Joshua M. Stellman is now the onsite field commander with full USDT authority. Battlement out." "Thank you, Command!" Josh shouted, then switched frequencies so he could talk only to the other hovercraft without bothering USDT 19 Command. When Josh spoke again, he was all business. "Rex, we are going to come in hard and fast. If they are who we think they are, they will certainly attack us. The second those idiots come after us, I want you to park and go to the back of your craft. You will see the large radio is on. Don't touch the settings as I have it configured to find the senator's kid's cell phone, but I want you to press the transmit button and let go. If you have a good enough signal, it should cause it to ring. When someone answers, find out where the kid is and move to protect him. You have got to prevent them from getting to him, no matter what!" "You got it!" Josh licked his lips for a few moments before continuing. "Logan, the second we take fire, I want you to open up the side opposite of the incoming. "Tanner and Colt, I'll angle straight for them to give you both some cover. Use it to go airborne. You two need to take out the snowmobiles. Skye, if there are snowmobiles to the north like Rex thinks, you need to cut them off.” “Consider them scrap metal!” Skye snarled. “Don’t I know it!” Josh nodded as he spoke. “EAGLE, I don’t know anything about you, so stay behind Skye. She won’t let anything bad happen to you. “All focus needs to be on their snowmobiles first! Without them, they will be on foot, which cuts down on their ability to outmaneuver us. Also, everyone put on your headsets. Once the bullets and augmentations start flying, there is no reason to worry about being tracked by our radio signals, and we will need to talk to each other. And guys, you heard what USDT said, we need to go into this ready to bust some heads." "Fine with me," Colt growled. "It's time to pay these bastards back for what they did to Paul and the others from BEARS and COUGARS the last time Woodsman and his punk followers poked their heads out for the woods." "This isn't about revenge, Colt…" Skye responded Josh closed his eyes as he couldn't help but remember the funeral of the kid who had been the cadet squadron leader when he had been bumped up to Squadron level. Less than two years later, that kid had been killed by the Woodsman's bunch. The rouge Augments all but wiped out a training camp for advanced squadrons, killing over a dozen kids from the Canadian Organization Unseasoned Gifted Adolescent Resources Squadrons (COUGARS) and nine others from Montana and Idaho BEARS, including Paul. The Woodsman's gang then made the mistake of sticking around so they could hit a Canadian military convoy. This had proven to be a serious miscalculation as the majority of the Woodsman's gang ended up getting pounded by a combination USDT and Red Leaf Defenders action. Josh found himself clenching his fist as he remembered Paul's mom weeping during the funeral. "Skye’s right Colt. But you're also spot on; it is time to show these jerks that BEARS 97 cadets are loyal to the living and the dead. We don't forget and payback is a real bitch." Garret glanced over with a hopeful look as he spoke to Josh. "Maybe they'll run when they see us." Josh shook his head, "Not likely. They hate the government and we have huge FEMA insignias on both sides of us. They aren't going to back down when we come out using augments either, at least not at first. They hate the BEST program and everything it stands for. They see us as being brainwashed by the thing they hate the most, the United States." Suddenly the hovercraft Logan was piloting veered hard to the right, "I got an IR signature of a snowmobile with only a driver. Looks like he has a rifle on his back." "Head straight for it!" Josh yelled. "All squadron members get ready to deploy!" A few seconds later Tanner's voice came over the radio, "He's spotted us and is unslinging his rifle." "Wait, we want him to pull more to us." "They're on the way, Josh," Rex reported. "The three I can see all banked to the southeast at the same time, so they either have a telepath or radio communication. And Skye, you definitely have at least one close to you. I can hear the engine now!" "Give the radio a try now." Josh ordered. "We'll keep 'em busy long enough for you to make contact and get to the kid. Tanner, Colt, get airborne now and take out as many snowmobiles as you can." Josh glanced nervously over at Garret as the others quickly reacted to Josh's commands, "This is not exactly the squadron initiation we all had planned for you." Garret gulped as he pulled on the straps of the Kevlar vest to make it as snug as possible. As he pulled the parka back on, he responded with a bit of a grunt. "After getting to know you all, I think this might actually be easier to deal with than you all." Josh flashed a grin and cringed at the same time as the first bullet bounced off the side of the hovercraft with a metal-on-metal twang, "You're probably right."

In a world were religion and prejudice has turned to look at the world as if it has two races, the Normals and the genetically powerful Augments, skin color is nowhere near as important as what "race" of human you are. For a young group of Augments in Montana, being in the Defender Program means they are known as Augments by all. However, being a Defender also requires them to be part of a network designed to teach control over their abilities and help defend their homes and the USA as a whole. Will those who hate Augments corrupt the kids or will the young Defenders step up when no one else can to battle their own kind and save Normals who have tormented them?

Kyle Matthew Aarons is a member of Rocky Mountain Fiction Writers (RMFW) and Independent Published Authors Liaison (IPAL). He has been writing for over 20 years and is published works for free on several websites. He became a member of IPAL with his first commercial book: A.I.M. Chronicles- Ripples of Aggression. Kyle resides in Colorado. Other than writing, he lives in a place ideal for several hobbies including panning for gold, hiking, fishing and spending time with his Siberian Huskies.