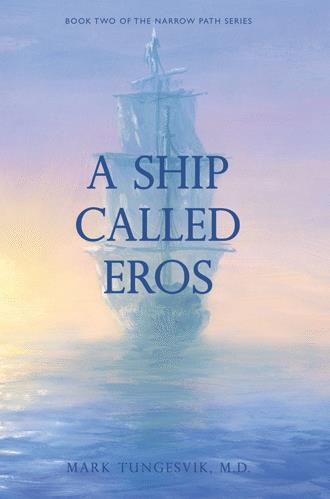 As a citizen of the City of Ash, your mind is clouded with false realities. You stumble around the thick, oppressive smoke that surrounds the city. You spend your days trapped in a self made delusion. Will you join Redd as he escapes this city and embarks on the journey of a lifetime? Live life to the fullest as a sailor of Eros, where your mission on the high sea is to seek and destroy the monsters of the deep. Fight for you life on a ship with no rudder against a horned beast with razor-sharp teeth that shoots out of the water wanting to claim you as its prize. As the ship banks hard, the entire crew leaps on the great monster. Without thinking, you boldly swing your sword and slay your mark. There is no fear in your heart, only the joy of sailing the narrow path. This is the second book in the Narrow Path series. Book one of the series is “The Song of the Bear”. This book can be read as a stand alone book although if you like it, we encourage you to read “The Song of the Bear”

Mark Tungesvik is a medical oncologist practicing in Columbia, Missouri. He holds degrees in religion, medicine, and law. C. S. Lewis and Francis A. Schaeffer heavily influence his literary works.