Engaging the Sons of Darkness

What Happens When Unseen Forces Envelope the Jack Fork Mountains? 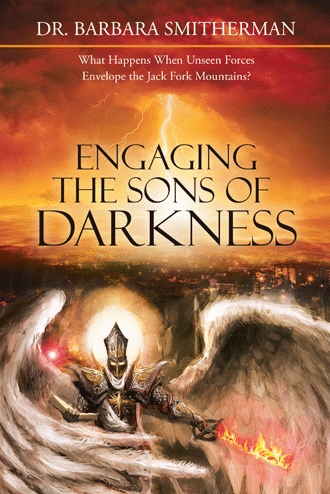 The June air was humid; darkness enveloped the small town of Evansville, a town sat upon an imaginary throne, isolated in time, a long forgotten relic. Scattered throughout the landscape a few glimmering lights could be seen coming from the scarcely populated town that was closed up tight. As the town lay in its morbid silence, a slight movement coming from the underbrush was stirring the leaves, a sound so faint it could easily go unnoticed. Being aroused from a peaceful nap, a lone tan dog, sensing danger, suddenly raised its head, let out a deep growl, and moved onto the safety of the porch, as the dark shadowy figure moved closer into the town.

Standing on the edge of the town surveying the landscape, a newcomer—a strange figure of a man—was watching the actions of the night unfolding as if it was a scene in a play.

On the east end of the main street, the shape of a tall steeple attached to a white building in desperate need of painting could be seen. This would serve as the house of worship to the fifty more or less citizens that regarded themselves to be devoted followers of John Wesley. Approximately two hundred feet to the right, stood the town's only grocery/general store and gas station. It was inside the general store that a single beam of light penetrated the darkness surrounding the building. No other building on the town's main street showed any sign of life or activity.

With what would appear as a form of time travel, the stranger was standing in front of another of the town's establishments set off the main street on a side road closer to the opposite end of town. One could hear, coming from the inside, the sound of clicking as a white ball made its way across a table and made contact with one of the several other balls of differing colors. The voices had a type of gaiety as the people inside were engaged in their own unique type of recreation.

Approaching the entrance, the stranger was hindered from entering the building by the sentry. With eyes that were cold and unwavering, the sentry was waiting to attack this stranger if he made an attempt to enter. After several minutes of visual combat, the stranger made his way away from the door. He knew that he alone was no match for this large imposing figure. The stranger was all alone in this town that time had forgotten.

Engaging the Sons of Darkness takes readers deep into the realm of the spiritual, where unseen forces are at work, influencing the lives, actions, and thoughts of people. Engaging the Sons of Darkness perfectly balances the natural and supernatural worlds within Evansville, a town set deep in the Jack Fork Mountains of Oklahoma. It weaves a suspenseful story of greed, murder, and deception that is a true page turner.

Dr. Barbara Smitherman a much sought after conference and seminar speaker is a registered Nurse, ordained minister, Bible instructor and Biblical counselor. She is the Founding Pastor of the Tabernacle of Praise Worship Center Inc. in McAlester Ok and the Women God’s Weapons Women’s conference and retreat. She received her bachelor of Ministry degree from the Master’s International school of Divinity, and her Doctorate of Divinity from Master’s International University of Divinity. She and her husband Douglas reside in McAlester OK they have two grown children and nine grandchildren.