When Cotton Was King

A Novel About Slavery and Civil War 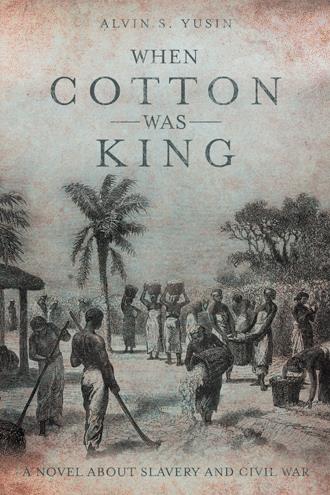 Suddenly grey uniformed Confederate soldiers appeared, running from the onslaught of the Union force. Terrified , panicked, they charged in all directions, fleeing from positions at a ford called Sudley Springs, running as quickly as they could in the one direction open to them, up the southern side of Henry House Hill, their rapid movement bringing them closer and closer to where Luke Blackstone stood. His men were poised crouched down on one knee, rifle barrels cocked. As Southern soldiers ran past his crouching men, cannon shells crashed down around him, tearing up the earth. Heavy smoke made his eyes water, but he was able to discern General Jackson, who stood upon a rock, straight and tall, not moving a muscle—like a statue, Luke thought. Still the panicked soldiers came, one upon the other, bringing with them cannon fire from Union batteries, cannon shells that whistled and blew up with a roar, exploding all around him, churning up the earth and grass as they hit the ground, exploding Southern soldiers’ bodies into a thousand bloody fragments, those disassembled carcasses staining ground with blood and gore. And should those broken bodies cling to the life inside, cries of pain and anguish could be heard above gunfire and above the cannon’s roar. As the Southern soldiers raced up the battered hill, at times tripping on the broken ground and falling over bodies that now carpeted the earth, Luke Blackstone heard a voice cry out: “There is Jackson, standing like a stone wall!”


As those words were spoken, a soldier carrying the Confederate flag fell and dropped it. There it lay as he jumped up and in his terror ran off to save himself leaving the flag behind. What came over Luke, he would never know, but with the words There stands Jackson like a stone wall repeating in his head, he ran forward to pick up the colors which he held high above his head crying: "Stop! Stop! Hold the line! Here! Here! Hold the line!”


Then with all his might, he struck the pole into the ground, and there it stood, banner unfurling slightly in a gentle breeze that moved the stagnant summer air. “Rally round our flag!” he cried. “Men of the South, hold here! We cannot let them take our flag.”


Retreating Southern soldiers stopped dead in their tracks and let out a cheer that echoed through the hills, then turned to face the onslaught of Union forces running up the hill. As those forces bore down upon them, Captain Blackstone issued his first order of the day:


“Fire!” he cried to the men in his command— and they, along with thousands of others who had stopped to turn and fight, fired their rifles. The Union soldiers toppled like wheat struck by a scythe. “Fire!” he cried again, a second volley sounded, and more Union soldiers fell. Union cannonballs continued to whistle through the air, exploding all around them, furrowing the ground. But they were off their mark and more frequently blew up their own men rather than soldiers of the South. Shrieking, the Southern troops charged forward breaking into Union ranks, firing rifles, small arms, thrusting bayonets. Luke Blackstone stood beside the flag, saber drawn, firing from a pistol held in his other hand. Union soldiers fell further and further back, now repelled by Southern forces, reinforced by Jackson’s men and a recently arrived contingent, fresh from Harper’s Ferry.


Union forces panicked fleeing down the hill followed by men in gray filled with rushing fury, who toppled and destroyed everything that stood before them. Cannonballs exploded, tearing up the earth. Men fell down beside Luke Blackstone when hit by pistol fire, as others, struck by cannon shells, exploded into fragments. But Luke’s heart held no compassion for the men he killed, no pity for the shrieking wounded, no horror at the blood and gore that held fast to his boots—it knew only raging fury for soldiers of the North that he shot and stabbed and killed . Union forces wanted to destroy his home, his land, his family... destructive creatures, devoid of human features, who would do anything to see him dead. But he would destroy them first. Yes, he must destroy them first if he was to survive—no, if the South was to survive.


For those Union soldiers, the worst was yet to come. Racing down the cratered hill toward the tree-filled forest they could think of nothing more than their own survival. Confederate cannons positioned on Henry House Hill now controlled the field. From that precise position they fired down upon the Northern troops. Those potent missiles came whistling down the hill, striking forest trees whose thick trunks they exploded, tearing trees apart creating heavy fragments that as they fell to ground struck fleeing Union soldiers who were crushed beneath them. And in only twenty minutes the verdant forest vanished, replaced by shattered tree stumps, fragments of exploded trees, and bloody remnants of fallen soldiers caught up in broken green leafed branches.

It is 1795 in Williamsburg, Virginia, as the son of an alcoholic father and bastard mother grows up in poverty. Still, little Andrew Blackstone is resolute to make something of his life—and does years later when he acquires a fortune through illegal slave trade. Determined to achieve economic and social dominance, Andrew eventually marries into the Wellworth family, rich in ancestry but poor in purse. His wife, Rebecca, who was raised by a slave until her father sold her, wants to buy back Momma Jo. When she learns she has died leaving two sons, Michael and Gabriel, Rebecca buys and then frees the boys, prompting Michael to meet John Brown and participate in the Pottawatomie massacre. As the Blackstone family is impacted by other antebellum events that include the Fugitive Slave Act, Underground Railroad, and the Kansas-Nebraska Act, Rebecca gives birth to twins, Jackson and Arabella. But as tensions increase between the north and south and a civil war looms on the horizon, the Blackstones are all about to learn the power of battle and its ability to not just transform the country, but also their lives and the lives of their descendants.

The author is a retired physician certified in Pediatrics, Psychiatry and Neurology and Neurodevelopmental Disabilities. These credentials had focused his medical career on acquiring knowledge about development and interactions of children, adolescents, and adults. That information was put to use when he was put in charge of the Child Development Program at Los Angeles County Hospital. He served in that capacity for 30 plus years at which time he retired. He had an interest in the Civil War and slavery since childhood, an interest no doubt related to his being born on Lincoln’s birthday. Given his background he decided utilize his knowledge of human interaction and child development to write a work of fiction that attempts to explain how and why human experiences from childhood into adulthood and beyond produce perceptions and interactions that created slavery and led to Civil War.