An Account of Persecution and Survival in Colonial Africa 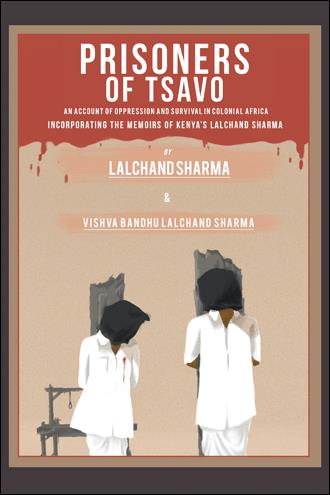 INNOCENT PRISONERS OF TSAVO is the autobiography of Kenya's Lalchand Sharma, whose lifespan coincided with President Jomo Kenyatta's, covering the years of Kenya's freedom struggle and the post-colonial letdown by the national leadership. During the Great War, four Indians supplying wood to the Lunatic Line were sentenced to death for collaborating with the German enemy. The trial (near Tsavo) was a travesty. Sharma refused to turn King's Evidence (to lie and thus escape death). Two of the contractors were shot within hours; another was hanged in public. Sharma escaped hanging because he seemed younger than 18. At war's end, a British judicial commission found all of them to be innocent, convicted on trumped up charges and suborned evidence. Sharma first lived in Kenya's perilous wild, then through two World Wars, and saw the transition to independence. During long Fort Jesus incarceration, Sharma learned at the feet of Indian leaders convicted falsely for directing the fuel contractors. Free at last, he -- a school drop-out from Himalayas' foothills -- became a head law clerk. Later, from businessman he became industrialist -- a typical paradigm shift: from dukawala (shopkeeper) back to the fundi (craftsman-maker). Gen. E. Vorbeck's most brilliant guerrilla war during the East African Campaign remains sadly neglected. It is vividly summarized in the book. Sharma's memoirs recount how the Indian freedom struggle's dreaded Ghadar movement was twisted by false British intelligence to put to death those three innocent Indians. This was rooted in a British psychosis caused by repeated defeats at German hands. It led to a conflation of hatred of Indians by white settlers (in the face of their demand for equal rights and its likely effect on wider unrest); the tussle between the British army and colonial civil authority; loose chains of command; and incompetence of top British brass, till Gen. J. Smuts of South Africa assumed charge. Sharma's life adumbrates the weight of Hindu religion, tradition, folk wisdom; and the interaction of disparate value systems. It reflects a joyful Punjabi upbringing and recounts Arya Samaj's contribution to Indian and Kenyan freedom struggles and the fight for women's rights. Sharma's wife was given Kenya's top Freedom Fighter Award; daughter Sheila Diddi was included among global women leaders nominated for the 2005 Nobel Peace Prize. Thirty five of the MS's 335 pages feature pictures and maps; a Glossary (of Farsi, Hindi, Punjabi, Sanskrit terms); a tiered Index. The 1,400+ citations were deemed by the Guinness Book as singular -- in setting a template for recording oral history as languages and cultures disappear. In interpolations, the son Vishva Bandhu Lalchand Sharma, a London School of Economics Ph.D., Barrister, and Western Michigan University Emeritus Professor of Social Science, provides a spate of anthropological, constitutional, economic, geographical, historical, legal, philosophical, political and sociological insights covering major events of the 20th century. The noted military historian Michael Howard said that his thesis was written in immaculate English. As State Counsel, Sharma revised the whole corpus of Kenya's statute law to bring it into compliance with the independence constitution.

Lalchand Sharma—on the surface—may seem like a regular man from a poor, rural area of British India. But look a little closer, and you will see someone with an indomitable spirit who refused to try saving his own life by giving false evidence during a trial near Tsavo, Kenya, against fellow Indians. This was when, partly to explain their defeat at the hands of vastly outnumbered German forces during the Africa campaign of World War I, the British made scapegoats out of innocent Indians. At the same time, the British were afraid that the Ghadar movement (an Indian freedom struggle) would spread to East Africa. In this autobiography, edited and set in its historical, geographical, and cultural context by the author’s son, readers will discover the manner in which the Indian and Kenyan freedom struggles coalesced. The author also examines two paradigm shifts that played out in the cultural integration of Indians in the larger Kenya nation. Learn about a fascinating and largely ignored piece of history, and find out how the author escaped execution while others died in Prisoners of Tsavo.

Lalchand Sharma was a school dropout from Punjab, India, who went to Kenya to make a future. He escaped execution even though three other innocent Indians were executed—partly as scapegoats for World War I British defeats at the hands of German forces. After being imprisoned with Mombasa’s Indian leadership, he renewed his education. He was ultimately found innocent of any wrongdoing and went on to be a law clerk, shopkeeper, and industrialist. Vishva Bandhu Lalchand Sharma, edited his father’s autobiography and set it in its historical, geographical, and cultural context.