How the Snowman Got His Clothes 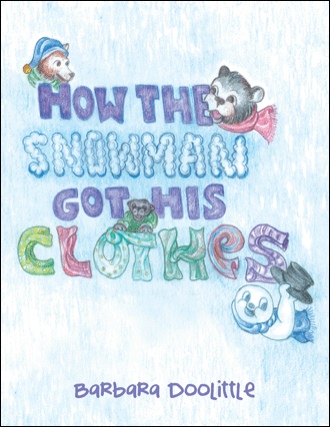 
Bear didn’t get it over on Foxy very often. He felt so smug that he got up and started bouncing up and down with his front paws on the trunk of a young sapling. Snow flew, and out from under the sapling flew Rob Rabbit, taking off with great leaps as fast as he could go!


Instinct kicked in on Foxy, and before he even really thought about it, he was after Rob Rabbit in a flash.


Foxy returned with his ears pinned flat and bearing his teeth.


“Dratted rabbit got away!”, he growled.


“Ah, come on Foxy, that old rabbit wouldn’t have made a good meal. Come on, let’s get Snowman’s face on him while the sun is still shining brightly.”


So off they scooted, snow flying everywhere. Of course Foxy was the first to arrive at Snowman’s supposed site. At the sight of nothing where something should have been, Foxy skidded to a stop. Bear, just behind him, went right over the top of Foxy, and landed plop! Right where a slight depression remained at Snowman’s supposed resting place!


“Where’s Snowman?”, said Bear, as he picked up his feet one after the other, looking to see if he had squashed Snowman under foot.


“There isn’t enough snow for Snowman to be under you!”, said Foxy with surprise. He began sniffing around the area.


“not only that, but our face stuff is gone and I see faint tracks, and I smell a faint odor of-let-me-see—Rob Rabbit! He took Snowman’s nose, I’ll bet! That dratted rabbit took my carrot!”

As they watched humans building a snowman from behind the bushes in the forest, they decided it would be fun to build a snowman of their own. They had no idea what would occur while they were building him or the adventures that were waiting for them afterward!

Mrs. Doolittle has studied animal behavior since she was a teen. It started with her own experiences—observing woodland animals on camping trips in the forests of Arizona. At that time, other people became interested in animal behavior, and several movies developed. Mrs. Doolittle lived on the Colorado River by Blythe, California for several years. This area had been a migratory path for many years. “Many animals wound up in my backyard, Including beavers, coyotes, a skunk named Spotty (he lived under our refrigerator for a time), many feral cats, two white ducks who brought in wild ducks, a little kit fox, and so on. My life has been full of animals and children.The stories of Foxy and Bear are my way of sharing some of the things I have learned about animals and life.”