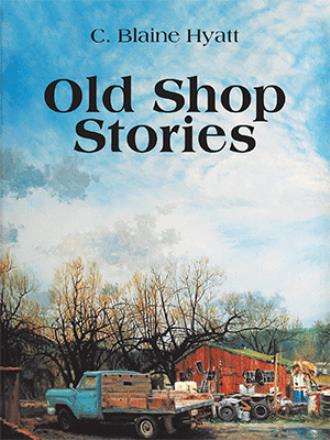 If only these walls could talk. As my memory goes back in time to my childhood and even into my young adulthood, I think of the countless hours spent in the old shop and the many stories that were told within those walls. The stories reveal the history and perspective of a culture, time and experiences of a people in our country that has all but disappeared. I had the opportunity of knowing and becoming part of that culture and those experiences through listening to story after story as they fell from the lips of my dad and his friends. They sat around the old pot-bellied stove and rehearsed experiences from their youth and young adulthood. My objective in recalling and writing these stories is an attempt to preserve an understanding of this culture as told by the men who lived the experiences… Dad and a friend had taken Dad’s truck and driven to Salina Utah to get a load of coal. There were a lot of coal mines around Salina, and the coal was a good quality. By going to the mine, the coal was cheap, so it made the trip worthwhile. Dad had a one-and-a-half-ton Ford truck, and after loading about six tons of coal, they started back to Parowan. Six tons is a big load for a one-and-a-half-ton truck, but doable. If the truck is running well, you have good tires, and you drive appropriately, there is no problem. I have hauled five to six tons on that size truck many, many times in my life without trouble. That day, Dad was feeling tired, so he let his friend drive home. They left Salina, heading toward Parowan on old Highway 89. The hum of the engine, the gentle whine of the transmission, along with the rhythmic rocking of the heavily loaded truck, lulled Dad into a state of half sleep. It did not take too long to reach the Sevier Canyon. As they entered the canyon and began to wind their way between the steep canyon walls, the truck began to climb toward the summit. The groan of the engine, shifting of the gears, and the gentle sway of the truck as it made its way around the sharp never-ending turns, climbing up towards the top, served to deepen Dad’s relaxation and lack of awareness as to anything that may have been going on. Mile after mile, higher and higher they went, the Sevier River being a close companion at times, then disappearing off into another part of the canyon. They passed Indian Petroglyphs carved in the rocks by some ancient people who had at one time roamed this elusive, forbidding, yet beautifully breath-taking canyon. Finally, they reached the summit of 8,000 feet. Topping the summit and starting down the other side, things were still going well. The road continues to wind down off the mountain, with the elevation dropping rapidly at seven, eight, and even nine percent grades. When you take a one-and-a-half-ton truckload, with six tons of coal, it will go down fast. That weight pushes hard, and you had better be in a low gear. Dad’s friend apparently did not understand this, because when he topped the summit, he shifted into fourth gear and began to use the brake to control the speed of the truck. That worked for a minute or two, but the truck was pushing hard, wanting to gain speed. The harder the truck pushed, the harder he pushed on the brake. Unbeknownst to him, the brakes were heating fast. In this kind of a situation, as I mentioned, it does not take long for the brakes to get extremely hot. Sure enough, the brakes went rubbery and lost their effectiveness. As the brakes began to fail, the truck began to gain speed. All Dad’s friend could do was push on the brake, which was doing no good, and try to steer the truck around the turns to keep it on the road, all while the truck continued to accelerate. It was not a good situation. Dad was jarred to full awareness by a strange vibration throughout the entire truck which sent a chill like a bolt of lightning up and down his spine. Upon becoming aware of the situation, he knew immediately what was going on. He knew something had to be done, and it had to be done now. There was no time to lose. He shouted, “Move over and let me drive,” as he raised himself high above the seat while at the same time taking hold of the steering wheel. By this time, the truck was vibrating furiously from end to end. The speed was increasing at an alarming rate. Dad’s friend slid across the seat under Dad as Dad slid under the steering wheel.

C. Blaine Hyatt spent hours in his father’s repair shop as a boy, listening to others tell fascinating stories. Fascinated by their strategies for navigating challenges—and the times in which they lived—he set about writing this collection of stories to preserve their collective history. One lesson he hopes readers will take away is that the things of this world do not matter in the big picture. No one cares what kind of car you have or what position you held. None of the things of this world that we often place so much value on matter much, if at all. When all is said and done, there are really only two things that last: What we have become and the legacy we leave—as in the effect, either good or bad, we have had on others. As you read these stories, the author hopes you will be aware that the water in your life is still flowing under your bridge. Take the time to become who and what you want to be and consider what legacy you will leave with others.

C. Blaine Hyatt, M.S., spent his adult life running a manufacturing business and also spent time in sales, as a farmer, in hypnotherapy, as a special education teacher, and as a coach in the public school system. He concluded his career as a professor at Fort Hays State University. He regularly gives presentations, conducts seminars, and publishes articles with his wife, Linda Lee Hyatt, Ph.D. They have four children, eleven grandchildren, and two great-grandsons.