When God Stepped In 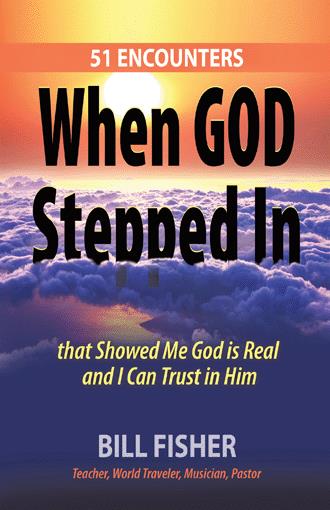 After a devastating car accident that killed his wife, Yvonne, and left author Bill Fisher severely wounded, he realized that this time, his life had just been spared from death for the ninth time. In When God Stepped In, Fisher shares how his life has been punctuated with a series of miraculous acts of the Lord. In this touching memoir, he narrates a series of encounters that have confirmed his faith in the power of God including healings, rescues, protection, shield, and provision. Fisher tells how God has allowed him to get into many unexpected, dangerous situations throughout his life and then has rescued him in often spectacular ways. This inspiring book for is for anyone who don’t want to live in doubt anymore, and who are also looking for God in messy places. Praise for When God Stepped In “It would seem almost impossible for all of these incidents to have taken place in the life of one man. However, I have known the author for many years, and they did!” —John Barkman, Pastor, Missionary, Christian Missionary Alliance

Bill Fisher, a Minneapolis native, earned a bachelor’s degree and two master’s degrees. Fisher has taught undergraduate and graduate courses at the university level and has traveled to Asia and Europe on mission projects. He is a public performing and recording piano artist who is widowed and has three grown children.