I'm Not Crazy; I'm a Christian

Tales From the Frontline 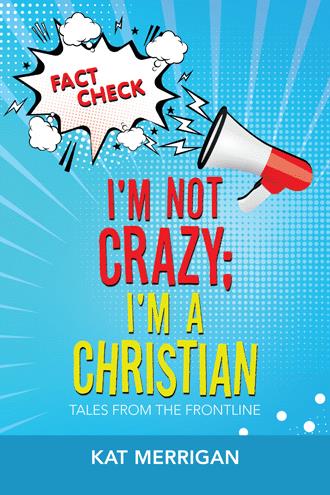 CHAPTER 2 Left My Halo At The Cleaners I started this chapter with a bit of whimsy for the title. Clearly, I do NOT own a halo, and even if I did, I wouldn’t trust anyone to keep it sparkly and smudge-free besides me. I DO, however, own a magic wand, but that is only to be used in extreme emergencies. And I may have a tiara or two. See, we’re already starting off a bit lighter in this chapter. Now I’m counting on you to keep me there. Don’t let me down. I think there is a huge misconception that Christian=perfect. This idea is often perpetuated not only by people outside of the faith, but sadly, from those within it. I think this idea has led to a great deal of hurt within and outside of the church. Someone who isn’t a Christian may feel intimidated by “church folk” because they seem to have it all together on the surface. They show up in beautiful clothes, kids all in line, husband and wife smiling, and everything is perfect. Someone who is struggling with finances or relationships or any of 10,000 things can look at these families and think, “I’ll never be like them. This isn’t for me.” Well, I’m here to let you in on a well-kept secret. Spoiler alert: NO ONE HAS IT ALL TOGETHER! That family that looks like it came right out of a magazine? Well, the Dad is about to lose his job, the Mom is on pills, and the two kids were just recently caught trying to vandalize the school’s gym. Mom and Dad haven’t been close for over six years and are just staying together for the children. The kids can’t stand either parent and just wish their folks would get divorced already because at least there might be some peace in their lives again. When the reality of a Christian’s life becomes public knowledge, especially someone in a position of authority and influence, everyone loses their minds! A prominent pastor gets caught in a scandal and the world is shocked and can’t wait to tear down whatever good things he/she did. It’s all thrown into question. Everything becomes tainted by that mistake. Everything becomes a lie. Now I am not excusing any inappropriate/criminal behavior by any means. I find it just as appalling/upsetting as the next person when anyone takes advantage of a position of power. My point is that we need to stop being surprised when people make these mistakes. And, perhaps, if we understood what a Christian really is, we wouldn’t be so shocked the next time one acts just like everybody else. So, I’m going to start by being real. I’m going to list a few areas in my life that you may or may not find very “Christian-like”. I’m not necessarily going to explain/justify them, but I’m going to state them because, maybe you’ll begin to realize that the major difference between a Christian and someone who isn’t, is that the Christian knows how much help they need in life, and they’ve found the One who will help. Listed below, in no particular order, are several behaviors of mine that I thought might trigger the “And she calls herself a Christian??” response. I’m fairly certain I’ll get criticism from both Christians and others, and I’m willing to take that chance. Let the judging begin! I do enjoy wine or cocktails. Now let me state upfront that I am not advocating drinking. I’m just telling you that yes, I do enjoy a drink or two from time to time. It is an area that I have to be careful about as it can become a slippery slope. One glass of wine in the evening can easily become two or three and the next thing you know you’re going through a bottle a night. The Bible is clear about being sober-minded. Drinking to excess is never a smart choice. We all know nothing good happens after 2 a.m. or after consuming a lot of alcohol, or a combination of the two. But the fact that I do drink a little is real. It doesn’t mean that I don’t love God or that I’m not a Christian. It just means I’m not perfect. I cuss more than I should. As a Christian, we’re really not supposed to curse/swear. Taking God’s name in vain is a big no-no. Gratefully, I have gotten better with that. But I do still swear. I realize I put “more than I should” as if there was an acceptable amount of cursing and I’m just slightly over it. Not the case. Moving on. I wish I didn’t curse, and I’ve certainly tried to censor my language around children and in certain situations. But the fact remains that as of right now, I still curse. And I’m still a Christian. And I’m still not perfect. I have never been married, but I’ve had long-term relationships. This is my delicate way of stating that I’m not brimming with purity. In recent years, I have recommitted to a more Christian-based approach to dating, but there were many years when I didn’t. I could go into how I wish I had stayed pure, but that’s a topic for a different time. Suffice it to say that when I stopped engaging in sexual relationships, my life improved, my self-esteem soared, and things just got a whole lot less complicated. I do believe in love and marriage, but I will not judge others for their choices. Hopefully, you’re not judging me for mine. But whether I was involved with someone or not, I was still a Christian and still not perfect.

Kat Merrigan debunks and demystifies preconceived notions about what being a Christian is all about in this book. It poses questions such as: • If you’ve ever doubted God has a sense of humor, have you considered a penguin or a duck-billed platypus? • How do you determine who you really are? • Does being a Christian mean giving up everything? Her goal is to help bring clarity to what it means to follow the Lord and encourage readers to do some investigating of their own. Written from the viewpoint of someone who has been a dedicated Christian for more than twenty-five years, it is an honest, sometimes raw and emotional, but always sincere and hopeful exploration. There are many humorous stories and anecdotes throughout as the author takes the reader along on her journey. Kat also celebrates those that have made a huge difference in her life, such as her sister-in-law, who stood by her side for more than thirty years. She was the one who demonstrated a consistent devotion and dedication to faith, which challenged the author to follow in her footsteps. Faith is a serious commitment and shouldn’t be taken lightly, but it can also be where you find peace, joy, and even hope. All of those things should leave you with a smile on your face!

Kat Merrigan was born and raised in New York. She earned a bachelor’s degree in business administration and spent twenty years in the marketing field creating successful print and multimedia advertising campaigns for various corporations. Having grown weary of the business world, she went back to school, earned an associate degree in applied science, and is currently a licensed physical therapist assistant. Kat has spent her life writing, whether it was for campaigns, company newsletters, or skits, sketches and plays for various local productions. If all the world’s a stage, Kat spends a great deal of time there. As a member of a church choir she was able to boast that she performed from Radio City Music Hall to Ryker’s Island, as well as Long Island’s famous Jones Beach. Her most recent project was Kat and Andee Far From Normal, a hope-filled, humorous podcast that she started with a close friend as a reaction to all the changes of 2020. Kat realizes that life is challenging which is why she decided a long time ago to not take herself too seriously. She is a firm believer in finding humor at all times, especially when it seems in short supply. Comedy with a side of sarcastic wit is her favorite dish. When one of her nephews was little he proudly labeled her the “funny channel.” What sustains Kat through the hard times is her faith. For the past twenty-six years, she has been a dedicated Christian. Her greatest desire is that her gifts of writing and humor will be a blessing and help inspire others.