The Gospel of "It's a Wonderful Life"

A Spiritual Journey Through the Movie 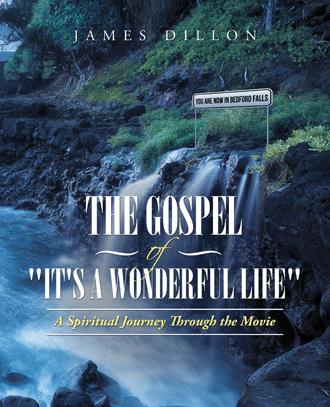 By the end of the movie, George is having a semi-wonderful life with a lingering regret for the better life he thinks he has missed. For George, his life seemed to have happen to him; he fell into it and had to go along with it. So when unexpected events occur that seem to prove Potter right and his father wrong, George looks back on everything in his life and realizes he was a failure and a victim of his own bad decisions. The darkness of Potter's view of life has been confirmed and has blotted out George's ability to see the story of how the love he has given has grown in his community as a result of him staying true to his father and by extension, God, the Father. Reaching the end of his rope and thinking that money was the cause of his failure and the answer to his despair, he turned to Potter for help and received only accusations and condemnation. Finally, out of desperation at Martini’s bar, he pleads to God, the Father, to show him a way of this dark abyss. When the husband of his young daughter’s teacher overhears him, he punches George in retaliation for insulting his wife. As George recovers from the blow, he interprets it as a sign that his prayers are neither heard nor answered; this convinces George, that Potter's conclusion that a life is measured only by money, is correct. George agrees with Potter that he is worth more dead than he is alive. He decides to throw his life away. All the while, however, his prayers, unbeknownst to him, are being answered by the love of God coming to his aid via his family and friends and eventually by an angel, Clarence. Clarence allows him to see what Bedford Falls would be like without him. George needed to witness with his own eyes how a life without money compared to a life without love. Life without money, but with love, can be endured with hope and faith. A life without love becomes a desperate nightmare, a living hell. Clarence’s gift to George allows him to see this difference. He couldn't be grateful for the life of love he had until he witnessed the absence of love in life. Once the love of God, that he helped to spread, became visible to him, he became grateful for the gift of life even with its imperfections. His immediate reaction to this epiphany was to run home proclaiming Merry Christmas throughout the town while knowing that the authorities were waiting there to take him to jail. That didn't matter now that he knew that God's love was incarnate in the world. This wonderful life, despite hardship and struggle, was always there even in his darkest moments. George was unable to see the true nature of his life and its value. This blind spot was essentially the missing piece of the puzzle of his life. George was, like all of us, a work in progress, continually being revised and perfected by Holy Spirit, God's grace and love active in the world. Like God did with St. Paul, whose eyes were opened to the light of the truth that was always there, God stepped in dramatically to open George’s eyes-and that did make all the difference for him. Potter, representing evil in the world, became inconsequential in a world full of love. He was sealed in his own office unable to respond to the proclamation of Merry Christmas uttered by the man he wanted to condemn. Potter kept the money he stole and didn't need; it was more than replaced by the money that flowed out of the love and appreciation of the people of Bedford Falls for the sacrifices of George Bailey. Potter, by his own choosing, remained oblivious to the joy of love incarnate. Potter ignored the invitation to celebrate Christmas. When his nightmare journey through Pottersville was over and George returned to Bedford Falls, the only thing that changed was George's vision-he could see what had always been there: God's love. The money was still missing and the authorities were waiting to take him away, but that no longer mattered to him. He finally realized that the life he co-created with his family and community; a shared life, filled with God's love and grace was waiting at home for him. George had finally accepted his journey and saw the wonder of his life that began in love, continued in love and ended in love. This is George's story and it is also our story; it's the eternal story of God's love for us ever present in our lives. Although George might have needed many course corrections (provided by the Holy Spirit), he realized how his story was aligned with the life story God has given to us - the life of Jesus Christ. George followed that story and we are called to follow it too.

“It’s a Wonderful Life” has become an important holiday tradition for families.

But why does the movie have such a profound effect on people and what are its major themes?

James Dillon answers those questions by highlighting the movie’s recurring motifs and themes. As someone who has walked a similar path to George Bailey, he’s the perfect person to tell this story and share life lessons such as:

• Sometimes, miracles simply involve looking at things differently.
• Viewing the movie through a lens of spiritual faith can be a productive way to move closer to the Lord.
• George’s life is a journey and a struggle to discover what was there from the beginning, what was always with him even in times of darkness, and what would be there at the end: God’s love.

The author also explores the background and context of the movie’s origins, the life of its director, Frank Capra, and its place in our culture. Suggestions to facilitate small group discussions are included.

Take a spiritual journey and reflect on your faith and purpose with The Gospel of “It’s a Wonderful Life.”

James Dillon has been an educator for more than forty years, including twenty years of service as a school administrator. He is also the author of The Peaceful School Bus (Hazelden, 2008), No Place for Bullying: Leadership for Schools that Care for Every Student (Corwin, 2012), Reframing Bullying Prevention to Build Stronger School Communities (Corwin, 2015), Marching with Dr. King (Createspace, 2017), the children’s picture book Okay Kevin (Jessica Kingsley Publishers, 2017) and Using Stories for Professional Development: 35 Tales to Promote Reflection and Discussion (Routledge, 2020). He is an educational consultant for Measurement Incorporated, which sponsors the Center for Leadership and Bullying Prevention. He lives in Niskayuna, New York, with his wife, Louisa.