Blayne Winkle and the Mysterious Scroll 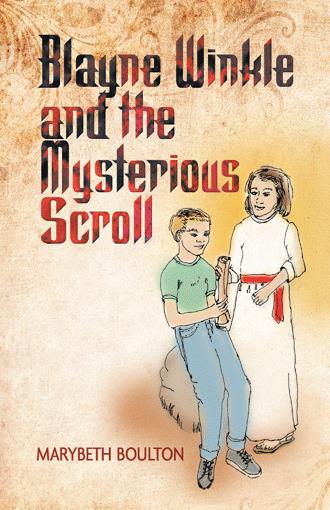 Rebecca was immediately wheeled into the Operating Room, where Dr. Kase and Dr. Childs were prepped and waiting for her in their white coats and masks. They quickly called for their instruments and carefully lifted and cleaned the newborn baby. Well aware of Blayne’s unusual heart condition they had cleverly designed a light wire cast and a moldable, lightweight and durable plastic covering to enclose and protect the baby’s heart. It was carefully fitted onto his chest. Soon he was swaddled in a warm blanket. Cradled in mother’s arm, he was resting quietly. ********************* After monitoring Mrs. Winkle, the doctors determined she was ready for the recovery room. Blayne’s father was called to unite with his wife and newborn son. He gently picked him up and looked at Rebecca. “We’ll name him Blayne to reflect the family name.” Although the pre X-rays revealed the condition of the heart, it had been heartrending for them as they lovingly looked at their son. Tears were gently falling on their faces. How could they not be shocked as they realized the reality of the heart encased in the wire mesh covering and more medical procedures? How could Blayne live a normal life? What would this mean for the family? ******************* An only child, he was born late in the lives of Rebecca and Daniel Winkle. They were thrilled and happy on December 25, when their little boy arrived. They’d looked forward to his birth, in spite of what the sonogram had revealed. **************** For Blayne, the facts stretched back telling the story of what he’d been living with for thirteen years. Other surgeries followed, but he was still wearing the cast, his armor. This cast—that’s what it’s about. With a deep groaning sigh, his right arm quickly crossed his chest and his fingers gently cupped the cast, feeling the rhythm of his still exposed heart. In a barely audible voice, “My cast. My story. My destiny.” ***************** Remembering the day he found his special Abraham Rock, a smile broke across his face. Mom and he were walking Sam, his special puppy given to him by Grandpa Caleb when he was seven. The little spotted Springer Spaniel dog was playful and loved retrieving whatever was thrown his way. Blayne had thrown a small ball up on the riverbanks for Sam to chase. The ball bounced and landed by a big, rough rock a few yards from the river’s edge. It stood alone, it’s unique shape commanding attention. Blayne’s curiosity spurred him to examine it. . ******************** A perfect day to be at the river! He fastened his gaze on the fluffy clouds floating through the blue sky, delicate and peaceful. Ripples of peace were flowing, providing a serenity unknown to him. With that came a new understanding and a feeling of acceptance of his situation. Saturated with that acceptance his awareness became heightened. His senses picked up an aliveness. A whisper in the wind. A mystery blowing in the air. What’s happening? A bright flash of light far in the distance caught his attention. A slight breeze, ever so gently streaked across his cheek. ******************* He watched in fascination as a light followed the river bank and continued to come his way. Now he could identify it as a person. ******************** The visitor approached. Tall and slender he wore a purple robe with a golden sash tied at the waist, sandals on his feet, eyes blazing. This strange visitor, bright like the sun, had to be from a different realm. Blayne knew a ‘Once in a lifetime’ occurrence was happening. He heard a deep, calming voice. “Hello there, young man! The Lord has heard your prayers and has a message for you.” Blayne was overcome, but the presentation and voice gave him a safe feeling. Curiosity got the best of him. He blurted, “Who are you? Your face is bright as the sun and your clothes are different.” “My name is Yesh,” he said extending his hand to Blayne. ******************** “This is your special rock, isn’t it? You’ve sat there many times praying for an understanding of your destiny.” Yesh put his hand on Blayne’s shoulder, “That’s why He sent this scroll. It will answer some questions.” The scroll, rolled up and tied with a braided red cord with a key at the end, communicated a sense of privilege. Blayne unrolled the scroll to look at it, but the mysterious visitor was gone. “Yesh! I have questions.” He looked back at the scroll in his hands and wondered if he could even read it. Strange looking wheels were scattered among the unusual marks, letters in a language he didn’t recognize. He could see a faint cross off to the right. The scroll was made of parchment with a ruffled edge. Earmarking the corners, there was a picture of an animal in each corner. He tried to remember where he’d seen the pictures of a lion, an ox, and an eagle. In the lower left hand corner was a torn picture of the Face of a Man. ****************** A few night’s after Blayne’s encounter with Yesh he experienced a spectacular dream with flashing zig-zagging lightning and loud thunder claps. A stormy wind blew in with continuous flashes of light and wheels with penetrating eyes on their gleaming beryl-colored rims. Upon awakening, he realized the designs in his dream matched the pictures from the scroll and brought fresh insight. In the midst of the lightning were the unusual wheels with eyes glowing like hot amber metal. Blayne saw four living creatures with wings sitting on four wheels like those in the corners of the scroll. With a shiver of fright and feelings of apprehension, he wondered what they might do. Even though dreaming he knew he was seeing what the Bible described. “The four faces on each creature were the Face of a Man on the forward part, the face of a lion on the right, the face of an ox on the left, and the face of an eagle on the back side.”

Blayne Winkle was born with his heart exposed, meaning a future with doctors, surgeries, and curtailed activities. Although challenged by his disability, he has exciting adventures with his friends and dog. You will anticipate each episode, sometimes it’s nip and tuck. Blayne enjoys going to his special rock by the river where he sits, relaxes, and gathers his thoughts. One day he’s approached by a stranger in a robe of ancient style. Surrounded by brilliant light Yesh delivers a scroll telling him he’s chosen for extraordinary reasons. He can call for help from four living creatures, pictured in the corners of this scroll. Revealed are the Face of a Man, a lion, an eagle, and an ox on whirring wheels. Journey with Blayne on exciting and sometimes dangerous adventures for him and his friends to solve…by themselves, with Yesh, or the living creatures. You’ll have front row seats to struggles with the Crystal Crowd, Luke’s escape, a spooky, dilapidated house, strange attacks on his dog and dealing with his nemesis, Ian. Blayne prays for insight. Experience his challenges!

MaryBeth, the youngest of five, grew up in Ellsworth, Iowa in a small farming community. She graduated from Cottey College in Missouri and later from BGSU with a degree in education, using her training to teach at many different levels and in several states. She received the Young Educator Award while in Tennessee. She’s blessed with five children and seven grandchildren. She was a sports reporter in high school and later had a short piece published in Parent’s Magazine. Eventually, an overwhelming urge to write a young adult Christian book formed, emphasizing the Lord can use anyone who’s willing. Ideas came quickly and Blayne took on a world of his own. MaryBeth earned a Master of Ministry and resides in Medina, Ohio.