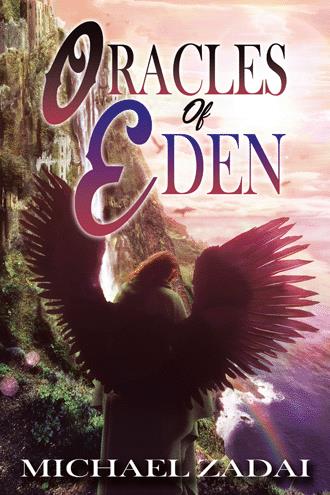 Deep within the recesses of measureless space, among a myriad of outlying stars, the Nucleus Orb, through gravity and motion, sustained the cosmos in totality. There, in the Land of Ever Loving and Being Loved, the Image Maker resided. It had long been said that His radiant countenance brought about daylight’s warmth, and expressions of rest at eventide came with the blink of His eye. The green leaves of the harvest had never known wither from summer’s scorching heat, and autumnal leaves never fell from trees to foul the ground with decay. Winter winds, all frigid and scathing, were thereby prohibited reach, while springtime remained in perpetual bloom. Yet, far to the North, the Emerald Mountains, jutting into skies of cobalt blue, allowed snow to settle in dusty banks upon their wizened peaks. Auroras of green, trimmed in scarlet flame, topped the snow-capped heights. Abba, Philon, and Life Weaver, entertained by purest beauty, looked on from a distance, discussing the forthcoming creation of the Chayil, while in the Valley of Zoë, a celestial city lay unoccupied, awaiting the arrival of its citizenry. “I am concerned for Raeh,” Philon confided. “He wrestles so. His eyes reveal the conflicts of a troubled soul, and discontentment leaves him always reaching.” “Yes,” agreed Abba, “but shall conflicts of the heart stay the blessings of our hand? To disallow Raeh’s wrestling would be to tamper with his freedom. In remaining true to the creatures, we have given life, we must allow them all to choose, though in doing so we take love’s greatest risk.” “Should he find the grace bestowed, a gift too great to bear,” added Life Weaver, “he need only draw strength from the inclusion which that same grace affords. For only within shared life will he find completion’s rest.” They passed through one another in transparent unity, melding into the essential community of One, which was the Image Maker. Ablaze with creative power, they burst into blue and white flames. Whirring and whirling, a high vortex formed, and a host of winged beings strode from it in processional pageantry. They were dressed in white linen tunics, and their hair, in autumn hues, shimmered with newness of life. These were the Valiant Ones, the Image Maker’s Chayil! At last there emerged one tall and sleek, skin glistening bronze. Long ebony hair framed his chiseled face, and ornamental gems adorned his vested chest. Raeh—for it was Raeh—spread his wings to the fullness of their glorious expanse and lifted himself high above the others. The shining throng marveled at his magnificence. He hovered over them thinking, I knew I was destined for greatness! The vortex subsided, and Abba, Philon, and Life Weaver stood together. Abba called to Raeh, who came down like a shooting star to present himself before them. “Here,” announced Abba, “you are Conductor of Music, Singer of Songs, Star of the Morning! Raeh, behold your choir!” Raeh turned toward the thousands, who under his direction, lifted their voices in vigorous song as if they had always done so. The chorus rang out in the highest heavens, proclaiming the wonders of the Image Maker—its harmonies clear as a cloudless morning and crisp as a winter’s night. A preview of your book is placed on our website to give customers a sample of your work.

Inhabiting the universe of the Silver Sea are the Destiners: able-bodied, eagle-like beings that are swift of sword and wing. One day Raeh, having a predilection for danger, flies into the forbidden zone where a magnetic force overtakes him and pulls him into a portal. He is spit from the portal’s end into a magical jungle, where he glimpses the Image Maker. Raeh returns to the Silver Sea with an unquenchable yearning for power. Persuasive and ambitious, he wins the allegiance of many of the Chayil, the Image Maker’s angelic host, and incites a rebellion. A torrid upheaval ensues, befouling the heavens with angelic blood while Raeh increases in power. Valerian and Aurea, the first born of the Image Maker on a new planet, dwell contently in the Garden of Delights, but their hearts will soon be tested. So begins a journey in which all the Image Maker’s created beings will discover the immense power of choice and its inevitable consequences.

Michael Zadai is an author, singer-songwriter, and photographer. He utilizes all these gifts to weave a tale that leads readers on a journey of discovering their true purpose and that they are, indeed, fashioned in the image of the One who created everything.