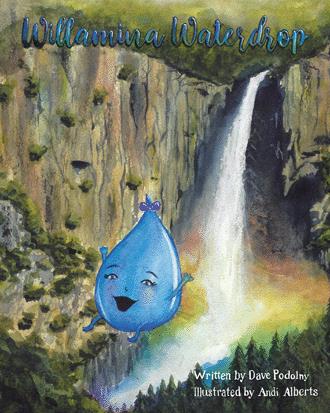 The days passed pleasantly as Willamina glided along with the bubbles, but she could tell she was moving faster now, and she wondered where she might be going. Then one morning, as the first pink light of dawn peeked over the pine trees of the ancient forest, Willamina heard a faint rumble. It was low at first, sort of like the snoring of a grizzly bear deep in his cave asleep for the winter. Willamina noticed her river had gotten deeper and narrower, and the rumble was slowly becoming a roar like the passing of a freight train speeding over a trestle at midnight. The banks of her river had grown steep, and rocky, forming a deep canyon. Up ahead she could see white mist beginning to rise into the air. And as the sun’s rays streamed down into the canyon, and passed through the rising, swirling mist, they formed the beautiful arc of a rainbow, like a brightly colored bridge over the river. The roaring grew closer, and then Willamina’s world suddenly began to tumble and spin. She was in some rapids, plunging down into deep troughs, and soaring up mountainous waves, as the water boiled and churned into bubbly, white foam. It was all she could do to keep herself on the surface. Then, just when she thought her ears would pop from the noise, the river below her fell suddenly away and she was falling. She tumbled, nearly weightless, through the air. Then she landed with a plop and sank deep into the dark, blue pool beneath the ancient waterfall over which she hand just ridden without the benefit of a barrel.

A happy, little watter drop, by the incredible power of wind, weather and the water cycle makes a fascinating journey across the country. On her trip she encounters the grandeur of America’s rivers, oceans, valleys, mountains, canyons and cities.

About the Author Dave Podolny is a retired United States Air Force and airline pilot with over 17,000 flight hours. He and his wife call Cleveland, Ohio home. They have three children and seven grandchildren. This is Dave’s first book. In his spare time he likes to volunteer with Habitat for Humanity and as a Stephen’s Minister at a local hospital. He enjoys walking and biking in the parks near his home, and hopes to spend more time traveling as a passenger to places yet unseen in the United States and visiting his children and grandchildren scattered across the country. About the Illustrator Andi Alberts is a career nanny living with her husband in Richmond, VA. Inspired by her artist grandma, she dove into watercolor in 2016 and hasn't come up for air since. This is her second time illustrating a children's book, and hopefully not the last!