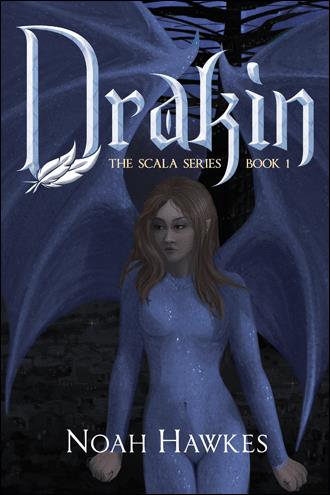 How is this possible? Scala don’t move from one host to another, Ellie thought as she looked at a small collection of Scala attached to her fingernail. “Hello there,” she said, cooing to the scales. The Scala shivered at the attention of its host. “You seem responsive—can you hear my thoughts?” she asked aloud. The Scala just continued to settle and shiver. “This must have been an ordeal for you, too… I hope you’re okay now,” she mused, observing the amount of Scala covering her skin. She looked down her hand to her arm and saw the individual scales continue to move up and down and quiver before settling into place. It’s as if each one had a place they claimed, and they kept shifting until they got to the spot they’d chosen for themselves. As the last scale left the woman’s body, Ellie pulled her hand back and touched her other arm. Even though her hand was covered in her new silver Scala, she felt her arm like she was touching exposed flesh. She felt the tickle of her Scala-covered finger against the stiff scales on her arm and found that the sensation of touch was passed through the scales, just like before. That was when she realized this Scala was not just on her temporarily for survival—they were now her Scala, connected to her on a deep level. She fixated again on her hand, wanting to see her skin. Instantly, the scales responded and shifted as they crawled back, showing the skin beneath. The scales continued until her hand was exposed. Marveling, she opened and closed her naked hand. Looking at her arm, she thought the same thing, and the scales again shifted up to her shoulder and redistributed along her chest and back, thickening in areas. With a simple thought, the silver scales pulled away from her other hand and arm. She looked back at her wings and found them covered in Scala as well. She flapped them tentatively, and the scales held tight against her flesh, moving as her skin did. She mentally pulled the scales back from her wings—a wave of movement tickled her as each Scala redistributed around her body. Ellie suddenly felt the chill of the dark cavern on her exposed skin. She was amazed—the Scala were responding to her thoughts and desires! She had heard of Mature Avians that could manipulate or even communicate with their Scala, but that took years, perhaps hundreds, of intense training and practice to accomplish Scala mastery. Wondering what would happen, she mentally gathered the scales up her neck and around her face. The Scala clustered around her head, and small scales spread up, gently gripping her lips and nose then covering her pointed ears. The small scales layered on the firm folds in her ear all the way to the opening. Now, the Scala covered her entire body. Ellie reached a hand to the top of her head and noticed the Scala had pulled her hair down flat against her skin—not a strand could be felt through the locked scales. Ellie wondered how much protection the scales could provide. She knew Scala could harden; many times in her youth, she’d tapped a scale with a rock or a stick, prodding it to move. But seeing a community of scales like this collected and locked—they almost seemed impregnable. She spread out her gray wings and flapped them, feeling them catch on the air. Unbelievable—her wings felt lighter, and it seemed as though her Scala had added stability and strength. She’d heard stories of Mature Avians with substantial strength that could level hundreds of Fledge troops; perhaps it was their Scala that amplified this strength. She reflected on her own Scala as she lifted her arms up and down. The scales pulled back from her head and collected around her neck. They must be reading my unconscious mind, not just my active thoughts or emotions, she considered. I wonder… Experimenting, she gathered some scales to her palm. They continued stacking and rearranging themselves into the design she pictured in her head. After a few seconds, she was holding a long, smooth staff in both hands. Then, she shifted it into a double-handled longsword. The scales interlocked perfectly until they were smooth on the surface of the blade; the edges looked razor sharp. She gripped the two-handed pummel tightly in one hand as the cross guard formed, curved backward, and met the scales back into her hand. She swung the blade back and forth, cutting the air. She was surprised by how light the sword was, and as she touched the end of the blade to a rock, she could actually feel the smooth surface of the stone through the Scala sword tip, as if she were touching it with her own finger. She tapped the blade against the rock, testing the feel. Tap, tap, tap—the sensations passed up her arm and registered in her brain. She tapped the rock a little harder, almost worried she was going to hurt the Scala not directly attached to her skin. Not feeling any pain, she hit the rock a little harder. Scala do transmit pain, so they must not be feeling any, she reasoned. She swung the blade hard and hit it against the rock, driving the sword an inch into the stone. Ellie felt a shock of sensation go up her arm to her shoulder. The sensation wasn’t painful; it felt like someone had hit her softly with a stick. She reeled at the damage she’d done to the stone with just a casual swing. Dislodging the blade from the rock, she touched the sharp point on the edge of the deep cut, feeling its edges. Smiling, she recalled the weapon, and the scales reformed back down around her hand and up her arm. The individual scales quivered as they reset back into an available spot.

The Avian Empire is locked in an endless war that has claimed the lives of countless Fledge men and women. Their mindless enemy is inexhaustible. There is no option for peace, the monsters can’t be reasoned with and they will never stop. Most in Avian society never get a chance to mature and grow their white feathered wings and take to the skies. Most never get to master communication with their Scala, the semi sentient scales that cover their body. Fledges are raised to serve a purpose of preservation or die in the depths. Ellie, a young Avian Fledge living on the Plymouth Plateau, startles awake from a reoccurring dream—one where she suddenly grows wings and takes to the skies. As an Avian Fledge, Ellie struggles to thrive in her harsh society—one where women are treated like cattle and where the Fledges constantly fear their mysterious rulers, the Mature Avians. Destined to repeat the life of her Mother and countless other fledge women. Ellie will embark on a journey in which she will gain tremendous power and suffer incredible loss. She will battle the balance of what it means to be a monster or a savior. With this unexpected power, she will soar to new heights and change the world. Whether that change is for good or evil, will depend on her belief that the world she has known is worth saving or should be changed forever.

Noah Hawkes the 9th of 10 children, was born in San Antonio, Texas in 1982. His father Thomas was a world-renowned surgeon and his mother Ethel was an amazing homemaker. Born into a military family, Noah grew up traveling the world. At a young age, Noah was fascinated with science, culture and how the world worked. His teachers would often say he was lost in a world of his own imagination. By the age of 12, Noah was writing short stories he called, Captains Logs that recounted the daily adventures of a Starship captain lost in space. Noah loves fantasy books and has been inspired by the worlds created by Tolkien, Sanderson, Goodkind, and Card. Noah is always reading a new fantasy series.

In 1997 Noah's life was rocked by the loss of his father and later his older brother. He struggled with his mother and family to move on with their lives and live with tremendous loss and heartbreak. Noah developed a special relationship with his mother, and she continues to be one of his biggest supporters and sources of inspiration for him to this day.

Noah married his beautiful wife and the love of his life in 2003. They have 3 boys, Elijah, Ethan, and Ender. After finishing his MBA in 2012, he started planning his first novel. It wasn't until 2014 when a good friend and fellow author Stephen Thorpe shared his completed manuscript for review, that Noah took on the challenge and began writing Drakin: The Scala Series Book 1. Since then Noah has found a passion for writing and continues planning and writing his stories on a daily basis.