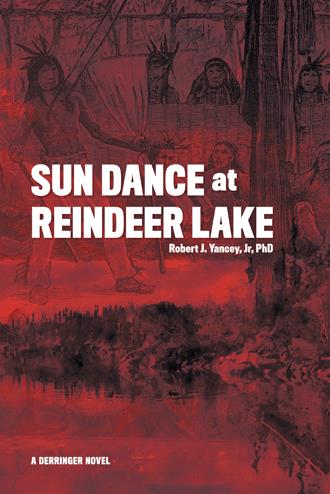 : After a good morning of fishing, Oliver, Terry and I met up with two other boats at Malcolm Island which is about 30 miles north of Moose Bay. We pulled our boats up on the rocky shore and Terry and I helped Oliver unload his lunch preparation box and the fish cooler. The three guides - Oliver, Andy and Kevin – then begin their lunch preparations. Oliver launched into cleaning the first of several fish from the morning’s catch, while Kevin started cutting up potatoes and onions for the hash browns he would prepare. Andy was in charge of the fire. A few of us helped with the fire by gathering the driest wood we could find. Nonetheless, the wood was pretty soggy since it was had been raining lightly for over 8 hours on this part of the lake. We found plenty of fallen wood branches slightly inland from the shore. We broke the branches by hand or cut them up with the hatchets that Andy had provided and we stacked the wood in a large pile. Andy laid two large logs parallel to each other between some large rocks which had been used previously for a campfire. We watched as Andy walked over to several of the larger pine trees and gathered dried branches from the sides of the trees. He said, “They call these fire ladder branches. During a forest fire these branches serve as a ladder for the fire to climb up the tree.” He then rolled the ends of the dry branches in pine-pitch which was flowing from the sides of many of the trees. Andy also gathered dry pine needles from some of the sheltered branches of the trees. With the pine needles as the base, he laid the pine pitch coated branches over them in between the two large logs. He then built a small tepee-like structure from several of the additional smaller but wetter branches that we had gathered. He lighted the pine needles with a match that he had taken from a water-tight match tube that he carried. He gently blew on the needles to catch them on fire. The fire then spread to the pine-pitch covered ladder branches. Once these branches caught fire the small tepee began to burn. Andy had a nice flame going within a couple of minutes and he started adding the larger fire wood. The fire popped and smoked because of the moisture and the pine tar in the conifer wood, but within a few minutes Andy had a roaring fire going. The heat from the fire felt good. Most of the fisherman gathered round for the warmth on this cool, rainy day. Andy said, “While this method of using nature’s tools on a rainy day takes a little longer than Oliver’s favorite method, we don’t have to wait for the gasoline fumes to burn off.” Oliver just shook his head, turned his new yellow-green baseball cap around and said, “Purist.” Charley, Terry, Jim and I wandered over to watch Oliver clean the pike. Northern pike have a mucous layer on them which protects their skin and which also which makes them slippery to hold while cleaning. Some fisherman use a glove when filleting pike, but Oliver cleaned them bare handed. He said, “The slime washes off your hands. They are easier for me to hold this way.” Oliver reminded us, “To filet a fish you need a really sharp knife.” He pulled out a whetstone from his old plywood preparation box and stroked the blade of his bone-handled fileting knife over it several times to re-sharpen it. We watched as he began to clean another fish. He cut off the two center bottom fins, made an incision down to the backbone around the gills, and cut along the bottom center line to make two even fillets from the fish. He turned the fish around with the back of the fish facing him and then ran the filleting knife along the ribs from the head to the tail, removing the fillet from the ribs and carcass. We could hear the knife clicking along the ribs as he made his separating cut. Oliver flipped the fish over and did the same on the other side. He next cut out the Y-bones from the top of the fillet. Oliver told us, “Use the center line in the fillet to locate the edge of the Y-bone. See it there? Simply run the knife along the bones toward the top of the fillet where the backbone was and pull the Y-bones away for the fillet. Lift out the Y-bone section like this. Notice that very little meat is lost from the fillet.” After removing the Y-bones from the fillet, he then removed the skin by running the knife between the skin and the muscle. He placed the fillet in a plastic bag filled with a spiced corn-meal flour mixture which the camp cooks had provided. Oliver asked Jim if he wanted to try his skills at this process. Jim said, “Sure!” From his prep box, Oliver pulled out another cutting board and filleting knife. After sharpening their knives, Oliver and Jim set to work fileting the rest of the northern pike in our box. Oliver then asked Andy to bring him some fish from the other coolers so that everyone would have enough to eat. I just shook my head and whispered to Charley, “Oliver just pulled the old Tom Sawyer, ‘white-wash-the-fence’ ploy. It works every time. I would watch for bones in the Jim-Bob cleaned fish if I were you. The boy is not yet a professional.” Charley chuckled and asked, “How did you guys do this morning? Jim caught a 47 inch long, twenty-five pounder. We caught two more fish over 40 inches long.”

Dr. Bob Thompson and three friends from Michigan travel to Moose Bay Lodge on Reindeer Lake in northern Saskatchewan, Canada, to fish for big northern pike and lake trout, having no idea they’re about to get caught up in a murder mystery. The friends are assigned a First Nations Cree Indian fishing guide, Oliver Bear, who Thompson knows from previous trips to the lodge. Oliver leads them to the big fish. Oliver has also discovered the location of a valuable secret on the lake – and he is cruelly tortured and murdered in a Sun Dance ceremony to reveal that secret. The First Nations warrior says nothing, forcing whoever killed him to find some other means to find what they seek. Knowing that Thompson has assisted law enforcement agencies to solve and prosecute murder cases in Connecticut and Michigan, the Royal Canadian Mounted Police ask him to assist in the case. Working with Canadian authorities, Thompson makes it his mission to find out what happened to Oliver and bring his killer – or killers – to justice.

Dr. Robert John Yancey was born in Austin, Texas. He received his PhD from the University of Texas at Austin in human medical microbiology. After graduating, Bob spent three years in postdoctoral positions at the University of Texas Southwestern Medical School at Dallas and the University of Missouri Medical School at Columbia. He joined The Upjohn Company in Kalamazoo, Michigan, in 1980. After working in the pharmaceutical industry for more than thirty years, he retired in 2012 to become a novelist and scientific consultant. Bob is the author of more than eighty-five publications in refereed scientific journals and books, author on more than 150 presentations at national and international meetings, and inventor on seven patents. He currently lives with his golden retriever, Sadie, at his house on Fine Lake in southwest Michigan.