A Night on Kingwood 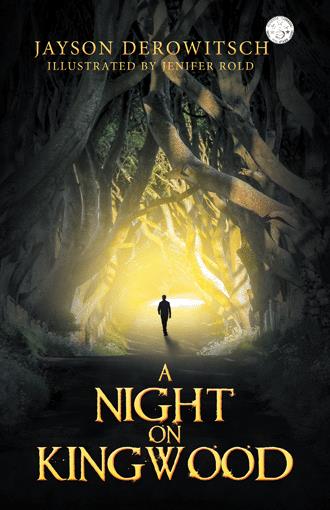 Kyle’s heart felt like it was about to leap out of his chest. His adrenaline was pumping full blast, and he was covering ground like a true-to-form Olympian. He made it around the first bend in the road. Swish, swish, swish. The sound of Leviathan chasing him was getting louder and louder. He couldn’t tell how close the snake was, and he was too afraid to look back. He passed Lowen Street and knew that the next one was Engel. Swish, swish. The sound was louder than ever, and Kyle’s anxiety was at a dangerous level. Nevertheless, he would trust in the Wind Voice; he would trust in the way of Batach and Aman. He kept running with everything he had in him until he could see Engel Street dead ahead.

Swish, swish, swish! Leviathan must have been right behind him, because the sound of his slithering was so great.

Suddenly, the Wind Voice spoke to Kyle. “Leviathan is just around the corner. You have no time. Quick … jump over that hedge!”

Kyle saw the nearest hedge, which was right across the street from Engel. He jumped over it, and immediately the roots of the hedge came out of the ground and covered over him, hiding him from sight. The swishing sound grew painfully loud until it suddenly stopped. Kyle knew that Leviathan had stopped right next to the hedge, and it was all he could do not to scream. The snake lowered his head to the hedge, as if he knew exactly where Kyle was. He stared at a spot just a foot away from Kyle’s head for what felt like an eternity. Kyle knew that the snake was waiting for some kind of movement so that he knew where to strike. All of a sudden, there was movement right next to Kyle. Leviathan opened his mouth ready to strike. However, before he could, a bird flew out of the hedge and escaped. The snake stood there in a state of confusion, and Kyle wasn’t sure if the bird was a convincing ruse.

He dare not breathe for fear that Leviathan would hear him inhale and exhale. He lay motionless for about a minute and a half. Now certain that the snake had not been fooled, he was just waiting for Leviathan to turn back around and finish the job. Five seconds passed, then ten, then twenty. What is he doing? thought Kyle.

The silence was pierced by the shrill voice of the snake. “You can’t escape me, Kyle! So you may as well come out and face me like a man.”

Kyle was not deceived by this challenge of courage, for he knew that he couldn’t beat the snake, and he wasn’t about to stupidly die for the sake of bravery.

Leviathan continued to threaten him. “I know where your parents live, and I know where Marah lives. If you don’t come out now, I may have to pay them a visit.”

Trust, Kyle thought. I need to trust the Wind Voice. He remained motionless, and the snake was about to speak again when a noise echoed its way through the air. Leviathan turned his head and began to slither away toward the sound. The moment the noise hit Kyle’s ears he knew exactly what it was—Francis’s harmonica!

Thank … you … Francis, he told himself.

The vines and branches that had covered him slowly uprooted themselves—as not to make too much noise—and Kyle quietly rolled out from under them and found himself in the middle of someone’s lawn. Being surrounded by a hedge fence and afraid of being seen, he army crawled his way to the walkway that went straight up the middle of the yard and to the door.

As he laid there on the cold and abrasive cement slab, he looked up and through the opening in the hedge, and across the street was Engel. There was still some sort of force or barrier at the beginning of the street. On the other side was pure darkness. He lifted his head to see over the hedge. Leviathan was about a hundred yards away talking with Francis at the colonial house.

He laid back down and asked the Wind Voice, “What do I do now?”

“You must go down Engel Street and into the darkness,” the voice replied.

“Like I didn’t see that one coming,” Kyle said sarcastically. “Are you crazy?”

The Wind Voice responded, “You must enter a place so dark that your eyes will be rendered useless. You will be forced to trust solely and completely on me.” The Wind Voice spoke with confidence.

It’s a street! What’s so special about a street? Kyle Redding, a young man in high school, will find out as he takes a walk down Kingwood and discovers the mystical truth about a kingdom not of this world. Through his walk he will encounter various adventures involving moving trees, a giant snake, a man with a ridiculously large fishhook, and much, much more. Kingwood calls to everyone—including you, my dear reader—to discover what life-altering experiences happen when you walk down its path.

In an appeal to the classic art of Allegory, Jayson seeks to revive the style of CS Lewis and John Bunyan. Having an M.A. in Theology and years of ministry experience and world travel, his encounters and training have greatly influenced his writing. With an ability to take real life situations and blend them with an allegorical fiction, he combines old world style with modern world life to present the gospel in a new and exciting way.