All in the Record

One Couple’s Fight to Expose Deceit in Lancaster County, Virginia 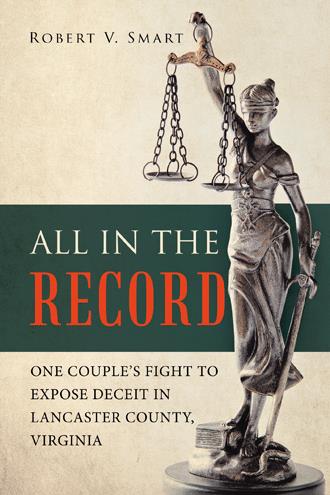 A Civil War veteran marries into some land and strives to develop a farm. A neighbor of the veteran is a freedman who is hired to help on the veteran's farm. The two work hard and grow to respect each other, but times are tough after the war and the veteran's farm eventually fails. The veteran has to split up his farm and sell half of it before he dies. Years go by and boundaries which had been established in the early 1900s become obscured during later fraudulent surveys. One fraudulent survey takes some of the land previously owned by the freedman and adds it to the land previously owned by the Civil War veteran. In the 1970s the author buys land in the area, and so becomes caught in a web of deceit. In 2013 another land surveyor exposes a fault in one of the earlier surveys. This discovery leads to a court trial. But because the 2013 survey did not uncover the full scope of faults in the earlier survey, the trial was impeded. The verdict from the trial overturned the true work of the 1912 court. Attorneys, real estate agents, land owners, and history buffs may all find this book interesting and useful.

Lancaster County, Virginia, is blessed to have some of the oldest and best-kept land records in the United States – and they would come in handy when Robert V. Smart sought to solve a mystery. Smart, who spent his career as a commissioned officer of the United States, first bought land on the Northern Neck in 1971, and a couple years later, he bought some additional land adjoining his first purchase. In March 2013, a certified land surveyor did a survey of land adjoining the land that Smart bought in 1973, and it raised numerous questions about who owned what. So, Smart and his wife, Jena, started conducting research, examining what Virginia code says about survey requirements and tracing the history of their land and the surrounding area … and they uncovered a magnificent deceit. They share what they discovered in this enlightening narrative that will fascinate and educate attorneys, real estate agents, landowners, and history buffs. In doing so, they unravel a mystery and highlight a fascinating story of hard work, hard times, love, and lies. Join the authors as they seek to resurrect the truth in All in the Record.

The author is a graduate of the United States Naval Academy, Class of 1966. He served two tours in Vietnam with the Navy before transferring his commission to the National Oceanic and Atmospheric Administration (NOAA). Early in his NOAA career the author was assigned to conduct hydrographic surveys. In preparation for this work the author was trained to accomplish geodetic survey work in order to tie hydrographic soundings to shore. This background in surveying proved useful to the author in 2013 when he began to unravel a fraud involving land boundary surveys done for him four decades earlier. The young sea-going officer pictured is the author. The picture was taken shortly after the author transferred his commission to NOAA, and near the time he purchased land in Lancaster County, Virginia.