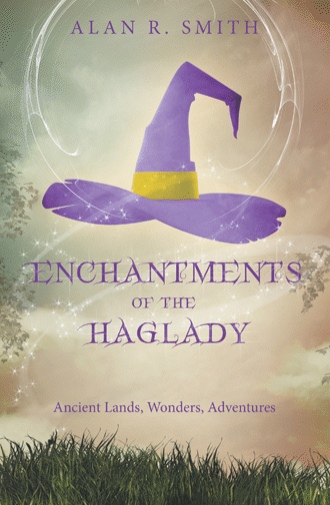 Kathryn’s senses were on alert. She knew someone, other than her friends, was standing only a few feet away, close enough that Kathryn could hear the rub of cloth against itself. All of a sudden, she felt as if time had stopped. She glanced to her right. There stood the figure of a woman. Kathryn whispered, “Is it her?”

“Help,” Kathryn shouted to herself. She couldn’t hear herself scream.

Their encounter was inevitable, only seconds away. The Haglady moved closer.

She composed her emotions for a second, and then in a hushed voice, “Think. What do I do? Should I run? Yes, start running!”

But Kathryn could not move her legs; they were locked in place. Her feet had lost feeling; it was impossible to even move her toes inside her sneakers. Kathryn’s fear grew.

“Oh no, what if she lifts her head,” was all Kathryn could think as she could not move her eyes from the brim of the magical lady’s velvet hat.

Kathryn’s neck tightened even more. “Oh no, I can’t breathe,” she cried to herself.

The frame of the purple hat began to move slowly upward exposing a yellow scarf wrapped loosely around the Haglady’s neck. A light gust of wind washed over them, a dust devil swept around the pair, and Kathryn’s nose recognized a familiar fragrance. She tried to reflect on the perfume, but another matter was immediate. The unexpected, potential danger was upon her and she did not know what to do.

It took a moment, but Kathryn grasped what she was seeing. In thought, “She is floating.

The very slightest tip of a chin was now visible as the visitor inched ever closer to Kathryn. The hat continued to lift, soon to expose a face Kathryn refused to gaze upon. She had been warned not to look at those eyes. Kathryn knew she was going to look at the Haglady’s face. Was her life almost over?

Kathryn was about to explode with fright. Their eyes met!

Antonio’s early life was one of poverty, of hunger, and of begging. It was made more fragile when disease arrived on merchant ships from Africa. By age nine, Antonio was on his own, to survive if he could, to sneak around in the shadows learning how to use the darkness of the night to find food, to protect himself, to stay clear of those who stole children and sold them to ships’ captains, and to steal bread from unwatched kitchens. He had to learn all of this and more.

Carefully, slowly, his eyes wide with caution, Antonio crept out from behind the jars, making sure no one could see him. It felt good to stand, to stretch his legs. He looked and saw no one. He took another step forward and saw a figure off to his right. Antonio stiffened. Lazlo, the dock guard, trying to stay out of the wind, had been standing against the same warehouse wall as Antonio. He had observed the same exchange at the ship’s gangway.

Lazlo was moving in the direction of the ship, the spot where the captain and merchant had met moments ago.

The guard was almost to the center of the dock when he noticed Antonio. However, he quickly shifted his eyes back to the ship. The guard began to move quickly. Antonio thought to run, but the guard was not concerned with the street beggar. Lazlo kept looking back at Antonio, and again to the ship, telegraphing a secret Antonio could not decipher.

Antonio’s eyes moved in the direction of the guard’s focus.

In an instant, Antonio was running like he had never run before. Not from the guard, but in the same direction as the guard, headed for a treasure on the ground. Antonio did not know why the pouch was important, but he, like Lazlo, wanted the trophy.

A certain collision of different forces—a poor waif with a miserable fool, a hungry boy without a future, and an oaf having wasted his past—both living for the moment, knowing only one can survive.

Antonio glanced at Lazlo to measure the distance to the prize, and he heard Lazlo’s vile curses and threats, and saw a knife in the hand of the overweight guard. The guard’s last sprint forward surprised Antonio.

At full speed, Antonio reached down and grasped the rain-soaked pouch of Pavel Delyan. As he dipped, he heard the blade of Lazlo’s blade split the air above his head.

The next few steps were strides for life or of death. The pushing wind aided Lazlo’s pursuit of Antonio. He was only a step from the boy, a mere arm’s length from his prey. Antonio could hear Lazlo’s frenzied breathing close behind; Lazlo was so close Antonio could smell the derelict’s onion breath.

Antonio’s fear was greater than Lazlo’s want—Antonio was fleeing for his life.

Enchantments of the Haglady explores a young girl’s dream world and a young boy’s struggle to survive. Each overcomes heartbreak, misfortune, and calamity through their strength of character and belief in themselves.

Enchantments of the Haglady walks the line between historical time travel and fantasy, balancing the two with ease as it explores the travels of two orphans—a girl from the twenty-first century and the other a boy from the eleventh century. They grow strong in spite of their tragedies and meet on the docks of Venice just before the First Crusade.

The enchantments will transport the reader to ancient lands of pirates, shipwrecks, kidnapping, an emperor and an empress, a princess, first infatuation that crosses over centuries, and the always-present and mysterious Haglady.

Alan R. Smith spent 37 years as a Marine serving on both Active and Reserve duty. He has traveled extensively throughout the world studying people and their cultures. His passion is bringing stories to students from elementary school to the university level. He has found all his students and friends love stories of where they “have not been” and once they find history as a story, not facts to be memorized, they want more of history’s “characters.” His goal is for his readers to wrap themselves with the clothes of the story, inserting themselves in the past.