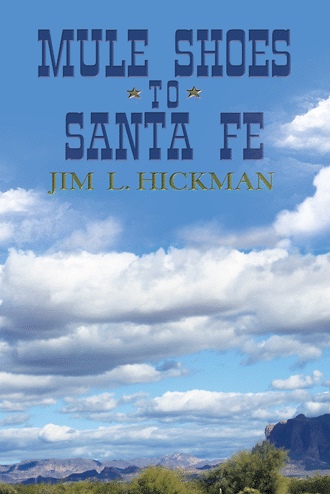 “In a few hours we are in the outskirts of Independence. There sure isn’t any grass around here, as the caravans camped here since early spring, have trampled it, or their animals have eaten it. All the activity has slowed down, but we are one of the first groups of traders to come back from Santa Fe, and a crowd starts to follow us. We are sure a rough looking bunch, after about eighteen hundred miles of riding, fighting, walking and surviving. I’m leading, and look back at our outfit, and am proud of the condition the horses and mules are in. They sure show we have cared for them, and look better than we do. Only one has a scar from an arrow. Buck is trotting beside me as we start toward Danny Greenup’s wagon barn. He hasn’t paid any attention to the dogs barking and running alongside us, but he suddenly growls one of his terrible growls, and the hair on his neck stands straight up. We are right in front of Danny’s barn, and there, standing with his feet wide apart, and a scowl on his dark face, is Mr. Quintara, Roberto’s Pa.

“Where is Roberto?” he shouts.

I stop, and we all stop. I look at him, and say quietly:

“Why, last time I saw him, he was in a jail cell at Bent’s Fort, being guarded by soldiers so he wouldn’t get hurt any worse.”

Quintara makes a motion, and before I can get my gun out, a braided leather whip comes at me from the side. It snaps around my neck, and next thing I know, I’m choking on the ground and Quintara is standing over me, with a long bladed knife in his hand. Then I hear a scream, and there is my pretty Samantha. For the next couple of minutes I’m too stunned and trying to breath, to do anything, except watch what happens. Samantha turns into a wildcat, scratching and spitting in Quintara’s face. A horse races up, and another, and Samantha is joined by two Mexican women, who are cursing Quintara in Spanish. They drive him to his knees, the knife is knocked to the ground, and a cocked pistol is held against his head. It’s in the hands of Flor. Big Buck is also right in his face, and probably about all Quintara can see are those gleaming white fangs. Apparently a Mexican vaquero, or cowboy, had laid his whip around my neck, but within a few seconds has disappeared into the gathering crowd. Alex and Tim are still on their horses, rifles in hand, and offering to shoot anyone who wants to enter the fray. There is a shot. Marshall Baer is standing behind me, pistol in hand, and right by him is Danny Greenup. The Marshall’s deep voice rumbles as he speaks.

“Don’t anybody move till I tell you to. Danny, get that whip off this young fellers neck.” Danny moves over to me and unwinds the leather thong from my neck. What a relief.

“Now, Danny, pick up that knife, and keep it. You two with the rifles, just sit tight. If anyone pulls a gun besides me, shoot them. You, little lady, put that pistol away.” Flor grins, and slowly puts the gun in its holster.

“Now, Danny, tie this gentleman’s hands behind him, and I’ll meet all of you in Danny’s barn as soon as I get this feller safe behind bars.” He looks closely at Quintara.

“I’m not joking with you. You were about as close to death as you will be till it actually happens. Come on!”

He jerks Quintara to his feet and pushes him ahead as he goes through the crowd.

I’m on my feet, and Samantha has her arms around my neck, and is sobbing against me. I hold her close, and then we follow as Tim and Alex lead the way into Danny’s barn.

Its half an hour till we have the horses and mules tied safely in the corral, and are gathered in the open space of the barn. The Marshall is there, and Danny, as well as Aaron Greenup, and our group. The Marshall holds up his hand for quiet, and just then there is a shout from outside the barn.

“Hey, Greenup!” I know that voice.

A burly figure strides through the door, and Josh is standing there, grinning at us.

“Heard there was some fightin fun, and shore didn’t want to miss it!”

The Marshall shook his head.

“Not another one!” he said, and shook hands with Josh”.

A Smoky Mountain family raises Morgan horses and mules for use by all “settling of the West” activities, including Santa Fe traders, pioneer settlers, soldiers, and miners.

The story starts in Tennessee in 1840, with three strong young men, cousins, starting West with horses and mules, immediately being victims of an attempted robbery, which leaves one robber dead and the boys with a reputation and part of an international dispute.

The story follows their escapades and increasing tough reputations to the Ohio River and as they travel by barge to the Santa Fe trail and on to Santa Fe, where they trade successfully, narrowly avoiding the Mexican army. They return, much wiser, to several surprises.

The story involves a number of women and some tragic happenings and some joyful occasions and a display of faith in God and humanity.

Jim Hickman and his wife, Gemma, live in Clay, Alabama. Growing up during the Great Depression of the 1930’s, then WWII, Jim traveled with his family over much of the Ozarks, Kansas prairies, and the Rocky Mountains of Colorado and Wyoming. He attended High School at La Junta, CO, just a short distance from the Santa Fe Trail and Bent’s Fort, which he writes about. Jim served as a Commissioned Officer, USNR, on active duty during the Korean War. He started his career with the U.S. Forest Service as a Smokejumper, stationed at Missoula, Montana. His life of adventure included being an avid skier, pilot, white water racing, travel in all 50 states, Canada, Mexico, Brazil, Africa, Thailand, Scandinavia, NW Europe, E Europe and W Mediterranean. He retired from the Forest Service in 1993, with 40 years of government service, including military. He has been writing non-fiction short stories for 12 years, and has self-published one book of short stories.