My Art Walk to the Contemporary Masters 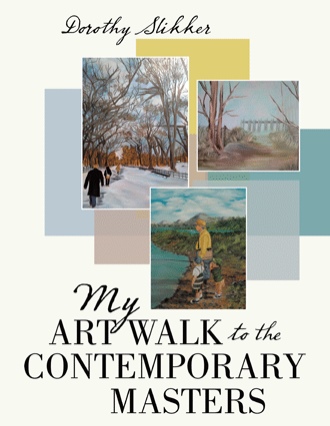 Take my hand as we walk along the path to my becoming a “Master Artist”. How was this accomplished? It took thirty-eight years for me to accomplish this fantastic step in my life. Like all young people I had art in grammar school, we did drawing and ceramics. In the 7th grade I made a girl carrying a bible. The other kids made the ring ash trays for their parents. Later in the 8th grade we did drawings for the cafeteria art show, I did a tree in water colors and I took 1st place. This really got me hooked on art.

This turned me on to the desire to take Art in High School. My father said no to that notion and made me take the direction of business. He stated that you couldn’t make a living in art, but you could support yourself in a business environment. This was the way of thinking in the 1950’s. I never picked up a brush until 1976. I had married, started my own business and had three sons. Still I wanted to PAINT.

John told me that if I wanted to paint take those lessons you keep talking about and paint. I started with Lois Fox at the Mize Gallery in Bakersfield, CA. One of my first paintings was the Fog. It was one of the most awful paintings that has ever been done, did I ever get a lot of voice on that one. Every one made fun of my desire to be a serious artist. It broke my heart, but I would not let them know how much it hurt, I just kept going forward with more effort.

As I kept painting I started entering the Kern Co Fair. The first year I took 2nd place in the amateur division, the 2nd year I made Honorable Mention, This brought on the teasing and contempt for my work, saying things like you can’t place. You are losing it. It took at least eight lessons before the teacher did a black and white this helped me to understand the depth, shadowing and the dimensions of the subject I was painting. All in all I did not enter the fair again it hurt too much to fail. Actually I was not failing I was growing in my knowledge, but this I did not understand. I continued to take lessons and would paint with the traveling artist that came to the gallery and you could say I was a happy camper.

Then came retirement we moved to the coast in Cayucos, I proudly joined the art group there attending the meetings and sitting the gallery. This was my first experience at this capacity of gallery shows. As this worked out a new comer was not accepted as an equal, the shows were judged by the artist association officials, their friends were always the winner. It took me awhile to accept this fact so eventually I just painted at home, going out and taking my own photo’s and painting in my kitchen. This went on for about eight years. John and I moved to Pahrump, for the heat and it was good for my arthritis. Here I met some people and they saw my work and told me that I should be showing in the Court House. Hey who do I contact to make that come about? They gave me a phone number and I called, I had contacted Bernie Toy, he told me to bring some work down on Friday and they would put me in the show. While I was there two women came in and introduced themselves. Loretta Lindell and Jan Lindsay, officers of PAC. They asked me what I wanted out of PAC and I said to be as busy as possible with my art. They put me on committee’s and put me to work. It did not take long to get acquainted with the community which I now live and work in. Art & Sol Ah Yes. I had started giving lessons to students and decided to have them share a booth with me. During my first Art & Sol I met this lady Doris Smith she came up to me saying we are going to be friends. I asked her why? She replied we paint alike, so we will be good friends. She was oh so right.

“Dorothy Slikker made an immediate impression on us with her masterful technique and the beauty of her compositions. Her works range from realistic to realistic-impressionistic, portraits, landscapes and animals, subjects in genre which is unforgiving of the slightest technical misstep, and with Dorothy’s work, the viewer will find none! Her perfection is formidable. For us, Dorothy is eminently entitled to a prominent place in any publication or website with the name ‘masters’ because she truly is a master painter.” —Despina Tunberg, Curator

Dorothy Slikker’s oil and acrylic paintings on canvas incorporate landscape, animals and people. Having trained under painter Robert Warren, her learned method involves the use of a soft orange under-layer and a “black study” which helps to set the shadows and map out the composition’s depth prior to the rendering of the final image. Slikker mixes her own colors to achieve a uniquely soft palette verging on the impressionistic. As an oeuvre, her works communicate a powerful sense of home and belonging.