Grammar Rules: How to Sound Smarter

Think you know how to talk real good? Test yourself: These grammar rules will surprise even the experts.

By Paul Silverman and Sarah Wharton from Reader's Digest Magazine 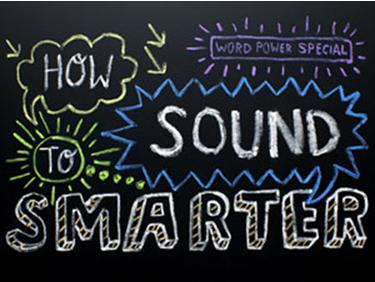 In this world of OMG and autocorrect, does grammar stand a chance? Below, our guide to the most confounding rules will restore your love of language.

Why: Grammar sovereign H. W. Fowler banned the long form almost a hundred years ago. So someone who is health conscious might seek preventive care; responsible homeowners might take preventive measures to keep their roof from leaking.

Why: The rich and famous are widely known (and wealthy). But the rich and infamous have a reputation of the worst kind (… and money, which doubtless has dubious origins). Another way to look at it: Unless Aunt Donna’s chocolate chip cookies are notoriously evil and disgraceful, they are famous, not infamous.

Why: A photograph evokes emotion; a joke evokes laughter—evoke means “to elicit or call forth.” Save invoke for when you mean “to call on a higher power, petition for support, or implement” (for example, “Allison invoked Robert Frost for her first assignment” or “The principal invoked the aid of the teachers”).

Why: The two may sound similar, but their meanings are distinct: Denounce is “to condemn publicly or accuse formally” (“The judge denounced the CEO for insider trading”), while renounce means “to give up or refuse to follow” (“The CEO renounced his not-guilty plea”).

Why: Careful speakers who wish to convey a lack of bias want to use disinterested. Speakers who don’t care about such grammatical subtleties are uninterested.

You never mean: “Jane, Andrew, and myself are going…”

You always mean: “Jane, Andrew, and I are going…”

Why: Myself is notoriously misused for I or me, often because people are trying (too hard, it seems) to sound smarter (wrong: “My husband and myself have belonged to the country club for years”). Myself is a pronoun best reserved for reflexive uses (when an action is directed toward the subject: “For Christmas, I gave myself a gift”) or for emphasis (“I myself have done that many times”).

Why: The difference is clear-cut, yet writers and speakers sometimes muff these two: Simply, former is the first of two; latter is the second. (And while we’re at it, formerly vs. formally: The former means “at an earlier time,” as in “Formerly the governor of California, Schwarzenegger …”; the latter means “by an established form or structure,” as in “The school is formally called the University of California at Los Angeles.”)

You almost never mean: neither/either are

You almost always mean: neither/either is

Why: Both neither and either are singular pronouns and should take a singular verb. Confusion sets in when the verb appears far from its subject or when a plural object falls after it: “Turns out, neither of the usually mischievous dogs were [read: was] responsible for tearing up the pillows; the cat wast to blame.”

You never mean: fall between the cracks

You always mean: fall through the cracks

Why: Logically speaking, you can’t fall between an opening; you fall into or through it. As such, don’t let logic fall through the cracks when you use this idiom.

Why: Moot‘s most common meaning is “deprived of practical significance.” Mute means silent. So while they might want to be mute about a moot point, careful speakers will be vocal about the difference.

Why: When you want someone to get what he deserves, you hope he reaps his just deserts. But on her birthday, a particularly well-behaved three-year-old might be allowed in just desserts.

Why: Quite simply, modern covers it. Modern-day is a redundant term. Modern speakers will sound smarter by using the superior word.

Why: So-called introduces a term as falsely, improperly, or commonly referred to as something. So by default, it covers the need for quotation marks (or a speaker’s air quotes).

Why: While both mean “extreme,” the terms are often confused in relation to money. Exuberant refers to unrestrained enthusiasm or flamboyance; exorbitant means “exceeding an appropriate amount.” Another way to look at it: Exuberant use of a credit card leads to an exorbitant bill down the road.

Why: Come refers to movement toward the speaker (Henri says, “Come to Paris!”); go denotes the opposite (After you’ve stayed two months, Henri says, “You should go”). But idiomatic use sometimes clouds this rule, as “I’ll come over” is more comprehensible than “I’ll go over.”

Why: Great grammarian Bryan Garner reminds us that “jealousy connotes feelings of resentment toward another, particularly in matters relating to an intimate relationship,” while “envy refers to covetousness of another’s advantages, possessions, or abilities.” So your ex is jealous of your new boyfriend but envious of your ability to use these two terms correctly.