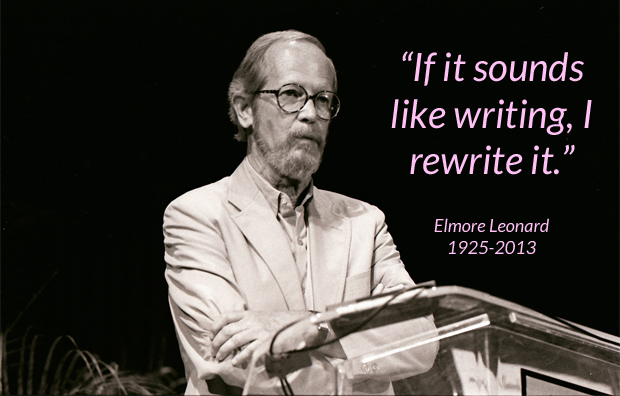 uploaded to WikiMedia Commons by MDCarchives

Best-selling American writer Elmore Leonard created a legacy of great crime literature including Get Shorty, Out of Sight, and Justified, but he also left behind his 10 Rules of Writing. Published as an 89-page book in 2007 and enlivened by his usual terse, no-nonsense but supremely amusing style, we took the liberty to condense it here.

1. Never open a book with weather:

If it’s only to create atmosphere, and not a character’s reaction to the weather, you don’t want to go on too long. The reader is apt to leaf ahead looking for people.

They can be annoying, especially a prologue following an introduction that comes after a foreword.

3. Never use a verb other than “said” to carry dialogue:

The line of dialogue belongs to the character; the verb is the writer sticking his nose in. But said is far less intrusive than grumbled, gasped, cautioned, lied.

4. Never use an adverb to modify the verb “said”:

… he admonished gravely. To use an adverb this way (or almost any way) is a mortal sin. The writer is now exposing himself in earnest, using a word that distracts and can interrupt the rhythm of the exchange.

5. Keep your exclamation points under control:

6. Never use the words “suddenly” or “all hell broke loose”:

This rule doesn’t require an explanation. I have noticed that writers who use “suddenly” tend to exercise less control in the application of exclamation points.

Once you start spelling words in dialogue phonetically and loading the page with apostrophes, you won’t be able to stop.

In Ernest Hemingway’s “Hills Like White Elephants” what do the “American and the girl with him” look like? “She had taken off her hat and put it on the table.” That’s the only reference to a physical description in the story, and yet we see the couple and know them by their tones of voice, with not one adverb in sight.

You don’t want descriptions that bring the action, the flow of the story, to a standstill.

10. Try to leave out the part that readers tend to skip.

My most important rule is one that sums up the 10: If it sounds like writing, I rewrite it.